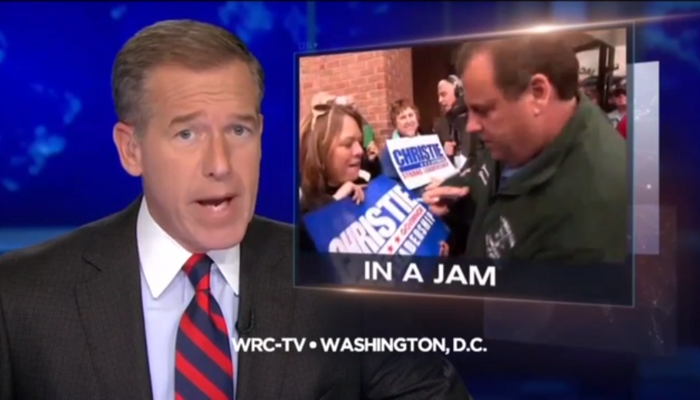 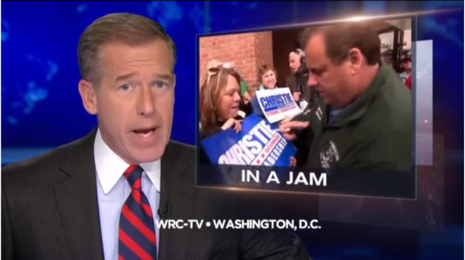 At the time, liberal reporters considered Christie one of the strongest candidates to oppose former Democrat Hillary Clinton. “The only guy that could have won,” MSNBC’s Chris Matthews declared on ABC’s The View in January 2014, a few days after the ‘Bridgegate’ story broke: “I think Christie would have been a hell of a candidate before this mess.”

Believing this, the media elite quickly got out their truncheons and started whacking away. “A big problem for a man with big ambitions,” NBC Nightly News anchor Brian Williams gravely intoned on January 8, 2014 immediately after the story broke, calling it “a full-blown scandal” for Christie.

NBC’s Chuck Todd told Williams a few minutes later: “It reinforces a negative stereotype that you and I both know has been out there for years about him, that he is just a bully at heart….This looks like this was a mean and bully-like decision.”

That night on CNN, Jeffrey Toobin insisted Christie was dead meat: “It’s all over for Chris Christie. This is it….I mean, this is devastating. Forget it.”

“There’s a chance that it’s enough to kill any reasonable chance for him becoming the Republican nominee,” MSNBC analyst John Heilemann echoed the next day on Morning Joe.

The damage to Christie, of course, came from the portrait painted by a relentlessly negative media. ABC, CBS and NBC first mentioned the allegations on their January 8 evening newscasts, then supplied even heavier coverage the morning of January 9, generating a combined 34 minutes of coverage during that first 24-hour news cycle. “Chris Christie in crisis!” ABC’s George Stephanopoulos exclaimed at the top of Good Morning America on January 9.

The second 24 hours were even more intense, with those national broadcast networks cranking out an additional 54 minutes, bringing the 48-hour total to an astonishing 88 minutes. “It was Governor Chris Christie’s worst day in politics ever,” claimed Good Morning America reporter Jim Avila.

Reporters defended their obsessive hammering of the GOP governor. “This is, you know, welcome to the NFL,” NBC’s Todd smirked on the January 9 Today show. “He’s had a free ride, if you will. Well, now, welcome to the vetting process….This is what happens when the bright lights start burning.”

Political vetting, of course, is about bringing relevant facts to light, but TV viewers also heard irresponsible innuendo. On CNN, anchor Ashleigh Banfield preposterously suggested the investigation could lead to a “felony murder” charge, “because it is a felony to do this kind of thing if it can be proven to shut down those lanes for no good reason. And then if a death results, that’s a murder.”

MSNBC’s Matthews, who supposed Christie was the strongest candidate to face Hillary, pounded the story night after night. “This is not yet a Watergate, but the more we learn about Chris Christie, the more he does look like Richard Nixon,” Matthews smeared on January 15, with a “Tricky Christie?” graphic on-screen. His Hardball program spent 12 minutes smashing Christie that night, a full week after the story first broke.

This approach dominated for months. “A man once considered the Republican Party’s best hope to capture the White House in 2016 now finds himself embroiled in scandal,” ABC’s Dan Harris maintained on Nightline on March 28, 2014.

Then in September, the networks learned federal investigators had found no evidence that Christie did anything wrong. In the first 24 hours after that news broke, ABC and CBS said nothing, while NBC’s Today and Nightly News gave it less than a minute of airtime, combined.

In December another investigation — this one conducted by a panel of New Jersey legislators, eight Democrats and four Republicans — also declared there was no evidence that Christie knew about the bridge shutdown in advance.

And that was that. The disparity on the broadcast networks — which, you’ll recall, generated 88 minutes of airtime in the first two days — was more than 100-to-1 when you compare the massive attention paid to the initial charges to the meager 48 seconds for the December report by a Democratic-led panel essentially clearing the governor.

Reporters loved calling it ‘Bridgegate,’ summoning images of the grand Watergate scandal. But ‘Bridgegate’ is really a case study in how the liberal media thugs will use their clout to rough up politicians who might stand athwart their agenda.

For more examples from our flashback series, which we call The NewsBusters Time Machine, go here.