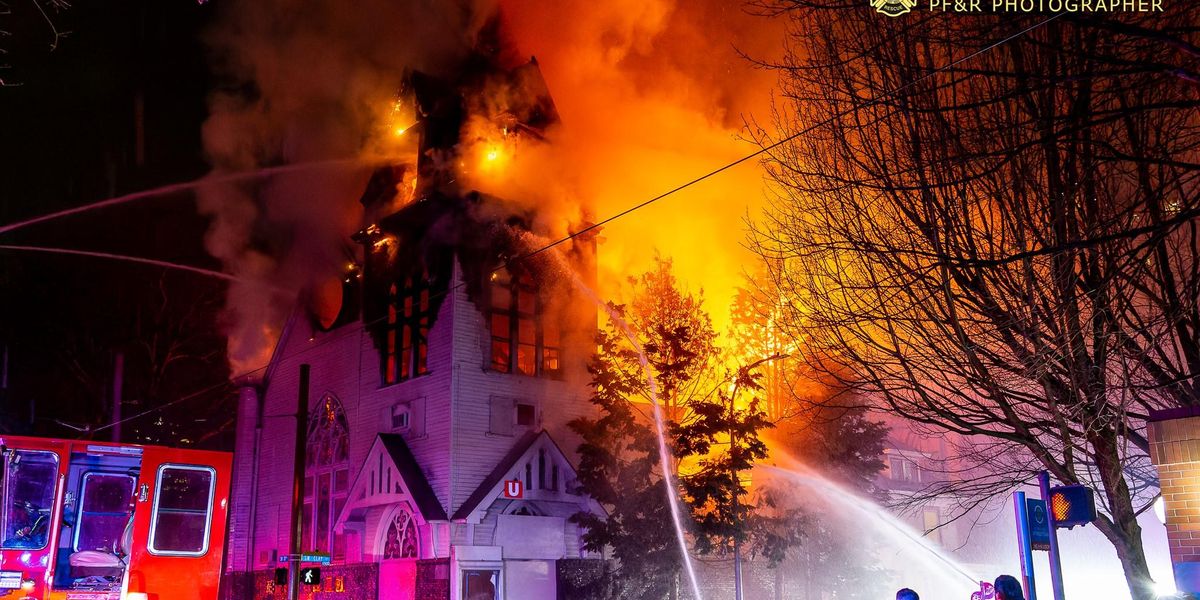 A 27-year-old transsexual has reportedly admitted to burning down a historic Korean church in Portland, Oregon, underscoring how he wanted to “take credit” for this act of apparent anti-Christian hatred.

In response to multiple reports indicating that the structure was fast becoming an inferno, 12 fire engines, six ladder trucks, four battalion chiefs, and 75 Portland Fire and Rescue Personnel arrived on the scene.

Portland Fire and Rescue indicated that the church was not occupied when the three-alarm fire broke out.

According to the Multnomah County District Attorney’s office, by 5:40 p.m., the south side of the church had partially collapsed along with the roof. The fire had also spread to a neighboring home, which was evacuated.

KOIN reported that demolition crews began tearing down the remainder of the church this week.

The toppling of its 35-foot steeple, which reached a height of 70 feet, was captured on video:

u201cA construction rig toppled the charred wooden steeple of the historic former Portland Korean Church shortly after noon on Friday u2013 the first step in demolishing the building after it was ravaged by a fire Tuesday night.nnVideo by @Vickieaconnornnhttps://t.co/UVVhAAuG9xu201d

Mike Schmidt, the leftist Multnomah County District Attorney who made a name for himself by refusing to prosecute BLM rioters and other violent suspects, announced that 25-year-old Cameron David Storer was arraigned on four charges, including two counts of arson in the first degree, one count of arson in the second degree, and two counts of burglary in the second degree.

Storer, a transsexual who prefers to be called by a woman’s name, reportedly walked into the Multnomah County Detention Center on Jan. 4 to confess to setting the fire, claiming that he wanted to “take credit” for the attack and detailing how he had gone about doing so with a Bic lighter.

Court documents indicated that Storer lit papers on fire in the church, waited nearby to make sure it had spread, then walked over to Plaid Pantry to observe his handiwork.

The alleged arsonist claimed to have taken 10 oxycodone daily and to have been addled by schizophrenia. He also suggested that voices had told him to burn down the church.

Andy Ngô reported that the bearded suspect is currently being jailed in a co-ed medical dorm in a single cell.

In light of Schmidt’s recent admission that Multnomah County can’t bring all dangerous criminals to justice — letting alleged stranglers, domestic abusers, sex offenders, human traffickers, child abusers, and berserkers of various intensities off without any penalty for their misdeeds — it is presently unclear if Storer will ultimately be penalized for the alleged crimes for which he has taken credit.

The Portland Korean Church, which the Oregonian noted was owned by Hadi Nouredine, a Beaverton and Lake Oswego dentist, was also targeted in September 2020.

Christian churches have been routinely targeted in Portland, primarily by leftist marauders.

A transsexual Antifa militant was charged with a Nov. 3, 2020, attack on Saint André Bessette Catholic Church — a church known for housing, cleaning, and feeding the city’s poor.

Father Tom Gaughan said, “The actions of this one individual has forced us to cease our outreach and its hundreds of people we normally give food to.”

u201c”The act of one person has prevented us from providing for hundreds of people.”nnSurveillance video shows crowd marching on W Burnside last night. About 15 sec in someone comes up & smashes the windows @ Saint Andre Bessette Church.nHow to help: https://t.co/ePnlYXsSoun@KOINNewsu201d

In April 2021, the First Christian Church was targeted in an attack, having its windows shattered.

At least four Catholic churches were vandalized by radicals with threatening and vulgar remarks in summer 2021.

The century-old Portland Stake Tabernacle in southeast Portland was abandoned in summer 2022, after its Mormon congregants fled the state, citing the leftist violence plaguing the city.

The Democrat-run city scores a three on Neighborhood Scout’s crime index, where 100 is safest. The chances of becoming a victim of a violent crime are one in 187. In the Democrat-controlled state of Oregon, the odds are one in 342.