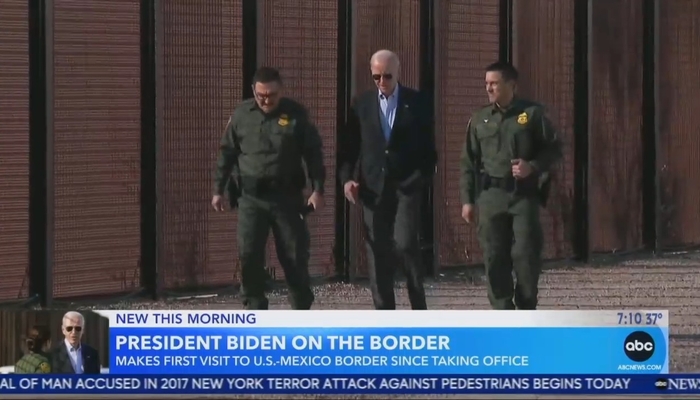 Despite what the White House has argued, Sunday marked President Biden’s first visit to the U.S.-Mexico border in his entire life and, sure enough, Monday morning’s broadcast network flagship news shows put a positive spin on the trip, with Biden “project[ing] that he is on top of this” and “setting the tone” on a crisis while facing “critics from both sides” of the spectrum.

ABC’s senior White House correspondent Mary Bruce boasted from Mexico City on Good Morning America that Biden was “really setting the tone with that visit to the border yesterday” since “[h]e is facing huge pressure to do more on this issue.”

She continued with the kind of tone and tenor you’d expect from actual state-run media at NPR or somewhere even more obsequious:

With tens of thousands of migrants crossing the border illegally every month, the President knows this is a real political liability for him. So, for the first time he got a firsthand look, spending time meeting with local officials, law enforcement, even spending some time there walking along sections of the border. The President’s trying to project that he is on top of this. And he has announced new plans to try and tackle this crisis[.]

Co-host Robin Roberts huffed a few moments later that “Republicans are pushing back hard on the President’s plan including the governor of Texas,” leading Bruce to explain that “Republican Governor Greg Abbott” greeted Biden “on the tarmac yesterday” in El Paso “and he handed the President a letter, outlining the steps that he would like to see him take to fix this.”

Ending on a pro-Biden note, Bruce said the President doesn’t believe he’s the problem and instead it’s the GOP: “[T]he President says the real problem here is Republicans back in Washington in Congress who have failed to act on comprehensive immigration reform.”

NBC’s Today kept the focus on how it was Biden in charge while his “critics” griped. Co-host Savannah Guthrie teased: “Biden at the border. The President makes his first visit there since taking office. What he’s saying about how to address the flood of migrants and critics saying it is too little, too late.”

Chief White House correspondent Kristen Welker made Biden sound like the moderate with “criticism from both sides” by invoking Abbott (and, of course, his party ID) and “[h]umanitarians” who “say the President’s new immigration policy could put lives in danger.”

Saying the crisis provided “a fraught backdrop,” Welker shared that “Biden met with Border Patrol officials and toured a services support center,” but conceded “he did not directly meet with migrants”.

Like with CBS Mornings, NBC’s Today had to include a sob story. For Welker, she spoke with a sobbing Maria Rodriguez, who fled “violence in Venezuela with her two children and a nephew” by spending days in a garbage truck.

Speaking of CBS, co-host and Democratic donor Gayle King began their coverage by saying Biden was “in Mexico City this morning for a summit with the leaders of Canada and Mexico” with “[t]he big issue” being “the immigration crisis.”

White House correspondent Weijia Jiang said Biden spent “several hours in El Paso, Texas, home to one of the busiest ports of entry” as “Republicans are blaming him for the record number of people who are crossing illegally…and blasting that visit as nothing more than a photo-op.”

Jiang continued which, to her credit, including two Abbott soundbites and a quote from his letter (click “expand”):

JIANG: Biden met with workers at a center for migrant services Sunday who told him they need more aid from the federal government.

BIDEN: They need a lot of resources and we’re going to get it for them.

JIANG: Earlier, Republican Governor Greg Abbott welcomed the President to Texas, then criticized him for not coming sooner.

ABBOTT: It just so happens he’s two years and about $20 billion too late.

JIANG: Abbott said as much in a letter he handed the President on the tarmac.

ABBOTT: Here’s the deal, he’s never called me to talk to me about the immigration issue. Now I’ve provided him a letter that provides tangible, concrete solutions that will stop illegal immigration.

JIANG: Also in the letter, Abbott blamed Mr. Biden: “This chaos is the direct result of your failure to enforce the immigration laws that Congress enacted.” Last week, President Biden announced new restrictions on migrants seeking asylum amid growing pressure from both Republicans and Democrats. The new policies expand the Trump-era COVID ban known as Title 42. Although the administration will also offer more legal pathways for migrants from Haiti, Nicaragua, and Cuba.

After video of another sob story of an illegal immigrant asking for Biden to let her stay in the U.S., Jiang was the lone reporter to give viewers the reality of Biden’s sanitized visit: “President Biden did not visit any of those areas where migrants have been camping out, nor did he see any large groups arriving, something that his critics have been very quick to point out.”

Monday’s White House propaganda was brought to you by advertisers such as Google (on ABC and CBS) and Sandals (on NBC). Follow the links to see their contact information at the MRC’s Conservatives Fight Back page.

To see the relevant transcripts from January 9, click here (for ABC), here (for CBS), and here (for NBC).

Poll finds almost a quarter of Millennials get their rent paid by their parents, others get groceries, utilities paid
MSNBC’s Hasan: ‘Florida’s Gone From Don’t Say Gay to Don’t Say Black’
Nets Ignore Pro-Life Activist’s Acquittal on Bogus Biden Admin Charges
Philly bus driver reportedly thwarts carjacking by barreling toward crooks with his 40-foot vehicle, blocking their escape, and scaring them away
China Accuses U.S. of ‘Reckless Warmongering’ After Leak of Memo Predicting War With Beijing by 2025