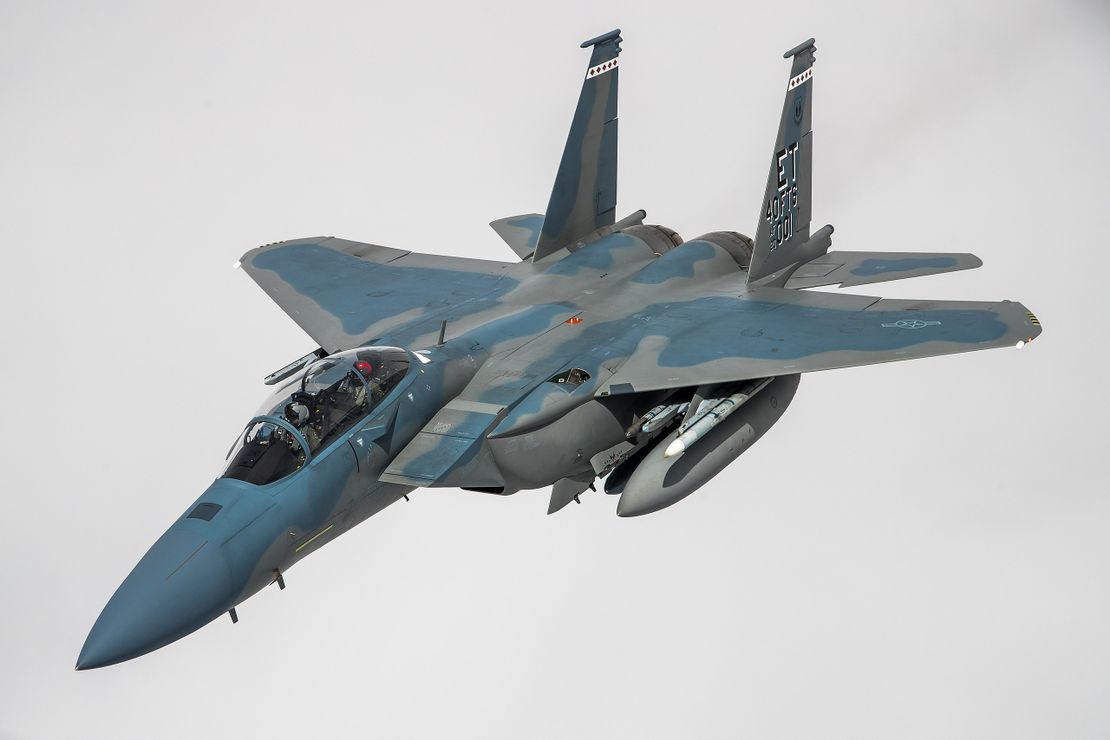 The F-15 Eagle jet fighter first flew in 1972, entered service in 1976, and (except for the Strike Eagle ground-attack version) hasn’t been manufactured for USAF use since the mid-’80s.

So why is the Air Force spending billions to produce more fourth-generation fighter jets whose requirements were first set down in 1967?

For starters, the F-15EX Eagle II is not your father’s (or grandfather’s) F-15. It’s a mostly-new beast with a very important job to do.

Because sometimes you need the stealth provided by the fifth-generation F-22 Raptor or the F-35 Lightning II. Other times, you need a crap ton of missiles. That’s where the F-15EX comes in.

The Eagle II recently passed another development milestone, making it “one flight closer to becoming the most heavily armed American fighter jet,” according to 19FortyFive. During a test flight over New Mexico, an F-15EX fired two munitions from two hardpoints. Those are the mounts under the wings or fuselage where missiles or bombs are attached.

Exclusively for our VIPs: A Tasty Movie Review: ‘The Menu’

Eventually, the Eagle II will have hardpoints for 12 air-to-air missiles, making it the most heavily armed air superiority fighter in the Pentagon’s arsenal.

You might why that’s even necessary when a single F-22 has been proven at Red Flag training exercises to be able to shoot down 20 or more enemy fighters without taking a loss.

There’s a difference between administrative kills and real-world kills. When staying stealthy, an F-22 doesn’t put missiles on external hardpoints. Instead, it carries its missiles in an internal bay, shrouded from enemy radar. But those internal bays can’t carry anything even close to 12 long-range missiles. Same goes for the F-35, which as a strike fighter, is more likely armed to carry out air-to-ground missions.

So when you read that a single F-22 can take out 20 enemy planes, remember that it’s only firing administrative — imaginary — missiles. In the real world, an F-22 pilot would fire off four or size missiles, return to base, rest up, get his fighter refueled and rearmed, and then return to the battle… that’s already over by then.

More important than just having a bunch of missiles, the F-15EX will have a radar and sensor suite on par with the much more modern F-35. The F-35 is so advanced that each individual plane is virtually an entire airborne warning and control system, data-linked in real-time to other planes, ships, and other weapons systems all over the world.

The Eagle II takes the world’s most successful fourth-generation fighter jet and gives it advanced capabilities that the Eagle’s designers couldn’t have imagined 50 years ago.

The F-15EX isn’t stealthy, although it does have a reduced radar cross-section compared to the original Eagle. But it will add an awful lot of firepower to our rapidly changing Air Force, protected by its stealthy siblings.

The F-22 is our top-of-the-line air superiority fighter but, thanks to poor decision-making during the Bush and Obama administrations, production was capped at 187 operational airframes, instead of the 450 required by our national security priorities.

Worse, the last Raptor came off the line in 2011, and the F-22’s replacement — currently in early development as part of the Next Generation Air Dominance Program (NGAD) — won’t come into service until sometime in the 2030s.

That leaves a serious gap in the Air Force’s air superiority needs, as the current fleet of F-15C fighters nears the end of its service life. We can’t build any more F-22s because the tooling was destroyed years ago. And while we could theoretically build F-35s at a faster clip, none of the services can integrate the all-new jets any faster. There just aren’t enough spare parts, training facilities, and everything else that goes with integrating a new platform.

The F-15EX shares 70% of its parts with the current F-15 fleet, meaning the Air Force won’t have to change or add much to bring the Eagle II into the mix.

The Ukraine War has shown that even advanced fourth-generation jets can’t survive the modern battlespace, bristling with modern air defense missiles system, antiaircraft guns, and man-portable missiles. The Eagle II, no matter what its virtues as an all-seeing “missile truck,” will still have to rely on maintaining a safe distance from enemy air defenses. Its job is not to replace but to augment the F-22, F-35, and, someday, whatever fighter comes out of the NGAD program.

But with an expected 40-year lifespan, the Eagle II will likely still be engaging the enemy long after I’m gone.

Nerdy “explainer” articles like this one don’t generate much ad revenue. But they do help keep PJ Media readers much more informed about national defense issues than readers of most other news and opinion sites.

If you’d like to help keep your friends and family informed, you could let them know about the 40% off VIP sale we have going on right now, and the SAVEAMERICA promo code they’ll need.

SCOTUS Did Not Disclose Financial Relationship With ‘Independent’ Expert Hired to Validate Leak Probe
Van Jones Claims Black Police Officers Are Still Motivated By Racism
Vimeo bans “Dead Name” documentary that exposes horrors of transgender mutilation; calls truthful information “hateful conduct”
Teen cowboy dead after bull ride at rodeo: ‘He was loving every second of it’
The part of the Tyre Nichols story that they leave out