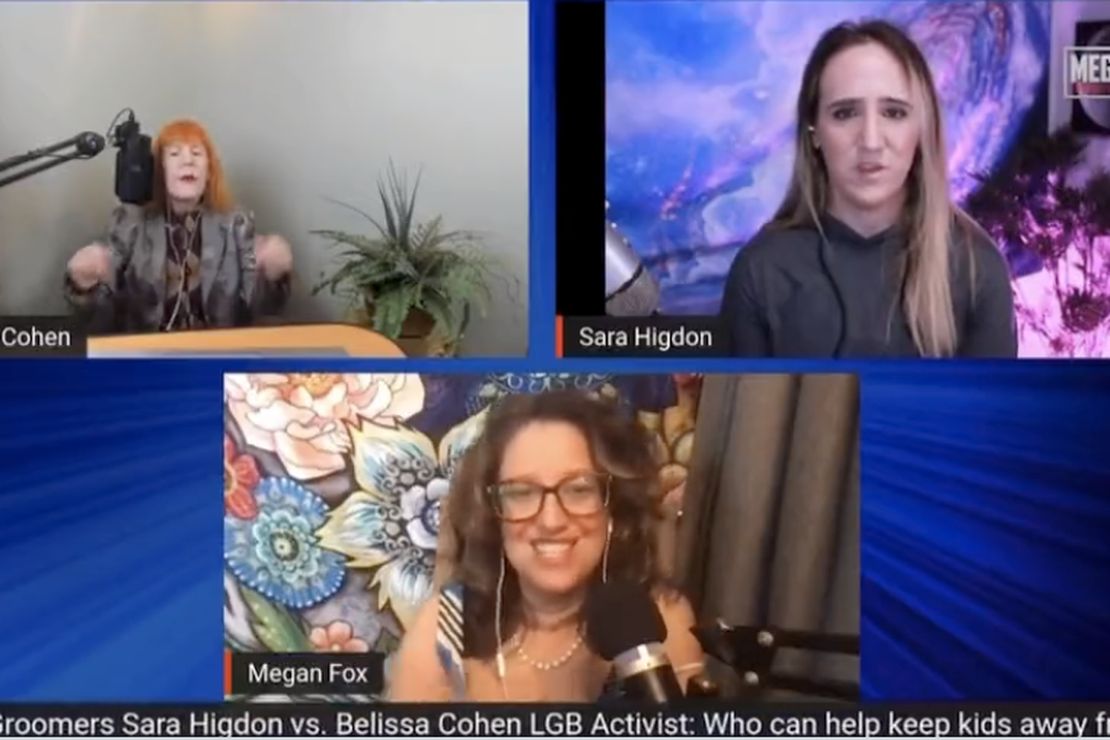 Over the years I have praised the so-called TERFs (trans-exclusionary radical feminists) for being outspoken about women’s sex-based rights. I even wrote somewhere that I would be happy to link arms with them to stop the transing of everything including kids, sports, and women’s bathrooms and spaces. In many ways, I still agree that some of what they do is valuable. But a few days ago, the old leftist mindset reared its ugly head and exposed that it’s been hiding under there waiting to pounce.

It began with a tweet from TERF Belissa Cohen, who is a journalist and an LGB activist. Responding to an event where Sara Higdon, a biological male who does not hide the reality of his biology and does not believe in compelling pronouns or forcing anyone to call him a woman, is speaking on a panel about stopping the sexual grooming of children in schools into harmful gender ideology. Cohen wanted Higdon removed from the event claiming that Higdon’s spot should go to a woman. Higdon is the communications director of a chapter of Gays Against Groomers called Trans Against Groomers. “How is empaneling this man on a panel of women any different than allowing a male 2 compete on a women’s sports team?” Cohen asked. “He’s stealing the platform/speaking opportunity from a woman. DUMP HIM!”

How is empaneling this man on a panel of women any different than allowing a male 2 compete on a woman’s sports team?
He’s taking a spot that would have gone to a woman.
He’s stealing the platform/speaking opportunity from a woman. DUMP HIM! @ethical_care @ChoooCole @CoreyJBrewer https://t.co/oYIHUQszPx

The first problem with this statement is that the event is not a “women’s event,” and it was organized partially by Higdon. “I had done an event with a mutual friend of the organizers, and they wanted to do an event with me. I suggested adding Chloe and Jaimee and connected everyone together,” Higdon told PJ Media. “From there, others were added to round out the panel.” The event, called “Stolen Innocence,” will focus on the damaging gender ideology that is infecting public education. Higdon is an outspoken opponent of such social programming.

The second problem with the shrill demand from Cohen and others like her who took up the call to ban Higdon from the event is that it is anti-free speech. Conservative people should not ever agree with the censors and the silencers and agree to “deplatform” a speaker because someone has their panties in a twist over what might be said or who is saying it. We know that once this train gets going, it doesn’t stop and escalates to [insert any conservative here] being escorted out of a university while the building is on fire because fascists will commit arson to stop ideas they don’t like. That’s not us. We are open to speech, and if we disagree, we offer more speech to combat it. If we aren’t interested in someone’s speech, we should simply choose not to attend the speech. There are zero reasons to ever start campaigning to shut down another citizen’s right to speak freely in America.

I personally disagree with Higdon on some things like the use of public bathrooms. I believe trans people should use bathrooms that correlate with their biological sex or use gender-neutral single-use stalls. But somehow, Higdon and I, while disagreeing on that point, can also agree that trans is a mental disorder and children should not be subjected to any gender theology in school. A person with Higdon’s experience and knowledge on the subject could be helpful to parents going through the trans gauntlet.

I didn’t like the Twitter attacks by Cohen against Higdon that seemed targeted and personal, so I asked both of them to come on my live stream to discuss it like adults. I did not know either of them before this event. What happened was unfortunate. Cohen took the opportunity to argue in favor of banning Higdon from public life and called Higdon a groomer simply for existing and wearing women’s clothes. Meanwhile, Cohen sent me a photo to use of her wearing what looked like a men’s suit with a tie, no less.

Some of the crackpot terfs have been trying to get @SaraHigdon_ canceled from an event she helped organize about protecting kids from gender ideology… just because she’s trans. They debate on hour 3 of @MeganFoxWriter’s YouTube. https://t.co/dd1RM11Zli pic.twitter.com/rVRL04Gm4g

As conservative, freedom-loving people, there is no way we can agree with the TERFs who say that trans people should be banned from everything, ever. Getting down to their main desires, that’s what’s at the bottom. It’s ugly. Cohen suggested that Higdon should not be allowed to speak until he seeks treatment and detransitions. Cohen believes conservatives should be in favor of forcing medical treatment on people who don’t want it or limiting their right to participate in public life. That’s highly unethical, and as we’ve seen with the vaccine debate, dangerous.

Conservatives are supposed to believe in individual liberty. What we should be fighting like hell against is the indoctrination of children into these adult lifestyles. Adults who make adult decisions as adults are perfectly qualified to join us in saying, “Letting kids do this is crazy. Stop.”

Higdon, who admits that gender dysphoria is a mental disorder, also tells people that his life is hard. It’s not glamorous, it’s not very comfortable, and it’s not something to be tried as a fad or sold to children as the answer to their various discomforts. That’s a good message that people need to hear.

Before the gender cultists took control over the narrative, people like Higdon lived among us quietly. I would bet that I shared a bathroom with a man dressed as a woman many times and never noticed. I can only remember noticing twice and that’s because the men in those instances were very clearly men who did not pass and made no attempt to blend in. It was obvious they were there for other purposes than using the restroom.

Now that the self-ID radicals want every man to be able to walk into a women’s bathroom and never be questioned, it has made life very difficult for people like Higdon who were going through life unnoticed. But even after I clearly stated that I am not in favor of biological males in women’s spaces, the rad fems took to Twitter and accused me of being for it. Just like the leftists they are, they are lying to try to cancel my voice in this argument. But I have the receipts. I am and remain opposed to men in female spaces.

Radfems are accusing me of being for men in women’s bathrooms. There is a way to disagree without turning it into a personal attack. As a result of the insane reaction to this show I’m inviting @SaraHigdon_ back next week. Tell me not to do something and you will get MORE OF IT. pic.twitter.com/0yoPojzXpH

The bottom line is this: we need more discussion, not less, if we are going to come to any agreement on how to move forward in this nonsense world. And we need more people, not fewer, fighting with us to stop the insane grooming of kids in schools. Radical feminists are spending their time trying to divide up the alliances we have made in the fight against the left, and we should start asking ourselves why they’re spending their time on that instead of on getting the groomers out of the schools.

Spending any time criticizing allies for using pronouns you wouldn’t use is pointless. I prefer using names, but when speaking, it’s nearly impossible to talk without using pronouns. As long as someone isn’t compelling me to use “preferred pronouns” and if my brain registers a person as “she” I might use it! That’s not the worst thing that ever happened to women.

The worst thing is the death of free speech and the fear that anyone can be canceled and silenced for using their God-given rights to say what they want to say. That’s the monster hiding behind all of this gender ideology and the radical feminist response. Both demand that you will say only what is approved, and that leads to gulags. It makes no difference to me who is demanding that some person or other be “de-platformed” or stopped from participating in public speaking. Whoever is doing that is the enemy.

And spare me the moralizing about the brokenness of some of the allies working alongside us. We are all broken. We are all imperfect, flawed, and struggling. I don’t require moral righteousness (whatever that is) in a fight to beat the radical gay lobby. If I did, there would be no one to fight with, including myself.

For the last time, if you want to tell me what to say and how to say it or who to associate with you can exit stage left immediately.

The full stream s linked below, and the conversation with Cohen and Higdon starts around the third-hour mark.

New GOP governor to deliver Republican speech after Biden’s State of the Union address
Homeless man molested 12-year-old at Georgia park after giving her liquid that made her dizzy, police said
Terrorist On Murderous Rampage Kills 7, Injures Others in Shooting at Jerusalem Synagogue
It’s Beginning to Look a Lot Like World War III
Florida man sues; says sheriff recklessly featured him on ‘Wheel of Fugitive’ spoof video when he was in jail