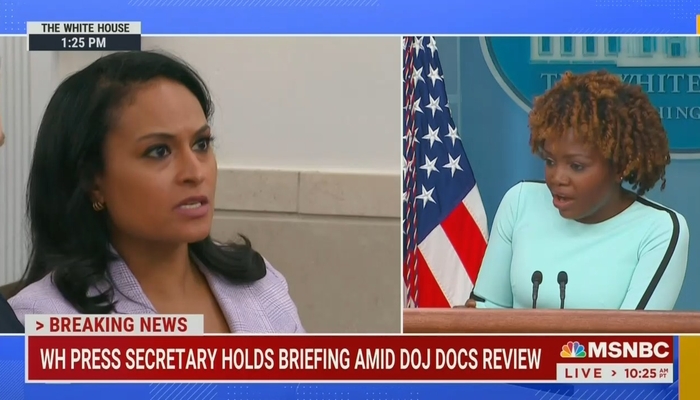 White House Press Secretary Karine Jean-Pierre faced the press corps Friday to close out a week almost no one saw coming with the revelation that the Biden administration had kept hidden for two months that classified documents were found at a (faux) think tank and his Wilmington, Delaware home.

Like we saw on Wednesday and Thursday, some reporters brought the heat on what’s now a special counsel probe created by Attorney General Merrick Garland. On Friday, however, there were some embarrassing queries.

Reuters’s Andrea Shalal had one of the embarrassing takes, lobbing this lament to senior adviser and former Atlanta Mayor Keisha Lance Bottoms (D):

Can I ask you if — as you’re — in your role in community outreach, whether the issue of the documents is a particular setback for the President at a moment when other things seem to be going pretty well? Inflation is coming down. Employment is solid. Like, are you finding that you’re getting a lot of response from the public on that? And how do you — how do you play that issue?

While clearly coached to duck documents questions, Bottoms seemed confused: “In my role as senior advisor for public engagement, we’ve not gotten any information on that in terms of from the public. We’ve not received any questions.”

Fast-forward to Jean-Pierre’s portion and, after trying to explain away Biden’s problems on Good Morning America, ABC’s Mary Bruce had what seemed like a basic question but, based on Jean-Pierre’s response, came off like a hardball: “[I]s it ever okay for classified documents to be mixed with personal effects?”

Jean-Pierre embarrassingly replied that what she “can say is what the President has said before,” which is that “[w]e take this very seriously.”

While he didn’t have a tense exchange this time, CBS’s Ed O’Keefe’s questions about the debt limit drew a terse reply that had to have been triggered by their exchanges earlier in the week (click “expand”):

JEAN-PIERRE: And just to be very clear here, Ed, we have — I’ve been in here almost every day since we got back from Mexico City, standing here, taking your questions at length. So, we’re not avoiding anything here and you’ve heard —

JEAN-PIERRE: — you’ve heard — you’ve heard from the President at least twice and you — we have put forth multiple statements from the White House Counsel’s Office. So, that suggestion, I just disagree with.

NBC’s Kristen Welker had one of those tense exchanges. After basic questions about Biden’s participation with Special Counsel Robert Hur’s requests, Welker zoomed out: “Does the White House, broadly speaking, have an obligation to share not just with the National Archives, but with the American people when the existence of classified information is found in a private location?”

When Jean-Pierre tried to say “there is a process in this,” Welker tried again: “[I]s it the policy of the White House that they should share that information not just with the National Archives, but with the American people?”

Jean-Pierre had a cartoonish reply that stated in part: “We have been transparent in the last couple of days in — remember there’s an ongoing process, and we have spoken when it is appropriate…[T]he actions that we took were right — right actions”.

Welker noted Jean-Pierre has only “answered question when the press has broken in the news,” but Jean-Pierre demurred on keeping this scandal from the country because “it’s an ongoing process.”

Welker made one last attempt and threw back to her comments on an NBC News Special Report Thursday after Garland announced the special counsel:

In response, Jean-Pierre claimed Biden has already done so in having “restored independence in the Department of Justice.”

The questions of the briefing came from CBS News Radio’s Steven Portnoy, who first had this hardball about how her use of the word “process” comes off “like a strategy” the could be “to protect” Biden. For his other question, he asked Jean-Pierre whether she was part of any operation to keep the news from the public until Monday when CBS came calling (click “expand”):

PORTNOY: You describe a process, but it sort of feels like a strategy — a communication strategy to protect the President from political damage. Was it the hope and expectation here that this would have remained a private matter and not have been subject to public disclosure?

JEAN-PIERRE: Look, Steven, that’s your version of the case. I’ve been very clear here, and I’ve answered that question multiple times in different versions — right — in the last couple of days. Look, I want to be very clear: There is a process here; we are going to respect the process. This is all part of the Department Jus — the Department of Justice process and we are cooperating fully. We are cooperating fully in this process and, again, the President believes that the Justice Department and its independence needs — needed to be restored. That’s what you have seen under this administration the last two year — two years and I want to be consistent in what I’m saying. I want to be prudent in what I’m saying when I say that we are going to defer any questions related to this to the Department of Justice and any other items that you have, if you don’t want to talk to the Department of Justice, you’re free to talk to the White House Counsel Office; I know you guys have been in touch with my colleagues there.

PORTNOY: We have done both. But let me just ask you, because oftentimes in the careers of White House Press Secretaries, there becomes — there comes a time where they are asked, you know, what they knew and when they knew it. Were you or any member of your staff involved in the crafting of the strategy as to when this disclosure should be made in advance of CBS News breaking the story on Monday evening?

Going back to the eye-roller category, Voice of America’s Patsy Widakuswara claimed there’s “online propaganda from adversaries seeking to take advantage of the revelation of the classified documents” before asking “whether the administration” will be “doing anything to deter those threats.”

ABC’s Karen Travers closed the briefing with a solid question about whether anyone from the White House counsel’s team would come to the Briefing Room (which Jean-Pierre refused to look into) and a question in the vein of Shalal: “And is the White House concerned that this investigation is going to overshadow what you are trying to do right now, what your message is right now?”

This allowed Jean-Pierre to finish with a stump speech that the American people are focused on hearing “how this President, how this administration, how the federal government is delivering for them.”