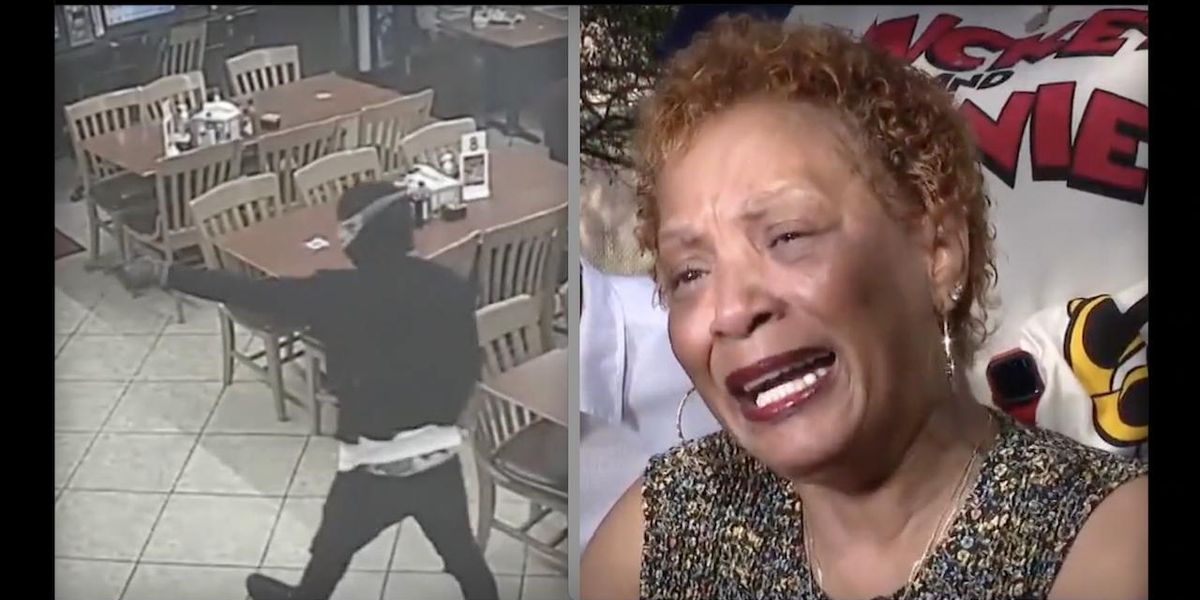 The mother of a Houston restaurant robber who was fatally shot by a customer earlier this month said the customer who pulled the trigger multiple times “abused” her son in that moment, KRIV-TV reported.

“I don’t hate him. I can’t hate him,” Corine Goodman told the station in reference to the unnamed customer in a recent interview. “But I want to know why didn’t you stop? If you had to kill him, I can deal with that. I can come to grips with that. He did something wrong. I understand that. But for him to be shot four times in the back leaving, and when he falls down, he shoots him four more times? You abused him. He was dead already. And that hurt. That hurts.”

Houston police told KHOU-TV in the station’s original story that an armed man in a mask entered Ranchito Taqueria on South Gessner near Bellaire Boulevard just before 11:30 p.m. Jan. 5 and demanded money and wallets from customers.

One of the customers drew a gun and fired at the robber, who was walking past him:

KHOU said in its broadcast that it froze the surveillance video before shots were fired but that the full video shows the robber being shot multiple times. KPRC-TV in its video report said nine shots were fired.

Police told KPRC that the customer who shot the robber retrieved the stolen money from the robber’s pocket and returned the money to other patrons. In fact, KPRC said the customer could be heard on surveillance video saying, “Come get your money.”

Finally, the customer walked to the door, dumped a beverage on the robber lying on the floor, and walked out, KPRC said.

Those inside the restaurant departed before police arrived, KHOU said, adding that there were no reported injuries among customers or restaurant staff.

Houston homicide investigators later questioned the restaurant customer who fatally shot the robber. While the customer wasn’t arrested, charged, or named, a grand jury will review the case to determine whether charges against him are warranted.

What do we know about the robber?

The robber in this case has been identified as 30-year-old Eric Eugene Washington, KHOU said, adding that court records indicate this wasn’t his first robbery.

More from the station:

In 2013, he and others were charged with capital murder after a man was killed during an armed robbery, according to prosecutors. The charge was later changed to aggravated robbery with a deadly weapon and Washington was convicted and sentenced to 15 years in prison.

It’s unclear exactly when he was released, but the most recent time he was arrested was Dec. 16 when authorities said he pushed his girlfriend to the ground and scratched her. Washington was charged with misdemeanor family violence and was released on a personal recognizance bond.

“What he did, I don’t condone. He knew better. He never said anything that made me think he would go this route,” Goodman added to KRIV in regard to her son robbing restaurant customers. “He started working. He was striving because he said, ‘Mom, when you send someone to penitentiary, it breaks you.'”

In fact, Goodman added to the station that hours before the robbery, her son promised her that he’d do better: “Thursday morning was the last time he called me. He said, ‘Mom, son to mother, I’m trying to be the best person I can be.'”

She also told KRIV that Washington welcomed a newborn son four months ago — and that while she knew he was struggling financially, Goodman never realized her son was that desperate for help.

“He’s not the monster that people picture him to be,” Goodman added to the station.

Criminal defense attorney Juan Guerra Jr. is representing the customer who fatally shot Washington, and Guerra released a statement Monday, according to KRIV:

“My Client who wishes to remain anonymous was dining with a friend at El Ranchito Taqueria, and as it has been seen on video, a robbery suspect entered the restaurant, pointed a weapon at my client and the other customers demanding money. In fear of his life and his friend’s life, my client acted to protect everyone in the restaurant. In Texas, a shooting is justified in self-defense, defense of others, and in defense of property. The customer has met with the Harris County District Attorney’s Office and Investigators with HPD homicide. He fully intends to continue cooperating with the ongoing investigation. When the investigation is complete, this case will be presented to a Grand Jury. We are confident that a Grand Jury will conclude that the shooting was justified under Texas Law. This event has been very traumatic; taking a human life is something he does not take lightly and will burden him for the rest of his life. For that reason, he wishes to remain anonymous. Due to the overwhelming coverage, we ask the media and the public to respect his privacy.”

Wall Street Journal blasts Big Pharma, Biden regime for “deceptive” covid booster shot campaign
JK Rowling shuts down trans activist with perfect two-word response that goes mega-viral
Man Rapes Two Women, ‘Transitions,’ Then Is Sent To Women’s Prison
Fox News political analyst says he was kicked out of restaurant for being a conservative
Tech tycoon, 45, reportedly spends $2 million a year on his extreme anti-aging regimen. His goal? To achieve the body, inside and out, of an 18-year-old.