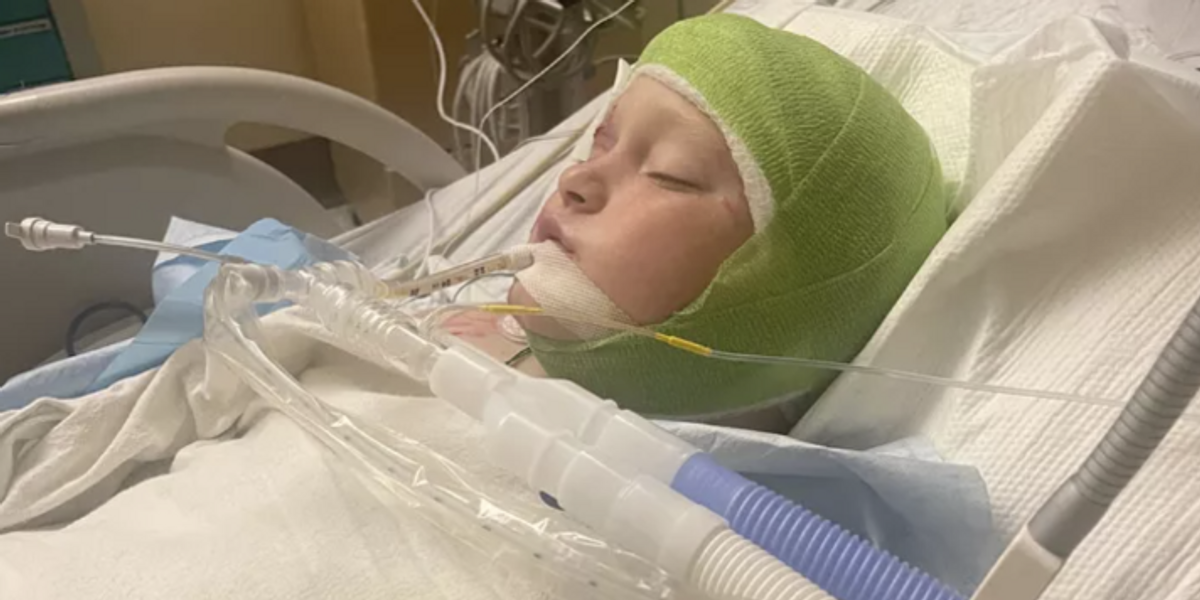 An 11-year-old Georgia boy was the victim of a ferocious pit bull attack. The owner of the dangerous dogs was arrested.

Justin Gilstrap was riding his bicycle through the neighborhood on Friday when he was suddenly attacked by three loose pit bulls. The 11-year-old boy was ripped off his bike by the dogs and dragged into a ditch on the side of the road.

Ericka Gilstrap, Justin’s mother, told the Augusta Chronicle, “By the time he got to him, he could see the dogs, and that’s when he called 911. Justin was alone when it happened, and that’s what is so heartbreaking to me.”

Ericka said her mother noted that there was “just blood everywhere.”

The 11-year-old boy had one of his ears ripped off and 80% of his scalp was torn off from the pit bull attack. Justin required staples on the bottom of his feet because he was kicking the dogs in an attempt to fend off the pit bull pack. The bone on his leg was exposed after being mauled.

Ericka said, “As a mom, I don’t even know where to touch him. When he wants a hug, I’ve got little places on his face I’ll kiss, but I don’t want to hurt him. There’s one spot right over his heart that doesn’t have any bruises or marks, so I put my hand there and rub when he starts waking up, and he just goes right back to sleep.”

Justin has been sedated in the hospital because of the excruciating wounds. He is being treated as if the dogs have rabies as a precaution.

The heartbroken mother hopes her son won’t have PTSD from the traumatic experience.

Burt Baker III, the owner of the pit bulls, has been arrested. Baker was charged with reckless conduct. He is out on bond.

Ericka claimed that Baker’s pit bulls are “always free” roaming the neighborhood, and have ventured into her family’s yard. She said that Baker’s property does not have a fence to contain the three pit bulls. Gilstrap said the pit bulls attacked her sister’s Yorkshire terrier earlier this month.

Animal services confirmed that the owner turned seven dogs over to the county following the attack. The animals will be quarantined for 10 days.

A Columbia County official said, “The fate of the dogs will be determined as the investigation moves forward.”

A GoFundMe campaign was launched to help pay for Justin’s medical expenses. At the time of publication, the crowdfunding campaign raised more than $200,000 of its goal of $250,000.

Earlier this month, a 7-year-old Louisiana girl was mauled to death by a neighbor’s pit bull.

In October, two small children in Tennessee were mauled to death by the family’s two pit bulls. The mother of the children was also attacked by the pit bulls. She survived the dog attack, but needed medical attention at a local hospital.