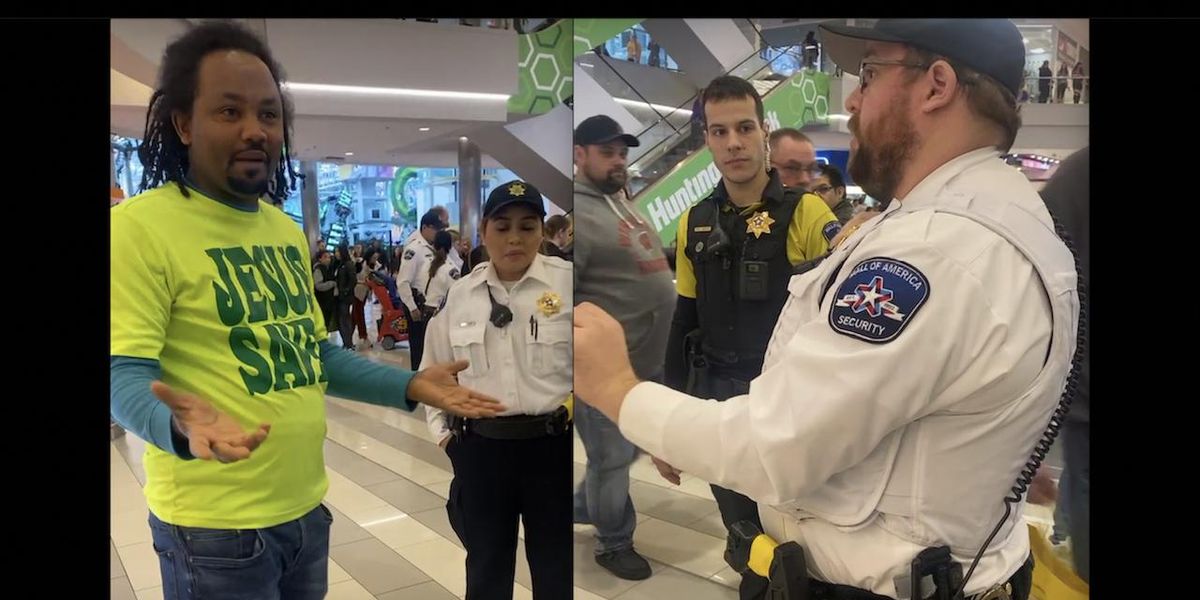 Cellphone video captured a confrontation involving a Mall of America security guard telling a man wearing a “Jesus Saves” T-shirt that his shirt is “offending” shoppers at the famously large mall in Bloomington, Minnesota — and the guard ordered the man to remove the shirt or leave the mall.

The outlet linked to a pair of clips showing the man talking with security guards near the mall’s rotunda, and Alpha News added that one of the videos was livestreamed Jan. 7 to Facebook.

The back of man’s shirt reads “Jesus is the only way” and includes the well-known “coexist” symbol crossed out, the outlet said.

“Jesus is associated with religion, and it’s offending people,” a security guard tells the man in one clip, adding that “people have been offended.”

The guard then tells the man to remove his shirt or leave the mall.

The guard adds, “Again … I’m giving you a couple options: take the shirt off, and you can go to Macy’s, and you can do your shopping — or you can leave the mall, OK? Those are your only options right now.”

A second cut in the same clip shows the guard getting angry as he sharply tells the man, “If you want to shop here, you need to take that shirt off!”

The man asks what’s wrong with the shirt, and the guard replies — with his voice still raised — that “it is religious soliciting; there is no soliciting allowed on mall property, which is private property!”

The guard adds, “We’ve had guests come up saying that they’ve been offended by your shirt … take the shirt off, and you can go shopping!”

u201cI automatically assumed this was overseas, but it’s right here in America.u201d

Here’s another clip that ends with the man in the “Jesus saves” shirt giving a fist bump to different guard, and the man in the shirt and the guards part ways. It isn’t clear if the man left the mall or not:

Alpha News said the mall prohibits “inappropriate attire,” including apparel that “has obscene language, obscene gestures or racial/religious/ethnic slurs that are likely to create a disturbance.” The outlet added that the mall also disallows “picketing, demonstrating, soliciting, protesting, or petitioning.”

Alpha News also reported that some online commenters suggested the man eventually was allowed to remain in the mall with his shirt on, but the outlet added that Mall of America wouldn’t provide Alpha News with any context or explanation in regard to the incident. In fact, the outlet said the mall didn’t respond to several calls and emails seeking comment this past week.

As it happens, the outlet added that the Mall of America hosted and promoted a drag show for “all ages” about a year ago year in its “iconic rotunda.”