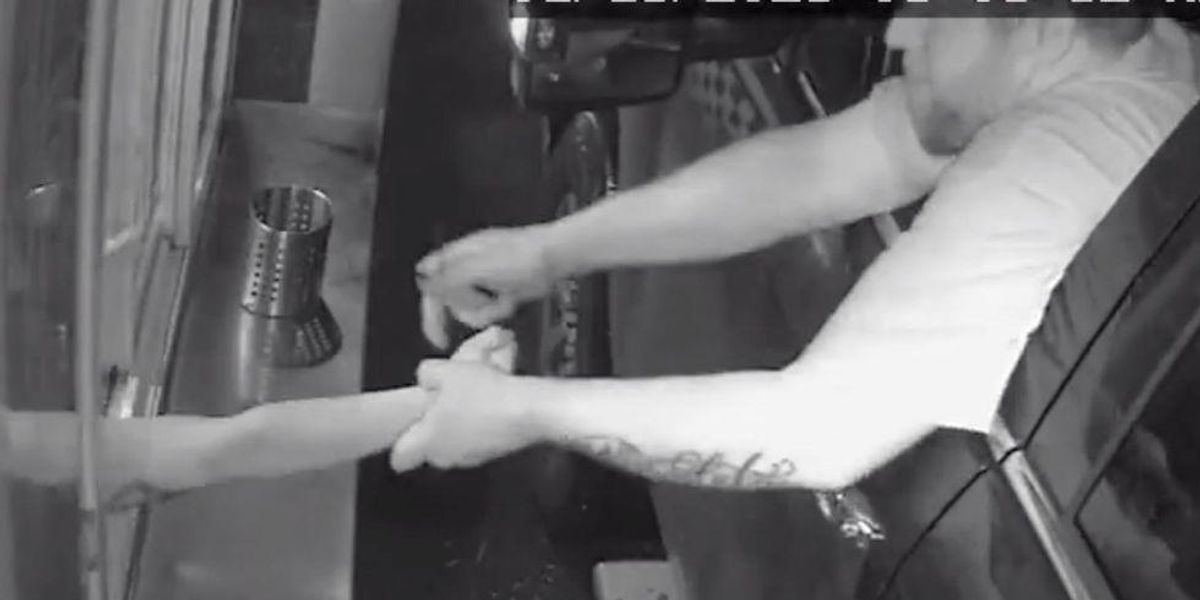 A shocking video captured the moment a man tried to grab at a barista with a zip tie device in an apparent kidnapping attempt.

The startling incident unfolded at a coffee stand in Auburn, Washington, at about 5:06 a.m. on Monday.

The surveillance video shows a man pull up in a dark colored SUV. When the female barista tried to hand him money, he abruptly grabbed her arm and lashed some device at her with his other hand.

Police said it was a “looped zip tie device” likely meant to bind the woman’s hands.

The barista was able to fight him off, and he drove away while dropping cash on the ground.

“They are in vulnerable positions because they’re usually controlling those spots by themselves at early hours in the morning when it’s dark outside. But this barista did an awesome job of protecting herself and fighting this person off,” said Auburn Police Department spokesperson Kolby Crossley.

Police asked the public to identify the man on the video based on his distinctive tattoo that appeared to read “Chevrolet.”

u201cThe Auburn Police Department is asking for any information to help identify a suspect that attempted to abduct a barista during the early morning hours of 1/16/2023.u201d

On Tuesday, the department tweeted that it had arrested a suspect with the help of “overwhelming support” from the community.

The suspect was to be arrested and charged with attempted kidnapping and possibly other charges as well.

The alleged victim spoke to Nexstar and said that she believed the man was intent on kidnapping someone from the shop but not necessarily anyone in particular.

“He was going to do it to someone that day and it happened to be me,” she said.

The owner of the coffee stand spoke to KCPQ-TV and said she was afraid that her baristas are being targeted and didn’t want the name of the stand reported in the media. She also said she had owned the shop for 25 years and had never experienced anything like the incident.

Here’s a news video of the shocking event:

Zumba class violently disrupted when bullets pierce studio window, injuring woman
It Looks Like Biden Is ‘Wagging the Dog’ With Ukraine to Distract From Garage-gate
Are We Talking Our Way Into a Debt Ceiling Catastrophe?
MSNBC’s Hayes: Biden Economic Recovery Most Remarkable in U.S. History
Ex-Prisoner ‘Shaking With Fear’ Over Transgender Females In Women’s Prison