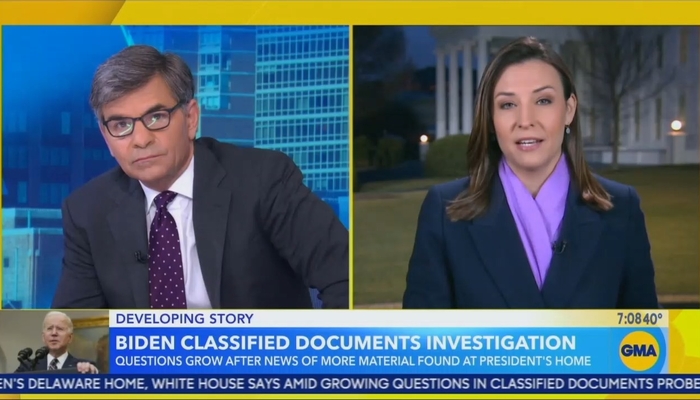 ABC’s Good Morning America fought a surprisingly lonely battle Tuesday in carrying water for President Biden and the White House amid their classified documents scandal, repeatedly touting the administration as “firing back” at Republicans wanting to learn more and making requests of the regime because…Donald Trump.

“President Biden keeping quiet about the classified document investigation after more pages were found at his Delaware home last week as the White House fires back at House Republicans as they ramp up their investigations, accusing them of playing politics,” said co-host Michael Strahan in a tease.

Senior White House correspondent Mary Bruce had the story, stating that while “the pressure on President Biden is only growing,” his team was “firing back accusing Republicans on the Hill of hypocrisy.”

Noting that Biden “isn’t talking” publicly about this, Bruce added that, despite there being a special counsel, “Republicans in Congress have launched two investigations of their own.”

In turn, Bruce boasted, “the White House this morning is firing back at Republicans’ demands, noting they’ve shown little interest in investigating Donald Trump’s refusal to turn in over a hundred pages of classified documents stored at Mar-a-Lago, saying, ‘House Republicans are playing politics in a shamelessly hypocritical attempt to attack President Biden.’”

She added that in contrast to Trump having “refused to turn them over for a year…Biden’s lawyers say they are cooperating fully”.

Bruce also hid behind former Homeland Security official John Cohen’s explanation for why Americans won’t receive transparency: “Typically when a security investigation is being conducted, the details of that investigation are not disclosed. This is to protect national security.”

She then closed by saying “critics” have claimed “this approach…raises real questions about transparency”.

CBS Mornings and NBC’s Today kept up the heat. CBS Saturday Morning co-host Michelle Miller exclaimed in the Eye Opener that “[p]ressure builds on President Biden over the scandal involving documents marked classified” with “questions from members of both parties.”

Former CIA official and CBS News contributor Mike Morrell said in a soundbite that “[s]omebody needs to be put in charge of knowing what information has gone to the residence and making sure that [classified] information comes back” after having long given leaders “slack because of who they are,” but he sang a slightly different tune regarding Trump’s documents.

Nonetheless, Diaz had helpful information about levels of classification and the Presidential Records Act (click “expand”):

DIAZ: There are three broad classification levels: confidential, secret, and top secret. depending on the risk, the intelligence, if it gets out, poses to national security. The levels are indicated on cover pages like these from the Mar-a-Lago seizure and on the top and bottom of each page as shown in this mockup. And there’s a wide range of what can be considered classified.

DIAZ: Under the Presidential Records Act, what is supposed to happen at the end of the administration is all government documents belonging to a president or vice president, whether they’re classified or not, are supposed to go to the National Archives.

And on NBC, co-host Hoda Kotb teased: “Turning up the heat. The growing firestorm over those classified files discovered at President Biden’s Delaware home. Lawmakers on both sides of the aisle demanding answers.”

For her part, Welker described “[t]he calls for answers and information” as “growing louder this morning with Republicans demanding to see the visitor logs from President Biden’s Delaware home…with key questions lingering, including why it took the White House months to reveal the recovered records.”

Reiterating the “mounting” “pressure” for the White House to come clean, Welker did more to elaborate on how the Secret Service allegedly keeps track of who comes in and out of Biden’s Wilmington, Delaware home (where classified documents were found) and why it would still be insufficient as a visitor’s log (click “expand”):

[T]he chairman of the House Oversight Committee asked the White House for visitor logs of his residence, citing national security concerns. The White House and the Secret Service say they do not maintain visitor logs for the President’s home because it’s a private residence. A spokesman for the White House counsel’s office saying in a statement, “Like every President across decades of modern history, his personal residence is personal.” A Secret Service spokesperson saying the agency does perform background checks on visitors who come into contact with the Bidens at both of their Delaware homes, but that those documents are only kept for a limited time. But Republicans still demanding more answers.

What’s not yet clear? The total number of classified records recovered. Now, three sources familiar with the matter tell NBC News President Biden is frustrated with the backlash and with his administration’s response, which has left key questions unanswered.

And in a second-hour news brief, Guthrie reiterated that “[s]ome Democrats are joining Republicans asking President Biden how classified documents…ended up in his home, his garage, and a private office”.

ABC’s latest attempt to rescue the Biden team was brought to you by advertisers such as BMW and Colgate. Follow the links to see their contact information at the MRC’s Conservatives Fight Back page.

To see the relevant transcripts from January 17, click here (for ABC), here (for CBS), and here (for NBC).

Convicted Child Sex Offender Given Custody of Little Girl – Then Gets Her Pregnant
Mom chases off attempted carjacker who nearly drives away with her child in vehicle: Video
DACA Was Always Unconstitutional
CRIMINAL: JJ tried to create a new subsidiary to take all the liability from talc powder damage lawsuits, then declare bankruptcy to dismiss BILLIONS of dollars in trial awards
Speaker McCarthy Schools CBS’s Brennan Over Dem Election Denial Hypocrisy