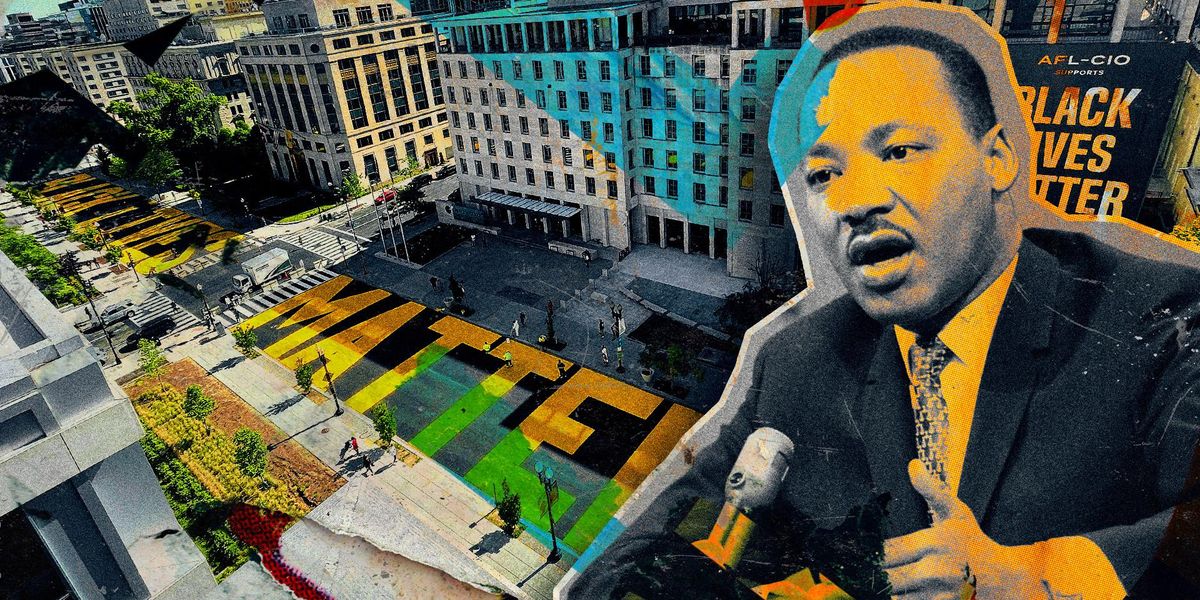 One of the enduring legacies of Dr. Martin Luther King Jr. is the “white flight” of a black leadership class that is more concerned with changing hearts and minds in Silicon Valley than in Compton.

King’s imitators are in bed with white knights in politics, big tech, big business, and corporate media. The NAACP’s “I take responsibility” campaign was a clear example of how easy it is for a civil rights organization to become more concerned with getting white liberals to repent of their sins than improving the conditions of black communities.

A similar dynamic exists for elected officials. The mayor of Washington, D.C., had the words “BLACK LIVES MATTER” painted in the middle of the street leading up to the White House. Trolling Donald Trump did nothing to preserve black life in a city where the vast majority of homicide victims are young black men.

BLM signs and flags were displayed prominently in yards and store windows so that white liberals could escape accusations of racism.

But one simple fact remains: No amount of white guilt, shame, or extortion will improve the overall condition of the black community. Black leaders who see themselves continuing the work of Dr. King but refuse to ask anything of black people are doing the entire country a disservice.

You can’t lead people if you have no expectations for them. You can’t claim to love a person if you have no standards for them. Every single demand the black leadership class articulates in public points in one of two directions — bigger government or better white people. That’s because black leaders see the two main issues facing black America as income inequality and systemic racism.

This worldview, shared by some of the most politically active black pastors, explains why men who should be advocating for the sanctity of life end up sounding like paid spokesmen for Planned Parenthood. They have no issue telling white people what words to say, where to spend their money, where they should send their kids to school, or what books to read. The incentive structure explains it all. Publicly rebuking rap icons at the BET Awards will cost a black journalist significant cultural capital, but publicly rebuking “latte liberals” can turn into a potential payday.

The black and South Asian women who started Race 2 Dinner understand this dynamic. They charge white women money to come to their homes and berate them for their racial blindness and contributions to upholding “systemic racism.”

King’s appeals to the collective consciences of white Americans in the 1960s made sense. Images of civil rights protesters being beaten by the police or the high-profile murder of Emmett Till required a national response. It is hard for people who have only seen a “Whites Only” sign in a museum to understand the social, legal, and psychological impact of ascribing second-class citizenship to a group based on immutable characteristics. King needed to win the hearts and minds of a white majority in this country for the laws to change.

Unfortunately, the black leadership class turned a tactic into an identity.

Instead of periodically surveying the social landscape and adjusting their leadership priorities based on the current circumstances, the people who see themselves as King’s activist heirs have abandoned their leadership responsibilities altogether. They have destroyed one of the fundamental principles of leadership: You can’t influence people you aren’t willing to engage, encourage, coach, mentor, disciple, or criticize.

Dr. King also differs from today’s activists because of his willingness to apply the same moral standards and loving critiques to African-Americans as to white people. He said the following in a 1957 speech in Birmingham:

Members of the Afristocracy today would say this type of rhetoric promotes “respectability politics.” They would rather tell white voters in Wisconsin to advocate for a federal “assault weapons” ban than tell young black men in Chicago to stop using handguns to kill each other in broad daylight.

Like Ben Crump, the prominent civil rights attorney, they would rather take to Twitter to announce the state of Minnesota was phasing out the use of the term “master bedroom” in its real estate listings. The fact he felt this was a noteworthy win for racial justice was a sign he needs to have his leadership compass recalibrated.

If silence truly is violence, then the Afristocracy should be brought up on felony abuse and neglect charges. There is no reason African-American politicians and pundits should spend more time promoting the concept of white fragility than strategies to strengthen the black family.

Part of what it means to be a good leader is the willingness to speak the truth in love, especially when the intended audience is resistant to the message. Dr. King did that by challenging the nation to have its creeds match its deeds. His imitators demonstrate their affections lie with the white liberals seeking absolution for the sins of their forefathers rather than the black people they claim to represent.