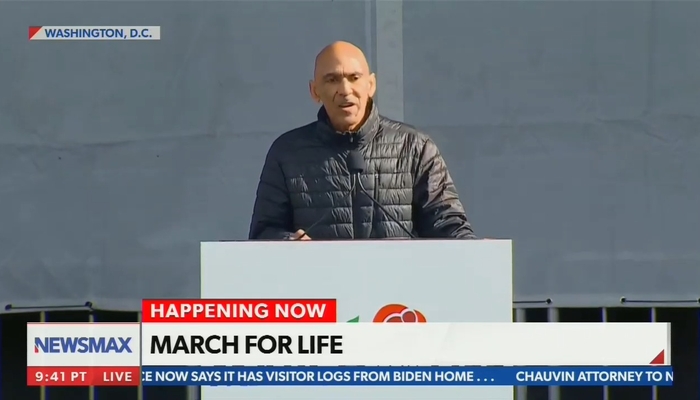 Once upon a time there was free speech in America.

Once upon a time, sports was about…..sports.

Let’s start with Tony Dungy. Dungy is, legendarily in the sports world, the one-time coach of the Tampa Bay Buccaneers and Indianapolis Colts. In defeating the Chicago Bears in Super Bowl XLI, Dungy became the first African-American head coach to coach his team to a Super Bowl victory. Inducted into the Pro Football Hall of Fame, he appears as a commentator on NBC’s Football Night in America.

The other day, Coach Dungy let it be known that he would be attending this past week’s 50th March for Life in Washington. This, of course, is the annual pro-life march protesting the Supreme Court’s Roe v. Wade abortion decision that legalized abortion in 1973. That decision was memorably overturned last year with Dobbs v. Jackson sending the issue back to the states. This in turn made the 50th March something of a celebration as seen on various conservative media.

But, of course, Dungy’s decision was just too much for various lefties in the media. Smelling salts were doubtless in order. Dungy is also well on record for opposing same-sex marriage. Here’s the headline from the far, far left The Nation: Tony Dungy Is a Right-Wing Zealot and the NFL and NBC Don’t Care.

Written by one Dave Zirin, the magazine’s “sports editor”, the article starts off by describing the March for Life this way:

I’ve covered the March for Life in Washington, D.C., for years. It is a madhouse of right-wing gadflies, disinformation addicts, Qanon adherents, and, most disturbingly, class after class of teenage and tween-age children dragged there by teachers who abuse their authority in ways that would make Ron DeSantis smirk. (He only outlaws the speech of some teachers.)

Then he starts in on Dungy, quickly zeroing in on the NFL and its broadcast partners, saying that by their allowing Dungy on the air -where he talks football, not politics – “is a staggering indictment of the politics the NFL and the network’s partners allow and the kind that they condemn.”

…This side of Dungy, which he has exhibited publicly for years, confuses some fans. After all, this is the same Dungy who was a widely admired trailblazer as the first Black coach to win an NFL title.

If Dungy wants a show on The Daily Wire, more power to him. But his being center stage on the most watched program in the country makes NBC and the NFL complicit in his disinformation and political posturing. Like Dungy, neither NBC nor the NFL has commented about his latest eruption. But their silence speaks volumes. It’s a silence that’s almost as loud as Dungy’s hateful blather, almost as loud as the thousands of people descending upon Washington—some mandatorily—to celebrate a fascistic, discredited Supreme Court and the loss of our rights. It’s shameful. And we should not be afraid to say so.”

Well. Message received. If you are a black man, you are expected to be Left. But Dungy has had the temerity to walk off the liberal plantation and think for himself – and he should be fired post-haste.

Where have we heard this bigoted line of thought before? Oh yes. Recall this 2020 headline at CNN: Biden: ‘If you have a problem figuring out whether you’re for me or Trump, then you ain’t black’

Which is to say, if you’re black and don’t think the way white liberals demand, then “you ain’t black.”

In the case of Tony Dungy, this kind of woke bigotry is being used to demand that he be fired.

Now move to Philadelphia, a city in my home state of Pennsylvania that is famously fond of hockey, specifically its National Hockey League Philadelphia Flyers. Here’s the NewsBusters headline from my colleague Tim Graham: NHL Hockey Commentators Get Out Brass Knuckles on Gay ‘Pride’

On January 17, Philadelphia Flyers defenseman Ivan Provorov infuriated sports journalists when he refused to wear a rainbow jersey for warm-ups during ‘Pride Night,’ citing his Russian Orthodox faith. ‘I respect everybody and I respect everybody’s choices. My choice is to stay true to myself and my religion.’

On the NHL Network, analyst E. J. Hradek trashed Provorov, who moved from Russia to Pennsylvania when he was 13, saying he should go back to Russia and fight in Ukraine. “Ivan Provorov can get on a plane any day he wants and go back to a place where he feels more comfortable, take less money and get on with his life that way if it’s that problematic for him,” he said. ‘If it bothers you that much, there’s always a chance to leave, go back to where you feel more comfortable — I understand there’s a conflict of sorts going on over there, maybe get involved.’

Got that? Hockey star (and Russian) Ivan Provorov had the nerve – the nerve!- to stand up for his religious beliefs, making it plain that “I respect everybody and I respect everybody’s choices. My choice is to stay true to myself and my religion.”

And with that the NHL Network’s analyst E. J. Hradek freaks out.

To his credit, Flyers coach John Tortorella stood up for his star player, saying:

“As I said, Provy did nothing wrong,” Tortorella said Thursday, according to the Philadelphia Inquirer. “Just because you don’t agree with his decision doesn’t mean he did anything wrong.”

Notably, there was also this from Fox News: Ivan Provorov jerseys selling out online after media condemned him for not wearing Pride-themed jersey

Imagine that. Hockey fans who rebel against being forced to be woke.

One can only wonder what Hradek would say if Provorov were a Muslim, and said he wouldn’t wear the “gay pride” jersey because it would violate his Islamic faith. One suspects the cat would suddenly have Hradek’s tongue.

Taken together, the episodes with Tony Dungy and Ivan Provorov illustrate exactly how intolerant and bigoted some in sports media can be. The Dungy and Provorov critics are not really about football or hockey. They are about being woke. And if you have the nerve to break away from the woke leftist heard and be yourself – they will target you for firing.