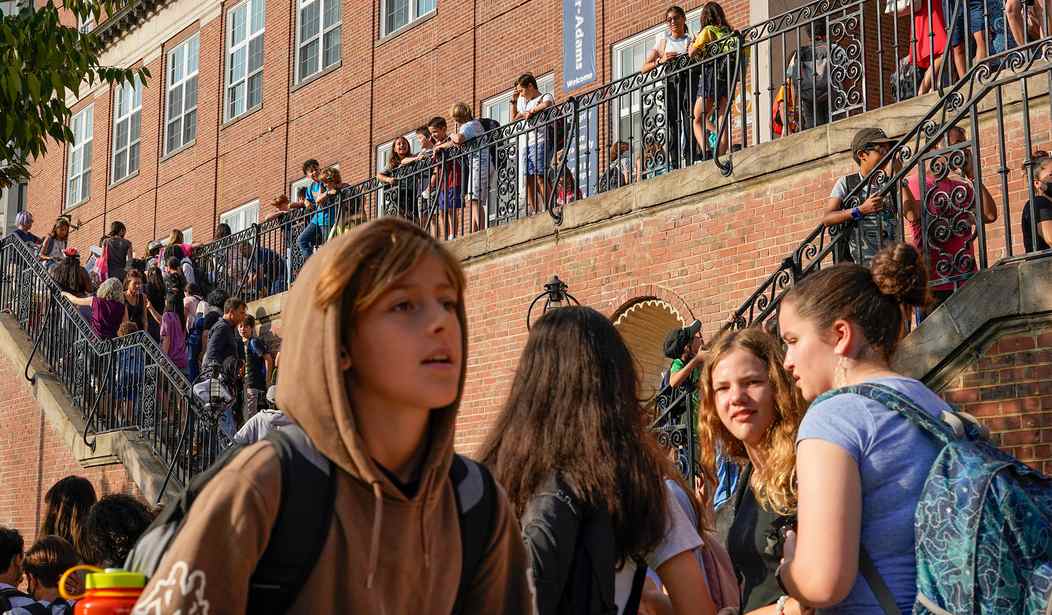 It’s a terrifying time to be a parent with young kids. There’s really nowhere you can feel comfortable that your kids are safe. At home, if you’re not policing everything your kids are watching, reading, or listening to, they’re probably being exposed to content that is brainwashing them and undermining your authority as their parent. Even your subscription to Disney’s streaming service Disney+ is full of questionable content that you might not be comfortable having your kids watch.

Schools are no better. We’ve long known that schools are full of left-wing educators and administrators, but it seemed that until recently, you could count on elementary and middle schools to stick to the basics of reading, writing, and arithmetic. Now, we hear stories all the time about how young kids are being taught critical racial theory (CRT) and social-emotional learning (SEL) or are being groomed into the transgender cult.

These days, if you want to find out what your kids are being taught, you’ll be met with an incredible amount of resistance. If you speak out at a school board meeting, you could be branded a domestic terrorist by the Biden administration. And, perhaps worst of all, if your child is groomed into the transgender cult at school, the school will actively keep this secret from you.

We’ve reported on this happening in schools nationwide. This isn’t a few random stories involving rogue teachers or administrators, either; it’s happening as a matter of policy in some of the largest school districts in the country. And the New York Times covered it over the weekend — and failed to recognize the seriousness of the issue.

Related: Patriot Barbie vs. the Trans School Board Member

The Times story profiled a California mother named Jessica Bradshaw who discovered that her 15-year-old daughter had socially transitioned at her high school, and that the school had kept this information from her. She only found out when she discovered “an unfamiliar (male) name” written on one of her homework assignments. The mother asked the school why she wasn’t informed. She was told that according to California law, unless a student gives them permission to, the school is not required to inform parents about his or her social transition.

“There was never any word from anyone to let us know that on paper, and in the classroom, our daughter was our son,” Bradshaw told the paper.

The New York Times didn’t seem to think this was a big deal and said the dispute between the Bradshaws and the school “illustrates how school districts, which have long been a battleground in cultural conflicts over gender and sexuality, are now facing wrenching new tensions over how to accommodate transgender children.”

According to the story, the Bradshaws were eventually accepting of their daughter’s “new gender identity” but were nevertheless disturbed at the lack of communication from the school. The story also offered some major red flags as to the girl’s psychological state.

The Bradshaws accepted their teenager’s new gender identity, but not without trepidation, especially after [she] asked for hormones and surgery to remove [her] breasts. Doctors had previously diagnosed [her] as being on the autism spectrum, as well as with attention deficit hyperactivity disorder, PTSD and anxiety. [She] had struggled with loneliness during the pandemic, and, to [her] parents, seemed not to know exactly who [she] was yet, because [she] had repeatedly changed [her] name and sexual orientation.

Yeah… it sounds like this girl needs therapy, not having her breasts cut off. She’s certainly in no position to make an informed, objective decision to undergo dangerous and irreversible procedures that could condemn her to a lifetime of severe post-op complications and infertility. No reasonable person would think so. Yet, the New York Times treats it like the girl just wants to get her ears pierced.

But this is how the trans cult works: they target confused children, recruit them, convince them that “changing their gender” will solve all their problems, and rush them through “gender-affirming care” with little or no psychological evaluation. By the time parents find out, it may be too late.

The New York Times went on to dismiss all the hubbub over the issue as much ado about nothing and Republican bellyaching. “These disputes are unfolding as Republicans rally around ‘parental rights,’ a catchall term for the decisions parents get to make about their children’s‌ upbringing.”

You can practically hear the disgust of the author lamenting that parents have any say in the upbringing of their children at all.

Curiously, the author admitted that the desire for parents to be in control of their children’s upbringing actually transcends partisanship. “Parents of all political persuasions have found themselves unsettled by what schools know and don’t reveal.”

You think? Parental rights isn’t an antiquated notion. Republicans get this. Thankfully, even some Democrats do, too. I just wish that more did.

19-year-old Iowa woman claimed to have football-sized tumor on her spine, but police say it was all a scam
CNN Slams Left-Pleasing ‘He Gets Us’ Ads for Jesus As a…Right-Wing Conspiracy?
‘American Taliban’ Was Released Early — and Promptly Met with an ISIS Recruiter
AP Stylebook recommends against ‘dehumanizing ‘the’ labels,’ like ‘the French,’ then deletes post due to ‘inappropriate reference to French people’
Watch a 5-year-old preacher go viral by baptizing his toys, singing with Grammy Award-winning singer: ‘You have lifted us all up’