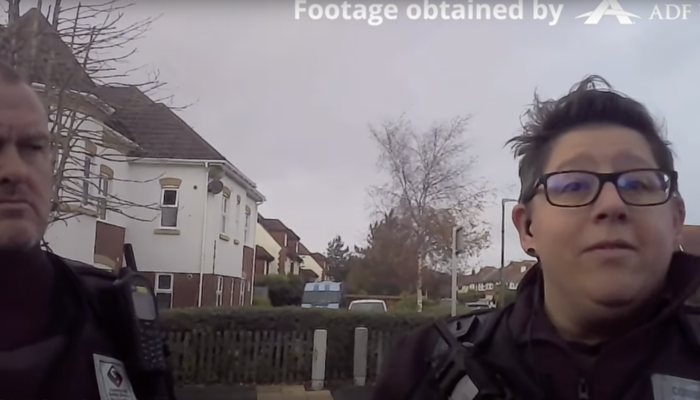 I didn’t know that we could get in trouble for particular thoughts or prayers in our heads now.

An innocent British army veteran was arrested for praying for his dead son outside of an abortion clinic in Bournemouth, England. Adam Smith-Connor is the second Brit in the last few months to be arrested for silent prayer, The Blaze reported.

Smith-Connor said that “22 years ago, I drove an ex-girlfriend to a facility where I paid for her to have an abortion. Many years later, I came to realize what I had done and it has been a source of great grief to me in my life.”

The father named his son Jacob and visited the clinic to pray for him and “other babies who have lost their lives to abortion, for their grieving families, and for abortion clinic staff.”

He was and is a harmless man yet was arrested for the thoughts he had … in his head.

Alliance Defending Freedom UK (ADF) reported that he was fined over 100 U.S. dollars after he was asked “What is the nature of your prayer today?” When the military vet told the officer that he was praying for his dead son, she said, “​​I’m sorry for your loss. But ultimately, I have to go along with the guidelines of the Public Space Protection Order, to say that we are in the belief that therefore you are in breach of clause 4a, which says about prayer, and also acts of disapproval around activities at the clinic.”

To say it plainly, because he opposed what happened in the clinic and stood silently outside, he was fined.

The whole story is insane. Here’s what Smith-Connor had to say about it.

I would never have imagined being in a position to risk a criminal record for praying silently. In the past, I assisted with abortions in hospitals as part of my army medical training, but now I pray for those who perform abortions because I realize how harmful abortion is to women and families, and that every single human life is valuable – no matter how small. Most of all, I’m moved to pray because of what happened to my son, Jacob.

Luckily, ADF is working on the case. It’s Legal Counsel Jeremiah Igunnubole said, “Nobody should be criminalized for what they believe, especially not when they express that belief silently, in the privacy of their own minds. Just like in the case of Isabel Vaughan-Spruce last month, Adam could now face prosecution for holding thoughts, and lifting those thoughts to God in prayer, within a censorship zone.”

As I mentioned in my report on Vaughan-Spruce last month, things in the U.S. aren’t much different. Pro-lifers are being targeted by authorities, especially by the FBI. Many pro-lifers’ homes have been raided or lives have been disrupted all for merely being pro-life. On the contrary, pro-abort vandals and attackers are receiving little to no reported reprimand for their villainous hatred for anything and anyone pro-life.

While I never would have imagined that mere thoughts and individual, silent prayer could be something to get arrested over, the left’s pro-abort mob will stop at nothing to target and abuse pro-lifers.