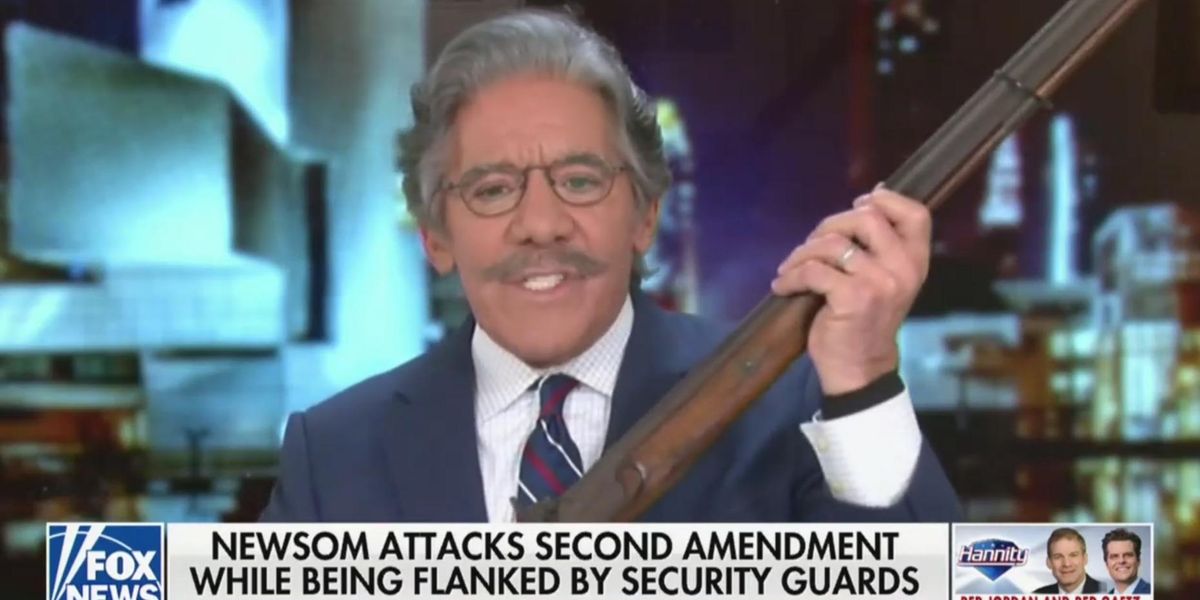 Fox News host Geraldo Rivera brandished a musket during a debate about the Second Amendment on Tuesday, suggesting that only antiquated firearms are acceptable to own.

Last week, Rivera falsely claimed the “AR” in “AR-15” means “assault rifle.” Actually, the two letters stand for “ArmaLite,” the company that designed and manufactured the original AR-15 rifle. Additionally, the AR-15 is not an “assault rifle,” which by definition refer to fully automatic rifles. AR-15s, rather, are semiautomatic.

Hannity reminded Rivera that “AR” does not “stand for assault rifle,” to which Rivera protested that he merely described the AR-15 as an “assault rifle”

“You probably have not fired one and compared and contrasted it to other weapons,” Hannity shot back. “The reality is, whether it’s a pistol, whether it’s a rifle, America’s Second Amendment is clear. The right of the people to keep and to bear arms shall not be infringed.”

Then invoking California Gov. Gavin Newsom’s recent condemnation of the Second Amendment, Hannity added, “He is surrounded by armed guards, Hollywood elite are surrounded by armed guards. The people that make this country great have a right to defend themselves and their family and their property. And by people trying to take away that right from them, they are denying them the very security that they, the elite, have.

“Why would you support that?” Hannity then asked. “What would you do if somebody broke into your home?”

u201cu201cThis is what weapons looked like when the Second Amendment was passed.u201d Geraldo Rivera brandishes a musket to point out high-powered firearms werenu2019t anticipated in 1791. (Video: Fox News)u201d

As Hannity was dressing him down, Rivera spoke to someone off camera: “Give me that rifle.” Rivera then appeared on-screen with a muzzle-loaded long gun.

“I’ll let everyone in the country — you wanna own this? You can own this,” he continued. “You can load it, you can do whatever you want with it. What you don’t want, though, is to give them weapons of war that they can tear the hell out of people with.”

Both Hannity and guest Pete Hegseth mocked and laughed at Rivera. Hannity said the gun is “very cute” and warned Rivera that he might get arrested in New York for possessing it. Hegseth joked that he will “ride to work on a horse.”

Hunter Biden’s Attorney Today Says that They Did Not Say that Laptop Was Hunter’s
This Republican will reportedly launch a presidential bid in February
CNN anchor wastes no time grilling Schiff over claims that got him booted from committee: ‘That turned out not to be true’
Catholic students kicked out of the Smithsonian ​for wearing pro-life hats
Top Biden official unable to spin her way out of contradiction exposed by CNN host on classified docs scandal