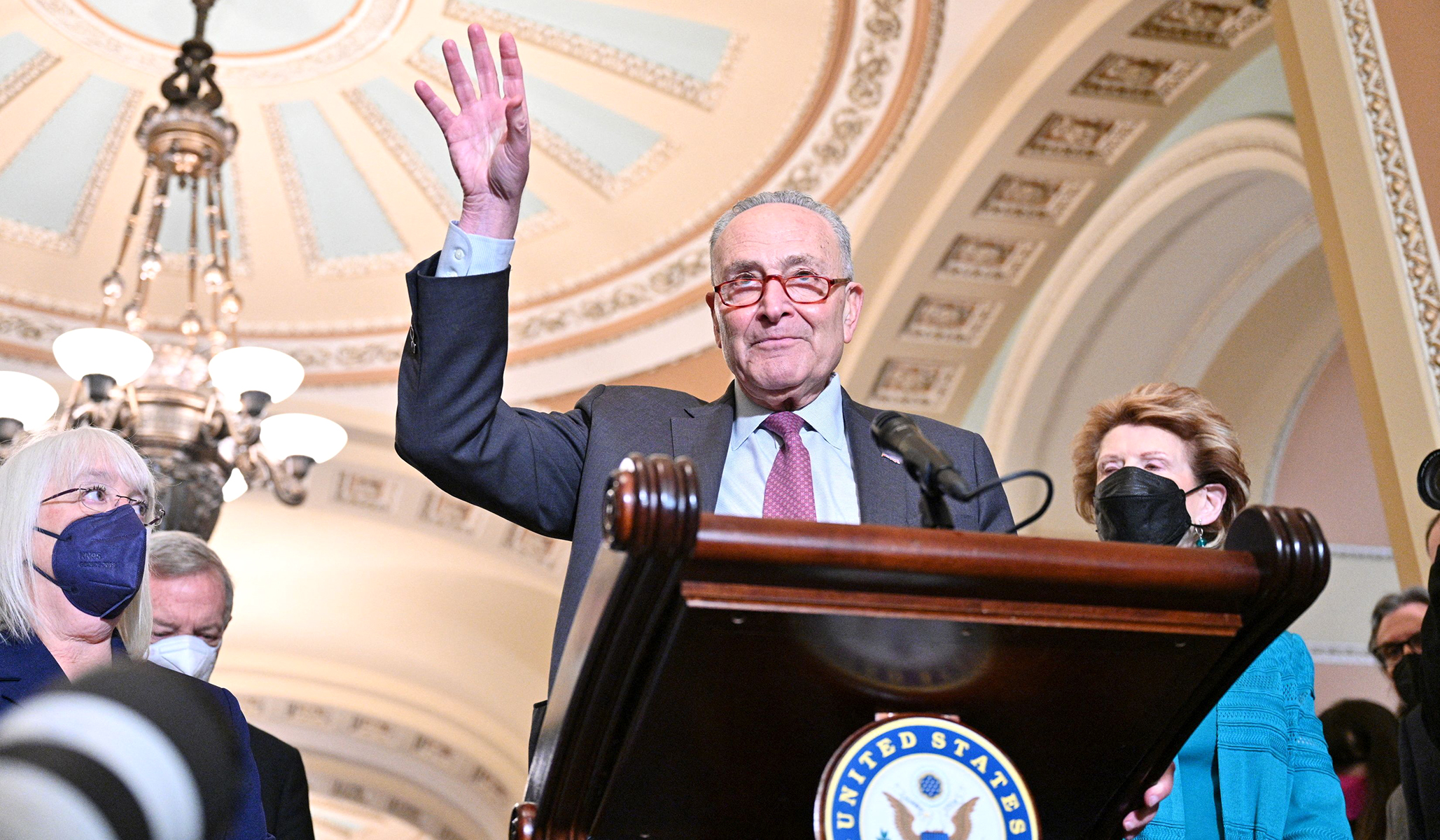 On the menu today: Democrats in Congress and across the country are searching for creative ways to avoid a trouncing in the midterms and the latest round of uncertainty in the Russia–Ukraine conflict.

The signs of it are everywhere: Democrats know that they should be preparing for a brutal showing in this November’s midterm elections. Glenn Youngkin’s victory in the Virginia gubernatorial race last year — and, more to the point, the substance and style of his successful campaign — were the first sign of it.

But the hits have kept on coming. In San Francisco last week, two progressive parents succeeded in their campaign to oust three school-board members for being . . . too progressive. Irked initially at how long it was taking for area schools to reopen for in-person learning during the pandemic, these two single parents did some digging and discovered even more to be upset about: an enormous budget shortfall, an intensive campaign to rename dozens of school buildings, and the replacement of a merit-based admissions program with a diversity-minded lottery, among other issues.

Suggesting just how central education has become to politics, San Francisco’s intensely progressive mayor, London Breed — who last fall violated her own mask mandate at a concert and defended herself by saying she was “feeling the spirit” — endorsed the school-board recall effort.

“My take is that it was really about the frustration of the board of education doing their fundamental job,” Breed said after the results were in. “And that is to make sure that our children are getting educated, that they get back into the classroom. And that did not occur. . . . We failed our children. Parents were upset. The city as a whole was upset, and the decision to recall school-board members was a result of that.”

San Francisco–based writer Gary Kamiya suggests in a piece for the Atlantic that the results of the recall seem to confirm the conservative narrative. Kamiya writes that conservatives have argued “that the Democratic Party is out of step not just with Republicans, but with its own constituents. . . . Progressives rejected such conclusions, insisting that the recall was simply about competence and was driven by an only-in-San-Francisco set of circumstances.” Kamiya concludes that the best way to read the outcome is “closer to the conservative view.” “At a minimum,” Kamiya writes, “the recall demonstrates that ‘woke’ racial politics have their limits, even in one of the wokest cities in the country.”

Over in Texas, meanwhile, failed Senate candidate and failed presidential hopeful Beto O’Rourke is gearing up to become a failed gubernatorial candidate, too. Running against incumbent Republican governor Greg Abbott, O’Rourke was most recently seen trying to pretend that he isn’t a fan of radical gun-control measures.

Asked about the promise he made during his run for president that he would “take away AR-15s and AK-47s,” O’Rourke attempted a hard about-face.

“I’m not interested in taking anything from anyone,” he said. “What I want to make sure that we do is defend the Second Amendment. I want to make sure that we protect our fellow Texans far better than we’re doing right now. And that we listen to law enforcement, which Greg Abbott refused to do. He turned his back on them when he signed that permitless-carry bill that endangers the lives of law enforcement in a state that’s seen more cops and sheriff’s deputies gunned down than in any other.”

As Charlie Cooke has noted, this is utter tripe. It also isn’t working. The latest poll of the race from the Dallas Moring News has Abbott up by seven points, 45 percent to 38 percent. O’Rourke himself remains underwater with voters: Only 40 percent view him favorably, while 46 percent say they have an unfavorable view of the candidate.

In 2018, O’Rourke lost the Senate race to incumbent Republican Ted Cruz by more than 2.5 points, despite outspending the Cruz campaign nearly three to one. In a $103 million race, O’Rourke raised $70.2 million, at least some of which came from outside the state. Here’s hoping he’ll waste as much money this time around.

Democrats at the national level also don’t appear to have much of a clue as to how to stave off a massive defeat. The New York Times has a story this morning on how Democrats are gearing up for a campaign to add generous Covid paid sick leave to the upcoming spending bill. A critic might say that this is simply the first small step toward making such a program permanent for illnesses other than Covid, a program Democrats have been demanding for quite some time.

Last week, meanwhile, Senate majority leader Chuck Schumer (D., N.Y.) made the first moves toward a vote on the Women’s Health Protection Act, a radical pro-abortion bill that has no chance of getting the necessary 60 votes to pass. Putting his caucus on record in support of an extreme bill — one that would invalidate nearly every pro-life law in states across the country — that can’t even pass is quite a move ahead of a difficult midterm battle.

The New York Times reports this morning that Russian president Vladimir Putin is calling an unscheduled meeting of his security council today amid rising tensions over reports that Russia will attack Ukraine imminently. The Kremlin’s spokesman indicated that Putin plans to deliver a speech at that meeting.

Late on Sunday, news outlets began to report that there would be a possible meeting between Putin and President Joe Biden, brokered by French president Emmanuel Macron. According to the Times, Putin and Macron spoke on the phone both on Sunday and early in the morning Moscow time, discussing the potential summit.

Biden also spoke with Macron over the weekend and agreed to the proposed meeting, provided that Russia pulls back from its threats against Ukraine. The Wall Street Journal reported late last night that Macron’s office says both Biden and Putin agreed to such a meeting “in principle.”

White House press secretary Jen Psaki said of the situation, “We are always ready for diplomacy. We are also ready to impose swift and severe consequences should Russia instead choose war. And currently, Russia appears to be continuing preparations for a full-scale assault on Ukraine very soon.”

A second White House official told the WSJ that there will be no summit if Russia invades Ukraine, and that Secretary of State Antony Blinken will meet first with Russian foreign minister Sergei Lavrov.

The ongoing tension was on display over the weekend as Ukrainian president Volodymyr Zelensky spoke at the Munich Security Conference, offering several comments critical of how Western countries have dealt with Russia’s posture toward Ukraine in recent years.

“It was here 15 years ago that Russia announced its intention to challenge global security,” he said. “What did the world say? Appeasement. Result? At least, the annexation of Crimea and aggression against my state.” He also asked for “an effective package of preventive sanctions to deter aggression.”

Zelensky asserted that if Russia attacks Ukraine, it will threaten Europe and all global security, not just his country. “We will defend our land with or without the support of partners, whether they give us hundreds of modern weapons or 5,000 helmets,” he said of his western allies. “We appreciate any help, but everyone should understand that these are not charitable contributions. . . . This is your contribution to the security of Europe and the world.” He also emphasized the importance of Ukraine joining the North Atlantic Treaty Organization, insisting that his country needs a “clear and comprehensive timeframe.”

Over the weekend, Politico reporting noted that remarks from Vice President Kamala Harris at the same conference, shortly after meeting with Zelensky, seemed to indicate that the U.S. is not changing its tune as the Ukrainian president requested:

Asked, “Is there anything new that you’re planning to offer Ukraine?” Harris was non-committal: “What I made clear in our meeting is that, again, this is a dynamic situation. And depending on what happens in the coming days, we will reevaluate the need that Ukraine has and our ability to support.”

Zelenskyy complained that if the U.S. believes a Russian attack is imminent, then it should implement sanctions now. A reporter referenced his argument and asked, “If you believe [Russian President Vladimir Putin] has made up his mind, what leverage do you really have? Why not put those sanctions in place now?”

Harris got tangled in her answers. “The purpose of the sanctions has always been and continues to be deterrence,” she said. “But let’s also recognize the unique nature of the sanctions that we have outlined. These are some of the greatest sanctions, if not the strongest that we’ve ever issued, as I articulated yesterday. It is directed at institutions — in particular, financial institutions — and individuals, and it will exact absolute harm for the Russian economy. And their government.”

A reporter pressed her: “But if Putin has made up his mind, do you feel that this threat that has been looming is really going to deter him?”

“Absolutely,” Harris said. . . . “As the president has said,” Harris told reporters just minutes after saying the threat of sanctions will deter Putin, “we believe that Putin’s made his decision. Period.”

As has been the case for quite some time, it’s hard to predict where this potential conflict will go, but Macron’s recent efforts at diplomacy are slightly encouraging.

ADDENDUM: The Times published a nice interview late last week with Yale professor Laurie Santos, who teaches a class on psychology, happiness, and the good life. One of her most interesting observations is how so many of her students seem to be plagued by chronic anxiety. While I might not fully agree with her diagnosis of the problem, her insights reminded me of some of the insights in Cal Newport’s book Digital Minimalism, which highlights how anxiety disorders among young people have risen almost in exact conjunction with the rise of ubiquitous smartphones and social media.

Manufacturing consent: How engineered famine will have the masses BEGGING for FEMA camps
TIMELINE: There’s a REASON why no one is asking about the Jan. 6 pipe bombs anymore
FTX’s “SBF” Tells All Sorts of Stories About His Actions – Plays The “I Didn’t Know” Excuse
Breaking: Appeals court rules against Trump, allows DOJ to restart investigation of documents seized at Mar-a-Lago
Megyn Kelly, John Stossel Take on Liberal Media Bias, Envy, and Hatred