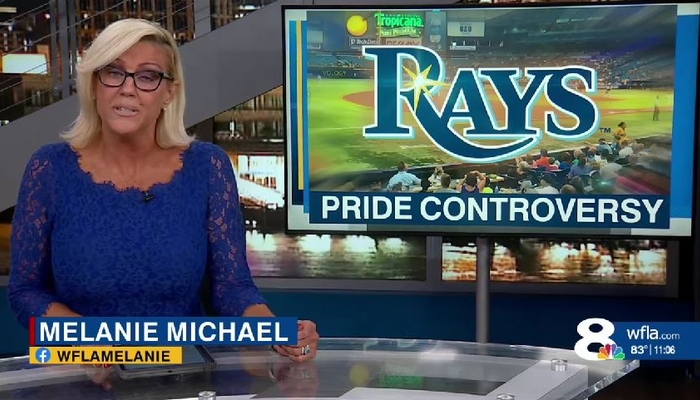 Only certain athletes are brave when they take stands that displease their corporate masters. While it’s heroic for former NFL quarterback Colin Kaepernick to give the league headaches by kneeling at the National Anthem to protest racism and police brutality, a refusal to go along with a corporate “Pride Night” is condemned, when done by Major League Baseball players.

Tyler Kepner, the national baseball writer for the New York Times, called out five Tampa Bay Rays players for daring to not participate in yet another silly concept — wearing special rainbow patches on their jerseys — in “An Attempt at Inclusion Proves There Is More Work to Do,” on the front of Tuesday’s Sports section.

Something was missing in the top of the eighth inning on Saturday at Tropicana Field in St. Petersburg, Fla. The Tampa Bay Rays used two relief pitchers that inning — the left-handers Brooks Raley and Jalen Beeks — who wore jerseys without a patch on their right sleeve.

This was not a manufacturer’s error or an equipment manager’s mistake. The patch was the Rays’ starburst emblem rendered in rainbow colors, like the “TB” logo on the team’s cap, as part of the team’s Pride Night promotion. Raley, Beeks and a few other teammates chose to wear caps and jerseys without the rainbow accents.

Kepner actually named and shamed “those who did not wear the rainbow insignias.” Even the photo caption got into the judgmental act: “Brooks Raley was one of the players who chose not to wear the Pride Night insignias. He pitched poorly, allowing two hits and two runs.”

….by allowing the players to opt out of the promotion — and to use the platform to endorse an opposite viewpoint — the Rays undercut the message of inclusion they were trying to send. Words like “lifestyle” and “behavior” are widely known tropes often interpreted as a polite cover for condemning gay culture.

….The resistance of some players in St. Petersburg — despite the Rays’ best intentions — showed how far the movement still has to go.

The Times’ message to religious objectors: Shut up and play ball. Kepner became a my-way-or-the-highway boss-man, lecturing players about dress codes from his Times perch.

Players have some leeway with on-field style — the length of their pants, the angle of their caps, the colors of their arm sleeves, and so on. But rarely are players given the choice of which cap and jersey they want to wear.

Kepner praised the Rays’ “admirable track record on social issues,” including same-sex marriage and gun control while complaining that in this instance, “some players were allowed to send a different message.” Not even passive resistance to politically correct public relations is allowed.

At the end of the piece, Kepner bizarrely invoked the supernatural.

In any case — if you believe in such things — karma got the last word on Saturday. The relievers in the standard-issue uniforms immediately gave up a two-run lead, sending the home team to defeat.

No more acting on your personal beliefs, according to the Times. Just stay quiet and do what your corporate chieftains tell you, no matter how personally offensive you may find it.

The Times has previously embraced the WNBA’s embrace of abortion mill Planned Parenthood but was bugged by flags and patriotism displayed at NFL games.