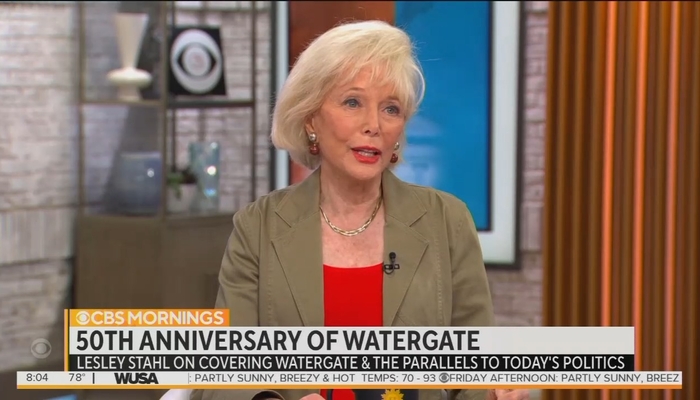 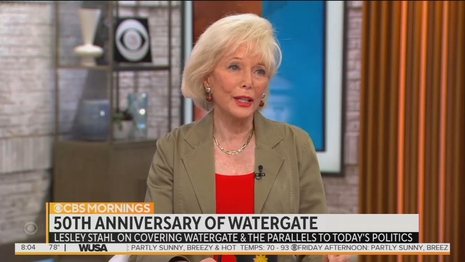 On Friday’s CBS Mornings, they promoted a ponderous two-hour documentary on Friday night hyping Watergate: High Crimes in the White House. They tied it into the new anti-Trump hearings. Co-host Tony Dokoupil began: “As the January 6 hearings continue in Washington, the Watergate story continues to echo today offering potential lessons about the current political landscape.”

Yes, the lesson is that CBS News is still using the guise of “news” to promote Democrats and punish Republicans. They brought in Lesley Stahl, who started 50 years ago at CBS News, to connect the Watergate hearings to the January 6 hearings:

TONY DOKOUPIL: What was the moment that made it not just a story that a rookie is on, but a story the whole nation is paying attention to?

LESLEY STAHL: Well, hearings. It finally went into the Senate and they staged these incredibly long, stunning hearings where there was a narrative because they started with the lower-level people and built and built. And as the hearings progressed, you realize the whole thing was pointing first to the White House, then to the Oval Office.

And you kind of get that same sense now, that as these hearings progress, you know, the arrow is pointing and moving, and there is that kind of similarity.

No one on the CBS set is going to suggest that no, the Senate Watergate Committee was assembled by letting the Republican minority choose its committee members, unlike the Pelosi-handpicked Republicans on the January 6 panel.

Naturally, CBS fretted that most people aren’t interested in these hearings, and you get the usual moan that back in the old days, you couldn’t watch anything on TV but the Watergate hearings (and there was no Fox News, every network hated Republicans).

DOKOUPIL: I do wonder, though, back then, 80 percent of Americans watched at least some of the hearings. “Sunday Morning” reported on Sunday that 30 to 40 hours was what the average American household consumed in terms of those hearings. They were long and people were watching.

STAHL: But there was nothing else to watch. We had three networks, all three covered them live. If you turned on television or radio, you had it in your face.

It was a little more shocking that Stahl admitted Trump did things a “great majority” of Americans liked. When did CBS ever admit that before? But then she said at least Nixon did some liberal things.

STAHL: You want to understand why the other side is supporting him and because in both cases, these Presidents did things that a great majority of the country liked. You know, Nixon, he was not a down the line, conservative.

STAHL: He was an environmentalist. He had a really good civil rights record.

STAHL: And he started affirmative action, and that is one reason a lot of women and minorities came into the workforce.

But CBS and the rest of the liberal media found the supposed mountain top of their profession by forcing moderate Nixon to resign. To this day, they don’t quite understand why half the country doesn’t find them to be objective or “mainstream” in their journalistic pursuits.