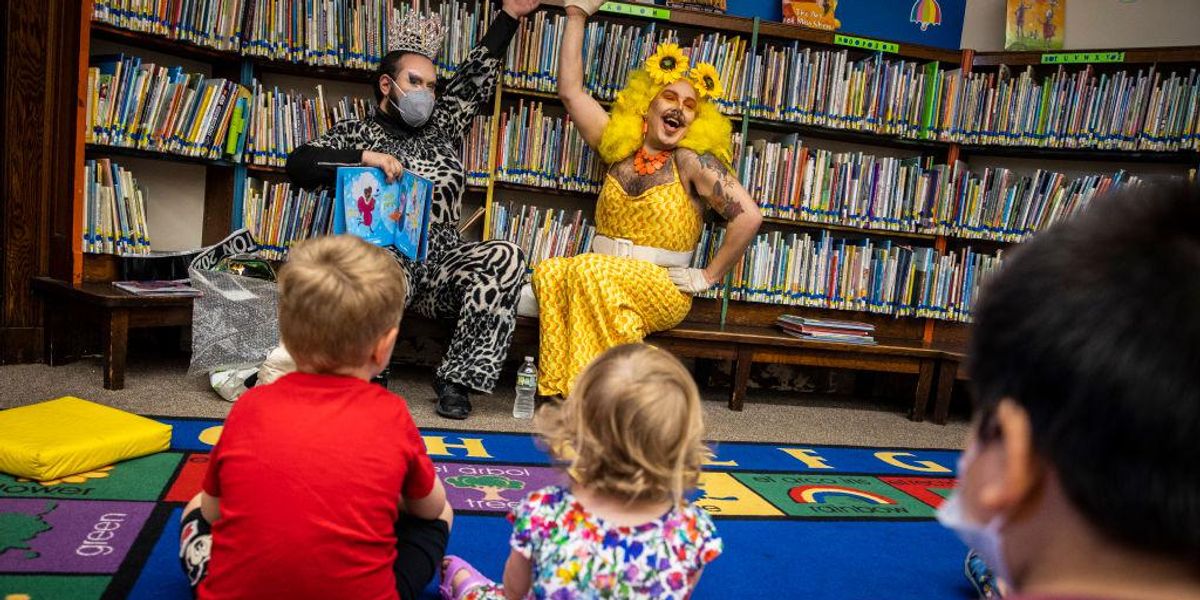 It turns out Drag Queen Story Hour isn’t just an organic movement sprouting up out of nowhere – there’s an entire organization behind it online.

When you go to the Drag Queen Story Hour website, the first thing that pops up is an opportunity to donate to the organization. Once you click that link, you’re brought to an external PayPal link that allows you to set up monthly donations to the organization. The minimum preset amount is $25, or you can set a custom amount that you want to donate. On the homepage it says, “DQSH (Drag Queen Story Hour) captures the imagination and play of the gender fluidity of childhood and gives kids glamorous, positive, and unabashedly queer role models.”

The website also states that story hour is “where dress up is real.” Remember when you were a kid and you dressed up as a princess or a soldier? I wish I could go back and dress up as a billionaire – you know, since dress-up is real.

This will make you weep: Of those 26 states, 14 of them voted for Trump for president at least once in the last two presidential elections.

Every state that has a chapter has two to five cities that host. While we’re focused on what’s happening in the news or what’s happening in our own lives, the organizers have taken over half the states and gotten them to host their events that groom children to “be themselves.”

Except they really don’t want to let them be themselves at all.

When I was younger, my parents always encouraged me to do what I wanted to do with my life, but there were always limitations. For example, I wanted to play guitar, but to my dismay, I couldn’t just pick up a guitar and play seamlessly. I had to take lessons. When we’re children, our options are endless due to imagination, but that doesn’t mean that they’re all attainable. How many of you wanted to be doctors when you were kids, but then grew up and realized how much schooling and money that would cost? In other words, as we were growing up, we had to learn that chasing our dreams comes with a cost.

But when it comes to DQSH, kids aren’t taught to be themselves at all, or even to work hard to realize their dreams. They’re taught they have to become someone else entirely – someone other than what God made them. Including that boys can become girls and girls can become boys.

Just look at some of the books the New York chapter of DGSH recommends:

So, how do we combat this? We have to put our time and effort into offering something better. I started contacting my local libraries to ask them if I could host a Christian Kids Story Hour. I went to the bookstore, bought some Christian children’s books, and plan to read them to as many listening ears as I can. We need to welcome children into an environment that doesn’t ask them to change, that doesn’t ask them to reject real science, and shows them that God loves them as they are – no matter how broken, whether boy or girl.

I’ll admit, I’ve gotten turned down. Okay, I’ve gotten turned down a lot. However, I’ve officially scheduled my first Christian Kids Story Hour, and I’m excited. I’m doing it out of my own pocket, without asking for donations. Just trying to shine a light in the darkness where I live. How long can they keep turning us down if more of us do the same?