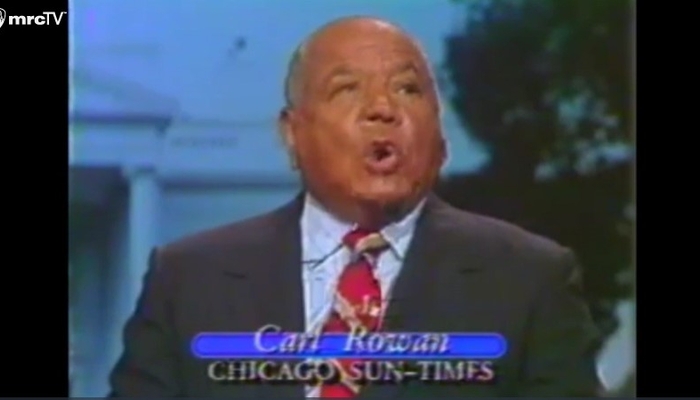 We’re now two weeks after the Supreme Court overturned Roe vs. Wade, returning the issue of abortion to the states. And yet the hate and rage is still going strong from journalists and entertainers on the left. This week, aging star Bette Midler compared Clarence Thomas and other Court conservatives to Islamic extremists.

But it was 31 years ago this week that one of the ugliest, most disgusting attacks against Thomas appeared. Appearing on the July 7, 1991 edition of Inside Washington, the late Chicago Sun-Times columnist Carl Rowan snarled at Thomas’s nomination: “Clarence Thomas is the best only at his ability to bootlick for Ronald Reagan and George Bush…They didn’t pick him because he was black. They picked him because he’s a black conservative.”

He then compared the Black conservative to racist KKK member David Duke:

And the thing that bothers me about this appointment: If they had put David Duke on, I wouldn’t scream as much. Because David Duke, they would look at David Duke and reject him for what he is. If you gave Clarence Thomas a little flour on his face, you’d think you had David Duke talking.”

Also in 1991, USA Today columnist Barbara Reynolds spat venom: “If Hugo Black, who once was a member of the KKK, could become a distinguished liberal justice, there is a hope that a Negro can turn black.” For more of the hate from Thomas’s confirmation hearings, see this NewsBusters study.

The rage and vile attacks against Clarence Thomas aren’t new. But they are just as disgusting.

For more examples from our weekly flashback series, which we call NewsBusters Time Machine, go here.

Camping with the Foxes, 2022 Edition
Ilhan Omar would have had the intellectual fight of her life
Column: Dana Milbank’s Uncivil War on GOP ‘Destructionists’
Democratic Rep. Sean Maloney says that there is ‘broad agreement in our caucus’ that Democrats ‘have a likability problem’
Iran Is Refusing to Accept the Surrender of the European Union