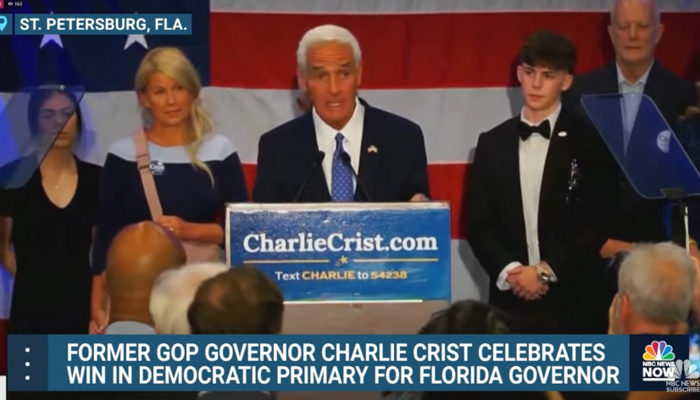 Crist – who was quite the liberal Republican himself as governor — was crowned a “centrist” (at least the paper isn’t suggesting he’s a conservative “Chain-Gang Charlie” anymore) by Mazzei, who piled far more unflattering adjectives on DeSantis, a “polarizing” potential Republican presidential candidate who often criticizes the mainstream media:

Florida Democrats chose Representative Charlie Crist as their nominee for governor on Tuesday, betting that the former Republican governor who campaigned on a return to political decency was their best bet to try to defeat Gov. Ron DeSantis, the polarizing Republican incumbent.

Mr. Crist’s blowout victory sets up the general election against Mr. DeSantis as a contest between a centrist and a hard-right conservative, with Democrats believing that the well-known and peaceable Mr. Crist can attract independent voters and Republicans who are fed up with Mr. DeSantis’s aggressive right-wing policies.

She added further scorn for DeSantis, saying he’s “a Republican eager to fight public health expert.” This was despite the fact that he led his state to success during the COVID pandemic economically, educationally (school closings were brief) as well as in vaccination rates and COVID death rates.

The reporter quickly skipped over those inconvenient details: “Democrats see a narrow path to defeating Mr. DeSantis, in trying to cast him as a divisive leader who plays up his policies as promoting freedom despite restricting the rights of women, Black and Hispanic Floridians and the L.G.B.T.Q. community.”

Mazzei ended with a micro-anecdote to make Crist (i.e. “Charlie”) look personable. A local Democratic was quoted in conclusion: “Charlie didn’t have to come to my neighborhood to have a burger — but he did.” Stop the presses!

Ironically, Mazzei was tilting toward the more liberal Fried on Monday (while still engaging in tiresome DeSantis-bashing) in “The Florida Primary for Governor is Mostly About Ron DeSantis”:

Mr. DeSantis, whose contrarian coronavirus policies drew scorn from public health experts but propelled him to national political stardom, seemed unbeatable a year ago, with a job approval rating near 60 percent….

But living in Florida has become less and less affordable. And a hard-right legislative agenda of stoking cultural issues has restricted abortions after 15 weeks of pregnancy, banned instruction about sexual orientation or gender identity in some elementary school grades and revoked a special tax arrangement for Disney after the company had a political spat with the governor.

Such strident policies, coupled with the U.S. Supreme Court decision that eliminated federal abortion rights, have resonated with enough Floridians that Democrats now believe there is a narrow path to beat Mr. DeSantis, whose job approval has dropped to about 50 percent.

She pointed to some Crist campaign mailings to suggest “the race has tightened as Ms. Fried has homed in on a message centered on abortion rights.”

The race had not in fact tightened: Crist beat Fried handily on Tuesday, 60 percent to 35 percent.