Crocs has holes in its shoes and now in its story too. 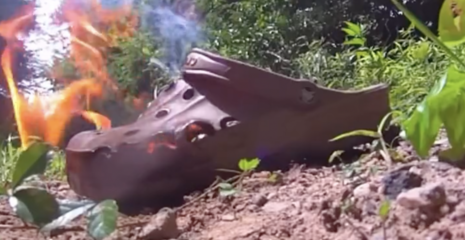 At the end of December, the billion-dollar shoe brand, Crocs, announced its sponsorship of a kids drag fashion show for the RuPaul’s Drag Convention in London this past weekend. After ample backlash condemning the grooming behavior of the company, Crocs Europe silently deleted all signs of sponsorship.

Did they think we wouldn’t notice?

In a since deleted Instagram post, Crocs posted: “Hit them with your catwalk, kids 👠 Bring it to the runway with your parent/guardian for the #DragConUK 2023 Kids Fashion Show, Sunday 8th January on the @crocseurope Main Stage!” It then continued with more specifics for kids to know when and where to go, adding, “No pre-registration required. All kids under 18 are welcome, please report to the Main Stage at 12:45PM to participate 💓”

The shoe brand also announced an exclusive jibbit (the charm that sticks in the holes of the shoe) that was supposed to be available at the drag convention and even planned to give away three free tickets to the event in a contest.

Both of those posts are now unavailable on Instagram.

It’s likely, but not yet confirmed, that Crocs brand pulled its sponsorship or at least its obvious sponsorship of the children’s drag show as a result of the flack it received from numerous groups and individuals who spoke out against the grooming.

Libs of Tiktok, a popular anti-grooming social media page, tweeted an image of the ad and condemned the idea of kids in drag. Over 23,000 people liked the tweet and more than 8,500 people retweeted its message in agreement.

Jimmy Failla from “Fox Across America” called the partnership “disgusting” and said “How is it okay to bring kids to a sex show unless you’re just trolling the other side because you know it’s culturally abhorrent to them and so you’ll do it at the expense of your kid. This is not good for kids.”

One customer set his crocs on fire and tweeted a video of them burning to the ground.

PJMedia said Crocs should be “ashamed” that they were “dragging innocence through the mire in service of woke ideology.”

While Crocs likely caved to the ample and justified backlash, Teletubbies, another sponsor of the event, maintained it’s position.

The popular children’s show characters danced on stage at the drag event this past weekend as backup dancers for a drag queen with his hair formed into what looked like a traffic cone. Teletubbies has also kept up its social media posts promoting the event.

Teletubbies and Crocs are both still listed on the RuPaul’s DragCon London sponsors as of Jan 9 and no official Crocs statement has been recognized publicly.

Time will tell if Crocs will maintain its silence in the hope the backlash will blow over, or if it will hold itself accountable and apologize.

Honestly, not expecting the latter.