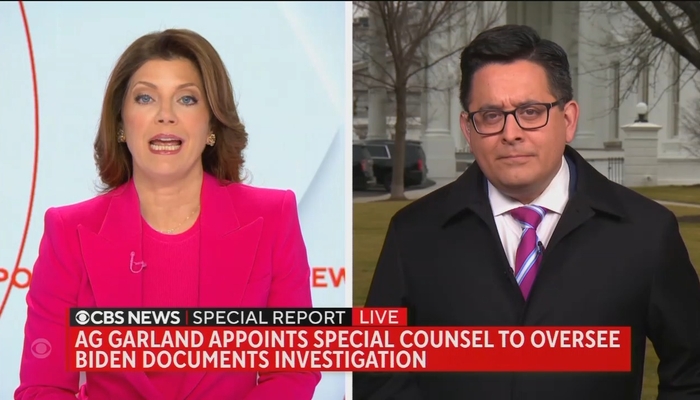 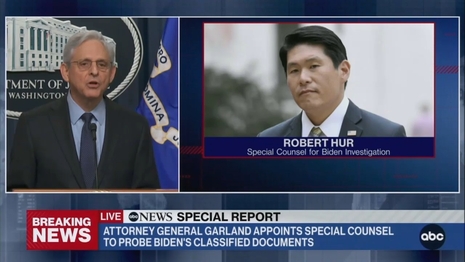 After days of occasionally mealy-mouthed defenses of President Biden over news that classified documents were found at the Penn Biden Center and then a testy Wednesday White House briefing, the damn broke Thursday afternoon following Attorney General Merrick Garland’s appointment of Special Counsel Robert Hur to investigate that and at least two other discoveries of classified documents at Biden’s Wilmington, Delaware residence.

ABC, CBS, and NBC all broke in for Garland’s announcement and, with few exceptions, they brutally savaged the President and his administration for misleading the public and withholding information about these discoveries until well after the midterm elections.

CBS in particular didn’t hold anything back. Having first broken the Biden documents scandal, correspondent Adriana Diaz was struck by the fact that Garland revealed December 20 was when the “documents were found in President Biden’s garage of his Wilmington home” even though it was only Thursday when that became public. She added that squared with the lack of White House transparency on the documents found at the Penn Biden Center.

Praised by CBS Evening News anchor Norah O’Donnell as for having “press[ed] the White House press secretary for more information” Wednesday and was “stonewalled”, White House correspondent Ed O’Keefe started with a sentiment many Americans feel, “where to begin, Norah?”

Loaded for bear, O’Keefe occurred with Diaz’s observation about the delay from December 20 to January 12 on finding out about documents found at Biden’s home and observed it made Biden’s “quite glib” comments to Peter Doocy about the documents and his Corvette being in a “locked garage” all the more noteworthy.

“Either way, that would appear to be in violation of federal law. It says classified documents aren’t supposed to be sitting in someone’s garage,” O’Keefe added.

O’Keefe then turned up the heat, starting with the reality that statements this week from the White House counsel were woefully incomplete and how this all flew in the face of Biden’s campaign promise to be transparent and that adults would be back in charge (click “expand”):

O’KEEFE: The White House counsel’s office has issued two statements since CBS News first broke this story. They were vague, to some extent, now about the timeline, at least based on what the attorney general told us. While they may have been cooperating with the Justice Department, and while they are claiming they are being somewhat transparent now by telling us what they know, and the President saying he was surprised, he withheld information about that second batch. He also withheld details of the timeline. And that’s going to raise a lot of questions, at least in the public and political space, about why a President who vowed to be so transparent from day one has decided to withhold this. Remember, there was nothing stopping the president of the United States from disclosing this when he first learned about it in November. Nothing that would have stopped him from saying before the justice department began, we found these, we weren’t supposed to have them, we’ve turned them over, and get ahead of it. Instead, for whatever reason, among the questions we haven’t been able to answer is why he has decided to withhold this information. And we’ll see later today when the press secretary is scheduled to take questions again, whether or not more information is forthcoming or whether this announcement from the special counsel now means they have to withhold even more information.

O’KEEFE: But also important to point out: For somebody who campaigned on trying to bring professionalism and better management of federal government to Washington, he now joins his predecessors as the subject of an investigation by a special counsel.

O’Donnell agreed: “Why did it take two months for this to become public, as Ed has pointed out? And, actually, I think kind of one of the most important things: what’s the content of these documents that were marked classified? We do know that some were highly classified.”

Diaz and O’Donnell only then made a brief footnote about how Trump’s Mar-a-Lago case involves hundreds of documents, but the damage was already done.

Welker started by insisting the number of documents between the Biden and Trump cases are different, but she too slammed the White House by saying Garland’s timeline “raise[d] questions about how all of this was handled because, of course, President Biden campaigned on a promise to be transparent.”

“We still have a lot of unanswered questions here, Tom, and now the appointment of this special counsel. This is a very significant development indeed. And of course, we continue to try to get a response here from the White House,” she added.

LLAMAS: And Crystal — and Kristen, to be absolutely clear here. There is the issue of transparency correct because it has been news organizations that have been breaking the news about these documents. The first batch, the second batch, and now we’ve learned about this third document, a single document that was also found at his home.

WELKER: It’s such an important point, Tom and I pressed White House Press Secretary Karine Jean-Pierre here yesterday during her briefing on that very point that President Biden did campaign on a promise of transparency. These stories are being broken by the news media, not by the White House. Now, the White House counsel’s office did put out a statement vowing to update the public on any information. That statement went out before NBC News broke the story about the existence of a second batch of classified documents so there are still going to be a lot of questions swirling about that issue of transparency…[T]his is a very significant development here today.

Along with CIA hack and correspondent Ken Dilanian spinning for Garland and emphasizing Hur “was a Republican appointee,” legal analyst Danny Cevallos defended the Justice Department hiding this information for as long as it did, even if it kept voters from knowing about it in the midterms (click “expand”):

LLAMAS: I want you to walk us through the timeline here because I think Republicans may seize on this piece of information, which we learned from the attorney general just now. November 4th, the department of Justice is notified about these classified documents. The FBI doesn’t start their investigation, according to the attorney general until November, 9. There is a big day in between those two dates and that’s November 8, Election Day. Is this just standard operating procedure? Is this the way things work, the protocol? Or do you think they tried to leave politics out of this?

CEVALLOS: This is a question that at some point, DOJ may have to answer for because there was some delay. You can see it in Josh Hawley’s letter that he wrote to Merrick Garland. He lays out this exact same concern and we may never know — Merrick Garland may not give a press conference where he explains the reasoning behind that decision. But, ultimately, it may be a simple as DOJ was investigating, and DOJ policy is they don’t come out and give status updates on their investigations. They investigate. And the only way a target usually finds out there’s a problem is if they’re indicted, and if not, then they may never know they were ever a target or somebody that was being looked at by DOJ. That’s the way DOJ works, and that’s how they’re very, very effective at what they do, which is prosecute and secure convictions.

ABC’s World News Tonight anchor David Muir called it “an extraordinary turn of events” and chief Justice correspondent Pierre Thomas agreed: “David, I have to tell you, the attorney general used the word ‘extraordinary,’ in part because it is extraordinary. You have a sitting President, two years into his term, and now he will be the subject of a full-scale criminal investigation.”

Having said on Good Morning America that “the optics are bad” with the country facing another story of someone having classified documents where they shouldn’t be, Thomas again explained this to viewers. But this time, he noted the presence of documents at his home made Biden’s case he was unaware of these documents more difficult since this is a topic intelligence officials take very seriously (click “expand”):

THOMAS: The bottom line here, David, is that these documents, which are classified, are supposed to be housed in very specific locations. You heard the attorney general say that this office — the Penn Biden Center office was not a place that was prescribed to be allowed to keep these kinds of documents. And when that occurs, the Justice Department takes it quite seriously, and now, I’m told, as well, that the key for this decision, in part, was built on the fact that these new documents discovered in December, discovered in December, were at his garage. It makes it more difficult to explain away the notion that the President himself might not have been personally involved in getting those documents to his private property. That will have to be determined, but the FBI has begun an investigation to look and talk to the people involved in moving those documents, David. Extraordinary situation.

THOMAS: But again, David, the bottom line is the documents were out of place for nearly six years. And the Justice Department now is tasked with finding out why were they out of place, who was responsible for putting them there, and what were the circumstances? Another key, David, they will look very closely at the documents, I’m told, to look at the content and to see if there’s any financial gain the Vice President, now President, would have gotten out of having these materials. That will be key as well.

MUIR: Yeah. Make no mistake, Pierre, President Biden faces serious questions about these classified documents himself. He did address the issue yesterday and again this morning.

MUIR: [B]ig picture here, Pierre, people at home are going to be saying, classified information when you look at the current President, the previous President, and classified documents discovered in offices, private offices, and at their homes? There are some serious questions, big picture here, about the handling of classified material in this country.

THOMAS: Absolutely, David. This is supposed to be some of the nation’s most sensitive secrets, the things that are supposed to be guarded with all due haste, quite frankly, I’ve been talking to sources for years, and they’ve all made the point that they do not play around, and they do not allow people to be sloppy in handling of classified information. The nation’s security is at risk. And David, in a practical sense, this is what the current administration will now face. Aides for the President, people associated with him, now being called before a grand jury. That is likely to happen. And at some point, Mr. Hur may even make the decision that he needs to talk to the President himself.

To see the relevant transcripts from January 12, click here (for ABC), here (for CBS), and here (for NBC).