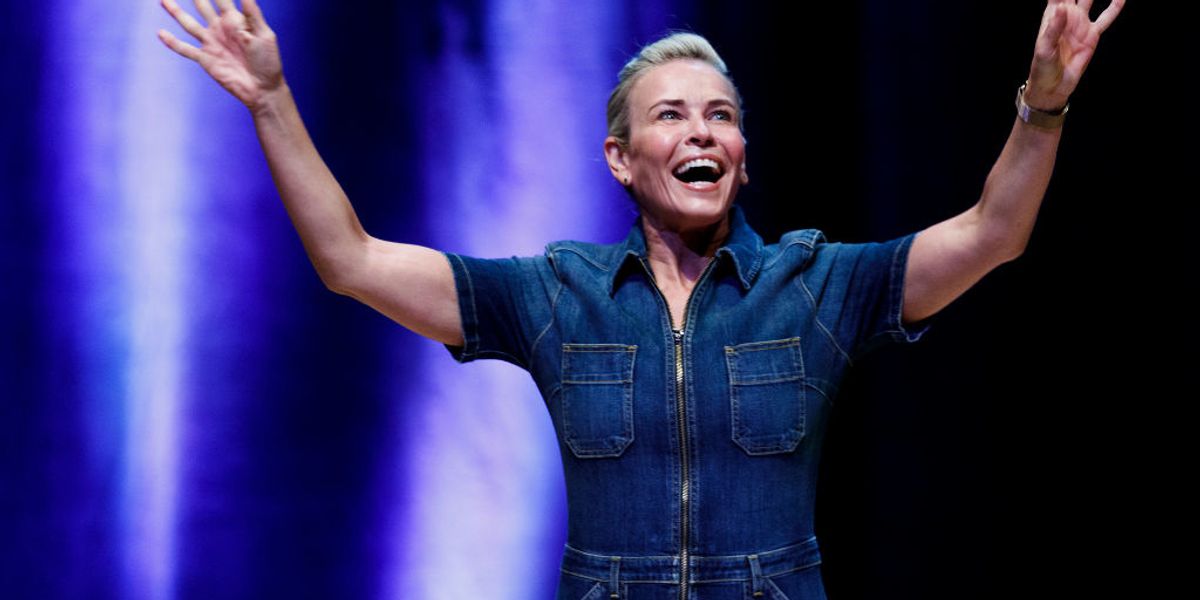 Comedian Chelsea Handler made a controversial comment this week when she ordered 50 Cent to not support President Donald Trump in the 2020 presidential election. Handler told 50 Cent that he’s not allowed to vote for Trump because he is a black man. Many deemed the statement to be “racist.”

The next day, Jackson followed up with a tweet that said, “Yeah, i don’t want to be 20cent. 62% is a very, very,bad idea. i don’t like it !” The tweet included a video clip from Fox News discussing 50 Cent’s desire to not pay higher taxes.

Then Chelsea Handler, Jackson’s ex-girlfriend, lambasted 50 Cent for supporting Trump. “You used to be my favorite ex-boyfriend,” she told Jackson.

To which 50 Cent responded, “oh my God this is effecting my love life now. @chelseahandler I love ya Gator, don’t let Trump and Joe Biden come between us girl.”

“Hey f***er! I will pay your taxes in exchange for you coming to your senses. Happily! Black lives matter,” Handler wrote to Jackson. “That’s you, f***er! Remember?”

Hey fucker! I will pay your taxes in exchange for you coming to your senses. Happily! Black lives matter. That’s yo… https://t.co/Y2XzSSTcCn

Handler appeared on “The Tonight Show” on Friday, where she discussed her ex-boyfriend who she briefly dated in 2011.

“So he doesn’t want to pay 62 percent in taxes because he doesn’t want to go from ’50 Cent’ to ’20 Cent’ and I had to remind him that he was a Black person, so he can’t vote for Donald Trump and that he shouldn’t be influencing an entire swath of people who may listen to him because he’s worried about his own personal pocketbook,” Handler told late-night TV host Jimmy Fallon.

Handler’s assumption that Jackson has to vote for the Democratic presidential nominee because he is black, is reminiscent of Joe Biden’s abrasive comments in May when he said, “Well, I’ll tell you what: If you have a problem figuring out whether you’re for me or Trump, then you ain’t black.”

Many online commenters deemed Handler’s comment that a black man can’t vote for Trump as “racist.”

Radio host Wayne Dupree said, “This is proof that white liberals are the most racist, rude, and nasty people towards the black community.”

Allie Beth Stuckey, host of the “Relatable with Allie Beth Stuckey” podcast on BlazeTV, said, “Chelsea Handler made a documentary about how to be less racist, which means she made lots of money at the expense of black people. Obviously this makes her the voice of black America.”

“The Rush Limbaugh Show” producer Bo Snerdley tweeted, “This woman is the definition of ignorant and arrogant – at the same time. She has the right to “remind” Black person they are Black?”

During the interview, Handler told Fallon she is willing to “seal the deal in more ways than one” in order for her ex-boyfriend to not vote for Trump. “I might be willing to go for another spin, if you know what I’m talking about,” she hinted.

On Friday’s #FallonTonight, @50cent’s ex-girlfriend, @ChelseaHandler, scolded him: “I had to remind him that he was… https://t.co/wDKaYj8w8x

Pope Francis praises NBA players for racial justice protests
This Day in Liberal Judicial Activism—November 21
Twitter to Give @POTUS Account to Biden on Inauguration Day Whether or Not Trump Concedes
Philadelphia previously rejected Dominion Voting Systems for fear of foreign interference… who knew?
Hey, Remember When Media Outlets Were Concerned About Vote Fraud?