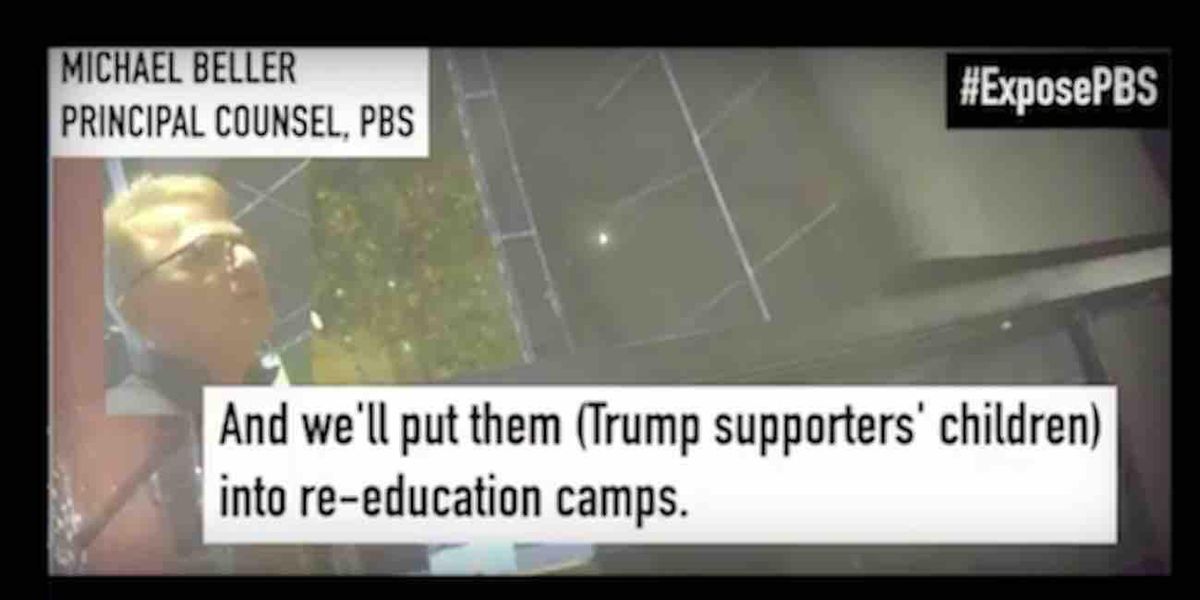 A PBS staff attorney is out of a job after saying on a secretly recorded video that the federal government should take children away from people who voted for President Donald Trump and put them in “reeducation camps.”

The Project Veritas video recorded prior to the 2020 election shows now-former PBS principal counsel Michael Beller saying “these kids who are growing up knowing nothing but Trump … for four years,” and “you’ve gotta wonder what they’re gonna be like … they’ll be raising a generation of intolerant, horrible people — horrible kids.”

Beller also said that “even if [then-Democratic presidential nominee Joe] Biden wins, we go for all the Republican voters, and Homeland Security will take their children away … and we’ll put them into re-education camps.”

He also called them “enlightenment camps” and said that “they’re nice. They have Sesame Street characters in the classroom, and they watch PBS all day.”

How did PBS react?

PBS released a statement saying, “This employee no longer works for PBS. As a mid-level staff attorney, he did not speak on behalf of our organization, nor did he make any editorial decisions.”

PBS response to Project Veritas: “This employee no longer works for PBS. As a mid-level staff attorney, he did not… https://t.co/z3p9rPcd73

The statement continued: “There is no place for hateful rhetoric at PBS, and this individual’s views in no way reflect our values or opinions. We strongly condemn violence and will continue to do what we have done for 50 years — use our national platform and local presence to strengthen communities and bring people together.”

“We strongly condemn violence and will continue to do what we have done for 50 years – use our national platform an… https://t.co/7XYCtCYPbX

What else did he say on the video?

In the video, Beller also said “Trump is close to Hitler,” and that if the president were to win the election, the response would be to “go to the White House and throw Molotov cocktails.”

He also said “PBS has like, real news” and “CNN doesn’t have real news anymore. It’s just talking heads talking about Trump all day long.” But Beller said Fox News “makes me want to throw up after five minutes” and that it’s full of “Joe Biden s**t” that’s “all made up. It’s all ridiculous.”

As for his fellow citizens, Beller said, “Americans are so f***ing dumb. You know, most people are dumb.”

Well, except for the elite who dwell in Washington, D.C., and are “educated and know stuff” — unlike those who live in “one of these other towns or states where everybody’s just stupid.”

Beller also commented on the coronavirus, noting that it’s “great” that “COVID is spiking in all the red states right now.” When asked why, he replied that “either those people won’t come out to vote for Trump — you know, the red states — or a lot of them are sick and dying.”