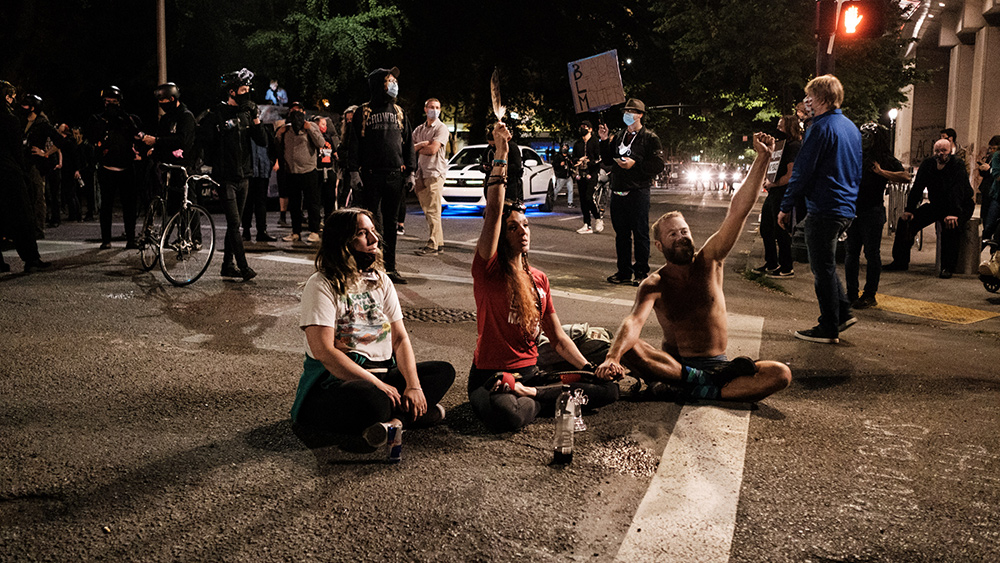 (Natural News)
A unit within the Portland Police Department known as the “Rapid Response Team” has voted unanimously to resign after one of its members was criminally indicted over his response to riots that occurred in the city back in August 2020.

Sources within the police bureau told The Post Millennial that they are not okay with Officer Corey Budworth being indicted and charged with one count of fourth degree assault for merely doing his job in responding to the civil unrest, demonstrations and riots that occurred in Portland.

Multnomah District Attorney Mike Schmidt’s revealed earlier in the week that Budworth’s charge is a misdemeanor.

According to reports, Budworth and the Rapid Response Team had responded to a call on the night of Aug. 18, 2020. Antifa militants were throwing Molotov cocktails into the County Sheriff’s Department Headquarters, and the unit merely attempted to stop them.

“My office will continue to do everything we can to ensure justice is done without error or delay and that we make sure our work and practices are rooted in fairness and equity.”

Portland has politicized policing, and the future looks bleak

Budworth apparently struck Teri Jacobs, an activist photographer and one of the rioters present during the melee, with a baton. Video footage posted to social media shows Budworth hitting Jacobs in the head from behind with it, then again as she fell to the ground.

Related footage shows other officers in the unit tackling and arresting people, as well as pepper spraying them. Some of the individuals appear to be engaging in violence while others are only shown protesting.

Dealing with a situation like that is difficult and complex, and it would be far too simplistic to just blame the cops for being unreasonably “brutal” without knowing the details leading up to the incidents that were captured on tape.

Because of this, it is simply unfair to blame Budworth of wrongdoing, some say, when he was merely doing his job. This is why the unit has decided to stand with him by stepping down entirely, at least until the situation is no longer politicized.

“Unfortunately, this decorated public servant has been caught in the crossfire of agenda-driven city leaders and a politicized criminal justice system,” the police union indicated in a statement, describing Jacobs as a “criminal rioter.”

To indict Budworth for dealing with her under the guise of holding police “accountable” is frivolous, in a sense, and demonstrates Portland’s continued antagonism against law enforcement.

“So, what typically happens, is the riot team gets called out to be prepared for a huge protest,” sources told The Millennial Post.

“Then patrol officers from all three precincts are on standby which gets activated when the protest starts. This means all patrol calls go to ‘priority calls only,’ basically only active assaults, shootings, and person crimes only get responded to. All other calls hold indefinitely until the protest is over or the next day.”

Without a riot team, Portland Police say they have “no clue what’s going to happen,” seeing as how Portland continues to remain a hotbed of violence.

“We don’t have enough patrol officers to be pulled from the road to handle huge crowds,” one officer told the media. “We are only backups with no gear like the riot team has.”

As it turns out, there are massive protests scheduled for this upcoming weekend, and Portland now has no way to contain them should things spiral out of control as they usually do.

More related news about the collapse of society because of bad political policy can be found at Chaos.news.

Satanic Temple Opens ‘Religious’ Abortion Facility In Honor of Samuel Alito’s Mom
Hunter Leaves Out Key Reason Why John Paul Mac Isaac Obtained Contents of His Laptop in First Place
Trump’s Plan to End ‘Left-wing Gender Insanity’ Is One We Can All Get Behind
Taxpayer-Funded VOA Reporter Claims to KJP Droves Are Asking If America’s ‘A Racist Society’
College Board admits defeat at the hands of Ron DeSantis, and liberals are outraged: ‘A win for fascist intimidation’