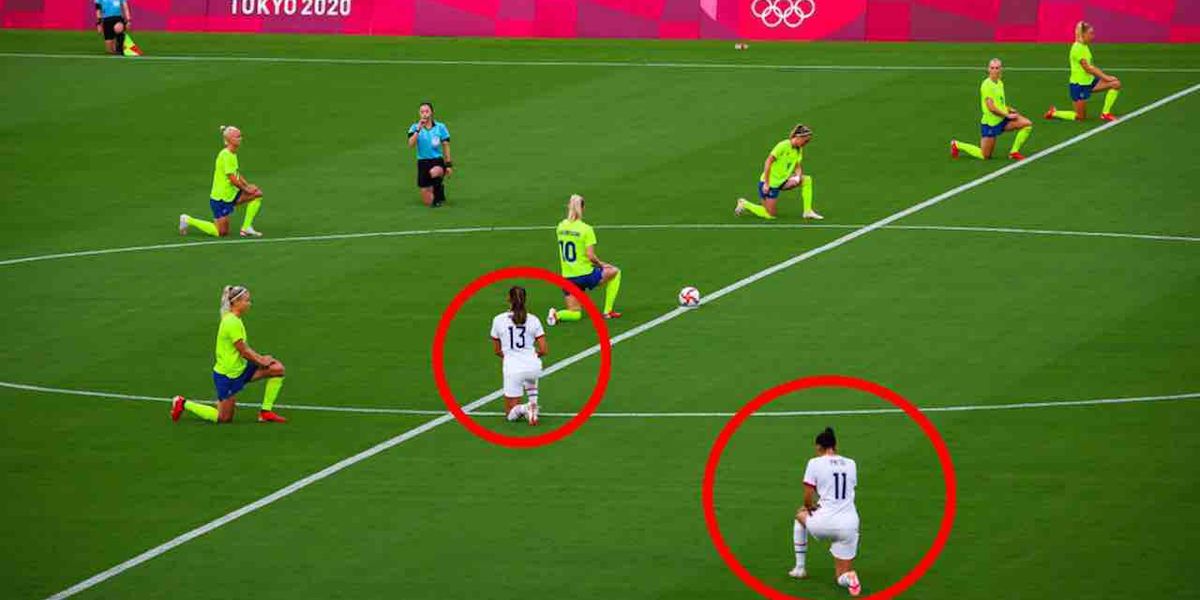 The United States women’s soccer team took a knee before its opening-round contest Wednesday against Sweden in the Tokyo Olympics, Yahoo Sports reported. Yet another woke protest from the dominant squad that’s become as widely known for its politics as for its skill on the field.

But Team USA went on to lose 3-0 to Sweden — its first defeat since January 2019. ESPN said the American players looked “confused” and “rattled.”

More from the sports network:

To say the reigning Women’s World Cup champions arrived in Japan as a favorite is perhaps an understatement. The U.S. has reached the gold-medal match in five of the six Olympics Games since women’s soccer became an event, and unlike some of the teams in Tokyo, the USWNT has played warm-up games for the months leading up to this amid the pandemic.

But the defeat was also notable because of just how bad the loss was. Confused expressions abound as players, including [midfielder Rose] Lavelle, looked for an open American to pass the ball to but couldn’t find anyone. As Sweden swarmed, pressing and bossing the midfield, the Americans looked rattled and gave the ball away too cheaply.

“It felt like there were holes everywhere defensively,” striker Alex Morgan said, according to ESPN. “I didn’t feel like we were pressing together, and then when we were on the attack and we’d lose the ball, we didn’t have the numbers around the ball to win it back.”

US women upset by Sweden 3-0 in first soccer match of 2021 Olympics https://t.co/bLuB8FR4lm https://t.co/jxg5miYoVj

What are the details about the pre-game kneeling?

It wasn’t as if Team USA was alone in its kneeling protest. The Swedish players all took a knee, too — as did a referee, Yahoo Sports said.

“They stayed there for about 10 seconds with pregame music still playing in the background,” the outlet noted. “They then rose, and a short in-stadium countdown to kickoff commenced.”

Yahoo Sports said the “demonstrations were pre-planned, as they have been before various international soccer matches for over a year now as collective statements against racism and other forms of discrimination.”

It was far from the first time Team USA took a knee. And the squad’s most prominent player — the uber-woke Megan Rapinoe — began making a name for herself after kneeling for the national anthem a la Colin Kaepernick.

Yahoo Sports added that all 18 USWNT players stood for the anthem Wednesday, adding that it’s “unclear if a protest during the anthem would be acceptable under the new IOC rules. (National anthems aren’t played before many Olympic events — only afterward, during medal ceremonies.)”

While protests during competitions and medal ceremonies are still prohibited, the outlet said related rules have been relaxed in the run up to the Tokyo Games.

The infamous Rule 50 had long prohibited athletes from … engaging in most forms of protest at Olympic events. In January 2020, the IOC specifically barred kneeling and fist-raising, among other acts, at all Olympic venues, at any point before, during or after a competition.

But pressure from athletes who felt the rules infringed upon their freedom of expression — and especially from black athletes, some of whom felt targeted by the guidelines — increased beginning last June. The U.S. Olympic and Paralympic Committee’s Athletes Advisory Council called for an abolishment of Rule 50 last summer. The USOPC, after forming a racial and social justice council, followed in calling on the IOC to “end the prohibition of peaceful demonstrations” at the Games.

In response, the IOC staged a lengthy review of the rule. It initially announced that it would, effectively, maintain the restrictions. But athletes, such as U.S. hammer thrower Gwen Berry, said the rules wouldn’t stop them from protesting racial injustice. The IOC essentially sought a compromise, and announced in early July that demonstrations before competitions would be allowed.

Other protesting teams included Great Britain and Chile, as players from both teams took a knee before their Wednesday game, the outlet reported. In addition, New Zealand players also took a knee while Australian players “stood with their arms around one another at the center circle, after earlier posing with the Australian Aboriginal Flag,” Yahoo Sports added.

Senate Democratic Whip Claims Demographics ‘Are Not on the Side of’ GOP
Cleveland Indians to become Cleveland Guardians after racism outcries — but one outspoken former major leaguer blasts name change as ‘lack of balls’
Democracy Dies in Regulators’ Offices: The SEC, Regulatory Creep, ESG, and ‘Climate’
Deace: This energy and dedication are what we need – so that we don’t let America perish on our watch
Accusing DeSantis of Spreading Disinformation, Cuomo Spreads His Own Disinformation