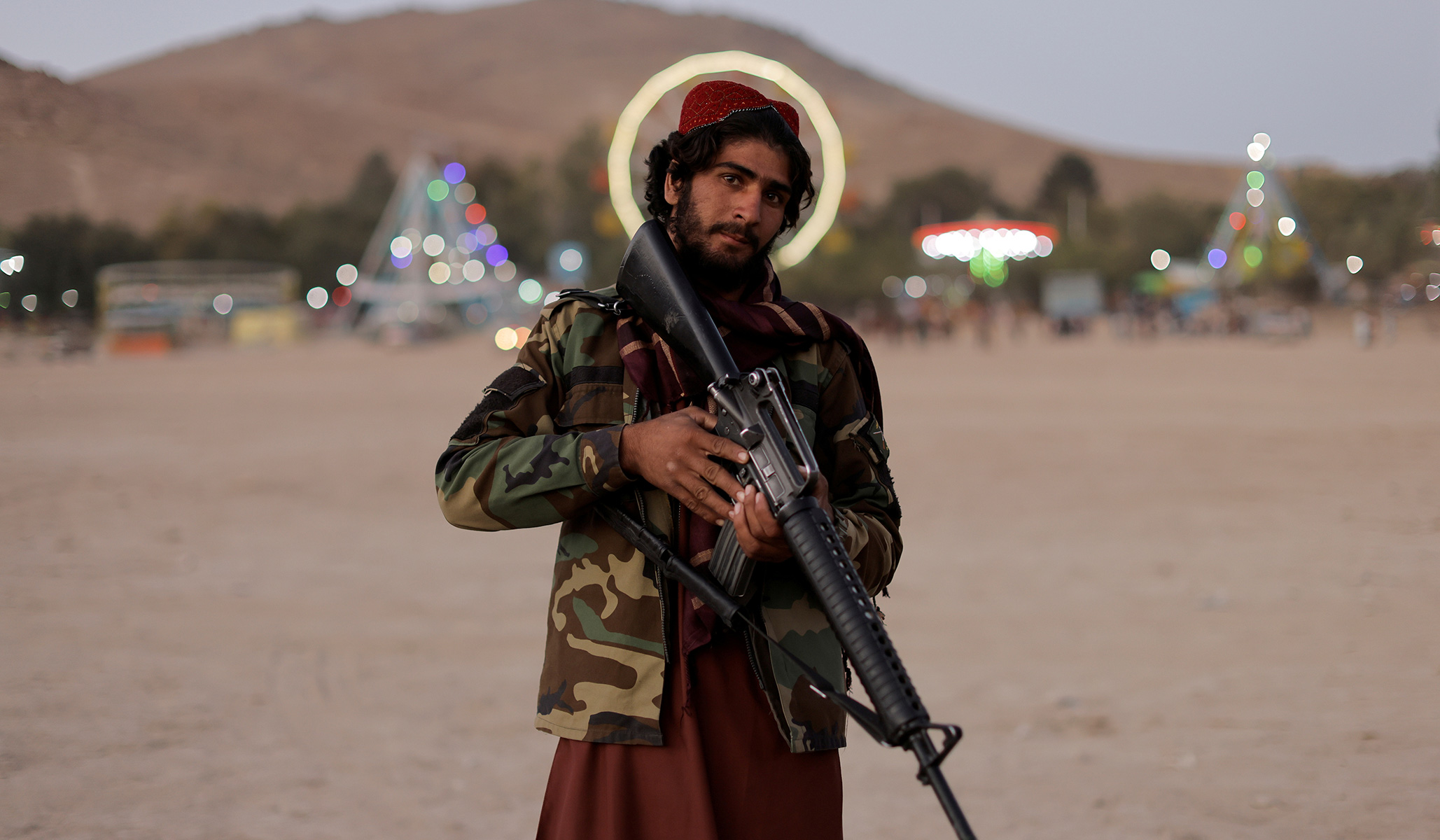 On the menu today: The U.S. State Department insists that the Taliban’s conduct is different now than it was a month ago; White House chief of staff Ron Klain wants to assure you that thanks to the Biden administration, you have high-class problems; a lesson on how salaries get set; and the video guys at Ricochet outdo themselves after yesterday’s William Shatner-heavy Three Martin Lunch podcast.

U.S. State Department: The Taliban’s Conduct Is Different Now Than It Was a Month Ago

This past weekend, Taliban political spokesman Suhail Shaheen told the Associated Press that there would be no cooperation with the U.S. government or its allies on containing the increasingly active ISIS terrorist group in Afghanistan. “We are able to tackle Daesh independently,” Shaheen declared.

This was something of an embarrassment for the administration, as Shaheen made his defiant announcement of noncooperation while U.S. representatives were meeting with senior Taliban officials in Doha, Qatar — and a representative of the U.S. Intelligence Community attended that meeting specifically to emphasize the importance of counterterrorism operations in Afghanistan.

Despite the Taliban’s public refusal to cooperate, after the meeting the State Department called the Taliban “candid and professional.” (Did you notice that Joe Biden and his administration speak much more harshly about unvaccinated Americans than about the Taliban?)

State Department spokesman Ned Price has one of the most difficult jobs in Washington, because his job is to regularly go in front of reporters and make the case that things aren’t as bad as they look, that the administration was completely prepared for that day’s bad news, and that all is well. (Imagine having to play the role of Kevin Bacon at the end of Animal House every day at your job.)

Tuesday afternoon, Price emphasized that the ongoing U.S. negotiations with the Taliban did not constitute recognition of the Taliban as the legitimate rulers of Afghanistan, and, perhaps most surprisingly, he contended that the Taliban had changed their conduct in the past month or so:

QUESTION: But it hasn’t — their conduct has not been great, to say the least, already. And everyone agrees that. Like, you said that openly — they say it diplomatically; it hasn’t been encouraging. So I don’t quite understand, like, what it is that you guys are waiting. Are you inclined to — you also recognize the need for cash, and they need cash, and you’re committing for humanitarian aid and a number of things. So are you inclined to unfreeze their reserves to allow them some cash or not?

MR PRICE: This is not a static picture. The Taliban conduct a month ago, six weeks ago, is in some ways different from Taliban conduct today. We want to see to it that six weeks from now, six months from now, when any future Afghan government is formally announced, that government upholds the commitments that the Taliban has made, and importantly that the United States together with our allies and partners have confirmed will be the basis for our approach, for our engagement to the Taliban.

I should note that yes, there was a senior delegation in Doha, a senior U.S. Government delegation in Doha. Today, there was a meeting of the U.S. and EU partners with the Taliban. There is a difference between pragmatic, practical engagement on core national interests — and to us, those national interests are counterterrorism, they are safe passage, they are human rights, among others — and any sort of recognition or conferral of legitimacy on the Taliban or any future government of Afghanistan.

In terms of Taliban conduct, there are areas that are woefully deficient, and we have made no bones about the fact that some of the actions that we have seen from the Taliban government, including when it comes to human rights, respect for all of Afghanistan’s citizens, some of that conduct is inconsistent with what the Taliban itself has pledged, what the international community has made clear it would like to see. We have made very clear where we stand on the composition of this caretaker government and what we would like to see in any future government of Afghanistan.

At the same time, we’ve also been very clear about our ability to safely facilitate the departure of many from Afghanistan. Just to give you the latest figures, as you know, there was another charter flight that departed from Kabul International Airport yesterday. In total, at least 129 U.S. citizens and 115 lawful permanent residents have departed Afghanistan with our assistance since August 31st. That includes charter flights, that includes overland routes as well. I also spoke to the fact that there are a couple thousand additional individuals who, since August 31st, have been able to depart. So we will continue to underscore the imperative of safe passage with the Taliban as one of those key metrics for judging our approach to any future government of Afghanistan going forward.

It is difficult to see or say how the Taliban are behaving differently now than they were a month or six weeks ago. Just this morning, CNN’s Nic Robertson reports that, “Despite soothing words, the Taliban are much as they were”:

As for the bright promises of August, there has been some “recalibration.” Taliban spokesman Zabiullah Mujahid told CNN: “We have not decided about women’s affairs or rights yet, but we are discussing.” Different transport and teaching arrangements were necessary, he said.

So complete was the Taliban’s military victory that they have little incentive to compromise, nor bargain with Afghanistan’s warlords. They have moved quickly to snuff out dissent, whether from social activists, rebels in the Panjshir valley or Salafists who practice Islam differently from the Taliban.

Nor is there any indication that the Taliban are less brutal or violent than before. Foreign Policy magazine confirms that, “The Taliban’s Sharia is the most brutal of all. The Afghan government is imposing punishments that have no comparison elsewhere in the Islamic world.” Summary executions, stoning of women, and beheading and cutting off the hands of accused thieves have returned; court cases and juries are no longer part of the legal system.

Women’s activists and journalists fear being tortured to death, according to NPR:

Atefa, who wants to use only her first name to protect her safety, used to write critically about the Taliban’s attitudes and treatment of women for various Afghan news outlets. Now she’s in hiding.

Ever since the group recaptured Herat in mid-August, her neighbors have been telling her the Taliban have been looking for her. In recent weeks, she’s received text messages from unknown numbers, containing grisly video clips. She presumes they’re from the Taliban, warning her of what’s to come.

“One recent video I got shows the Taliban torturing a man to death,” she says. “I am ready to be killed by a bullet, but I do not want to fall into the hands of the Taliban. I don’t want to be cut up into pieces.”

Amnesty International continues to collect testimonies from witnesses and victims of the Taliban’s reign of terror:

She received a letter from Taliban members earlier this year, and explained: “It said, ‘If the Taliban catch you, they will cut your ears off, and this will be a lesson for others in [your] province’. Now I am in hiding. Even my family thinks I am out of the country.”

Remember — these are the same guys that the State Department called “candid and professional.”

What’s more, there are some indications that the Taliban are attempting another form of blackmail against Western countries withholding financial assistance: “The Taliban has tried to up the pressure by threatening to allow out waves of Afghan migrants — who will probably head for Europe — if the money is not released.”

Elsewhere, Fox News reports that “The Biden administration is planning to allow some Afghan civil servants who were employed by the 1996-2001 Taliban government to be exempt from terror-related bans on entering the United States.”

As I have been emphasizing during this entire debacle, “The Biden Administration keeps assuring us that they have significant leverage over the Taliban, and yet they never seem to demonstrate any of it.”

White House chief of staff Ron Klain would like you to know that he concurs with economist Jason Furman’s assessment that: “Most of the economic problems we’re facing (inflation, supply chains, etc.) are high class problems. We wouldn’t have had them if the unemployment rate was still 10 percent.”

Great news, America! Your skyrocketing gas and grocery bills, and the fact that you can’t find all kinds of goods that used to be readily available, are “high class problems”!

Say, How Do Salaries for Particular Jobs Get Set, Anyway?

Sohrab Amari asks, “Why don’t we pay big-city truck drivers at least as much as surgeons? Seriously.”

My guess is that it has something to do with the difficulty of driving a truck in a big city — which is not easy! — and the difficulty of surgery, and how long it takes to learn and practice to be good at those particular jobs. It also has something to do with what shipping companies are willing to pay for someone to drive a truck within a big city, and what those companies’ customers are willing to pay for the goods that arrive via that truck.

For example, most people would say painting is not a particularly difficult task. But those who paint the George Washington Bridge in New York City made $71,000 per year back in 2012 — about $85,000 in today’s dollars. Of course, to do that, you have to be willing to hang suspended 600 feet in the air from a safety harness, high above the bridge and the Hudson River.

Back in 2012, Pat Foye, the executive director of the Port Authority of New York and New Jersey, said of those who apply for the job, “A large portion of them, when they get to this height, they determine there’s a better way for them to make a living.”

ADDENDUM: Oh wow. On yesterday’s Three Martini Lunch podcast, Greg Corombos and I talked about William Shatner going into space, that led to my Shatner impression . . . and the Ricochet graphics guys just took the ball and ran with it.