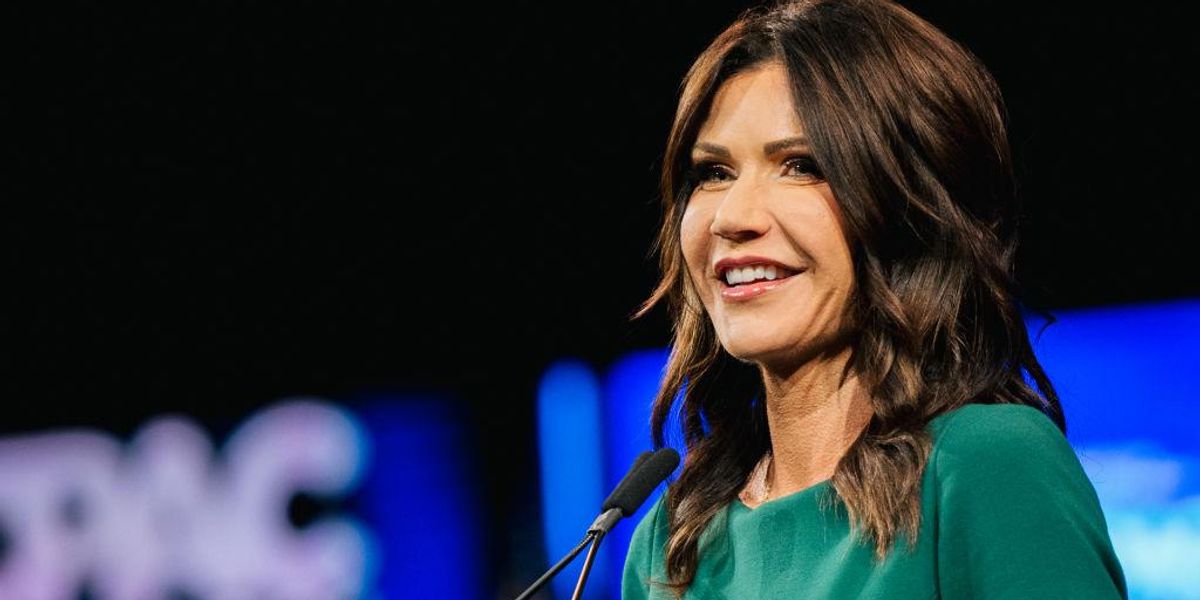 South Dakota Gov. Kristi Noem (R) on Friday announced two new bills to keep her promise to ensure that her state has the “strongest pro-life laws in the books.”

Timed to coincide with the March for Life in Washington, D.C., the first bill unveiled by the Republican governor would codify her executive order from last September restricting access to chemically induced abortions. Her order prohibited abortion pills (mifepristone and misoprostol) from being delivered via courier, telemedicine, or mail service and banned abortifacients from being dispensed or provided in schools or on state grounds. The governor’s office described “chemical abortions” as “a dangerous procedure that are four times more likely to cause the woman getting the abortion to end up in the emergency room.” Noem’s bill would make her executive order state law.

The second bill is a fetal heartbeat bill modeled after Texas’ Heartbeat Act, which prevents a woman from seeking an abortion after her unborn baby develops a heartbeat, usually sometime around six weeks.

“Every human life is unique and beautiful from the moment it is conceived. Every life is worthy of our protection, worthy of the right to live,” Noem said in a statement. “We hope that this year’s March for Life will be the last and that the Supreme Court will finally protect every unborn life. But until that comes to pass, these bills will ensure that both unborn children and their mothers are protected in South Dakota.”

Last year, Noem ordered the unborn child advocate in her office to examine South Dakota’s laws and make recommendations to strengthen them to protect unborn life.

Following the Supreme Courtu2019s decision to leave the pro-life TX law in place, I have directed the Unborn Child Advocate in my office to immediately review the new TX law and current South Dakota laws to make sure we have the strongest pro life laws on the books in SD.

Her action came after the Supreme Court rejected an emergency request to block the Texas Heartbeat Act from taking effect. Last week, the court rejected another legal challenge to the Texas law, sending the case to the 5th U.S. Circuit Court of Appeals, where it is expected to fail.

The draft South Dakota bill, “Prohibiting Abortion After Detection of Fetal Heartbeat,” is very similar to the Texas legislation. It would prohibit abortions after a fetal heartbeat is detected, except in cases where a physician believes that a medical emergency necessitates an abortion, an emergency would “prevent compliance” with parts of the law, or if an abortion is performed by someone “carrying out duties under federal law.”

The law uses the same innovative enforcement mechanism as the Texas law that’s been harshly criticized by pro-choice advocates: A physician, the woman seeking an abortion, or anyone involved who “aids or abets the performance or inducement of an abortion” can be targeted by a private civil action brought by any person “other than the state.”

An abortionist could face up to $10,000 in statutory damages for each abortion performed and additional damages for “emotional distress,” costs for legal counsel, and “injunctive relief” “sufficient to prevent the defendant from violating” the law again.

This unique and controversial provision of the law was designed to shield it from review by federal courts. The law’s critics claim that if this scheme were widely adopted for all sorts of laws — say gun control laws — constitutional protections for certain rights would be rendered meaningless.

In a Supreme Court decision permitting a lawsuit against the Texas law to proceed, Chief Justice John Roberts said, “Texas has employed an array of stratagems designed to shield its unconstitutional law from judicial review.”

Roberts condemned state lawmakers for attempting to “nullify this Court’s rulings,” declaring that “it is the role of the Supreme Court in our constitutional system that is at stake” in that case. His writing was interpreted to suggest that he may ultimately side with the court’s liberal justices in abortion cases, voting to uphold the long-standing Roe v. Wade decision that established a constitutional right for women to kill their unborn children.

Later this year, the Supreme Court will rule on a Mississippi law that bans most abortions after 15 weeks of pregnancy in a case that could potentially overturn Roe.

In remarks published Friday, Noem said that the total number of abortions in South Dakota has decreased “more than 80% over the last decade.” The governor thanked state legislators in both parties for supporting her bill to ban abortions of babies diagnosed with Down syndrome, as well as numerous other pro-life efforts.

“We respect life in South Dakota, and I look forward to the day when we protect all unborn lives,” Noem said. “Our laws must reflect our values and our commitment to protect the unalienable rights of all of our citizens.”

‘My God’: Dem senator leaves Interior secretary stumbling after confronting her with agency’s own statement​
Nets Melt Down Over Oklahoma Abortion Ban, Pending Roe Decision
WashPost Buries Robby Mook’s Hillary Collusion Bombshell on Page A8, Paragraph 25
Group of DOJ employees calls for federal employees to be offered administrative leave to travel for abortions
Elon Musk Says The Left Is ‘Brewing Attacks’ Against Him