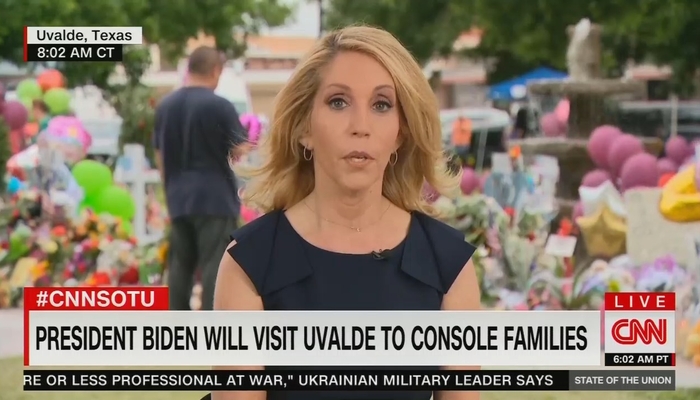 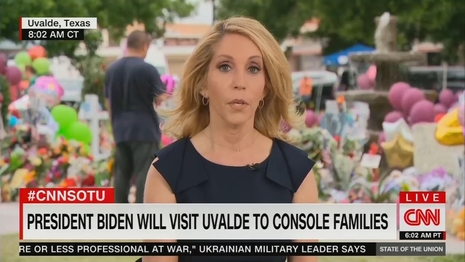 Katherine Huggins at Mediaite reported White House officials turned down requests from CBS, CNN, and Fox News and did not appear on any Sunday news show to discuss the mass school shooting in Uvalde, Texas.

On CNN’s State of the Union, host Dana Bash complained it was difficult to hope for change. “President Biden is on his way here to Uvalde this morning. He will try to comfort grieving families, as he’s done so many times before. Enough times that the political reality seems to have set in.”

She added “We asked for a White House official to join us to talk about solutions this morning, but no one was made available. The governor and lieutenant governor of Texas and the state’s two U.S. Senators also declined.”

CNN’s Dana Bash: “We asked for a White House official to join us to talk about solutions this morning, but no one was made available. The governor and lieutenant governor of Texas and the state’s two U.S. Senators also declined.” pic.twitter.com/uk5T5n3sss

On CBS, Face the Nation host Margaret Brennan noted “the White House did decline our invitation for a member of the administration to come on the show today, saying they were leaving it up to Congress to act.”

A spokesperson for Fox News told Mediaite that the White House turned down interview requests for Fox News Sunday as well.

On NBC, Meet the Press host Chuck Todd avoided any mention of being turned down by Team Biden, but underlined that “We asked each of the Senate’s 50 Republicans, every single one of them, to join us and none agreed on this weekend.” They would have received a heaping helping of Todd claiming the Second Amendment doesn’t exist.

“We can expect to hear more calls for thoughts and prayers and that’s it because this current version of the Republican Party is being held hostage by a vocal minority obsessed with an absolute right that does not exist” – @ChuckTodd #MTP. pic.twitter.com/JXRKhTpZ2S

Anyone who’s ever seen Todd yell at Republicans and call it an “interview” would understand why they would decline. (He gets especially mad when they say the media has a liberal tilt.)

Instead, Todd interviewed Sen. Cory Booker (D-N.J.) and Pat McCrory, a former GOP governor of North Carolina and a regular Meet the Press pundit. Todd’s toughest statement to Booker was this:

TODD: Look, neither one of these laws, the red flag law or this expanded background check, would have done anything. Both of these 18-year-olds legally purchased everything they used, including the massive amount of ammunition and body armor. It feels like you’re going to solve a problem that doesn’t address the problem.

Booker kept pushing his reforms, saying “this is not a one-move solution. There must be many things done.”

Previously rabid fans of Kamala Harris are losing faith: ‘Did I just make up a person in my head who could do those things?’
Screen Actors Guild Health Plan Offers Reimbursement For Abortion Travel Expenses
The Biggest Beneficiary of Biden’s Climate Plan Is China
CNN Pundits Admit: Liz Cheney’s Base Is ‘Democrats and the Beltway Media!’
FBI report concludes trigger was pulled on set of Alec Baldwin’s ‘Rust’