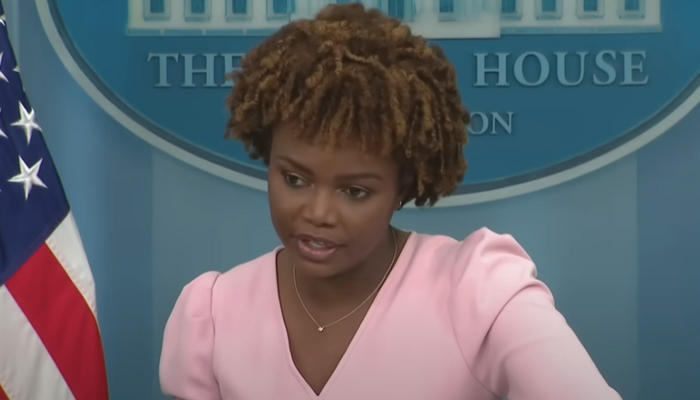 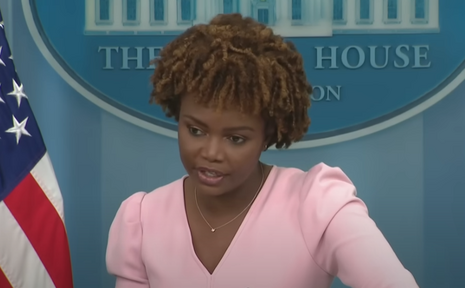 The reviews are in for the new White House press secretary, and it’s not good. Politico ran a story headlined “Karine Jean-Pierre’s tough debut: Unforced stumbles and press corps grumbles.”

Reporters Max Tani, Alex Thompson, and Allie Bice wrote “it’s been a rocky first month” for Jean-Pierre, so bad that she’s already “increasingly found herself sharing the podium or splitting briefings with John Kirby,” who appears to be a “co-press secretary.”

“Some black communications officials in and outside the administration” complained the White House “has set her up to fail” by having Kirby “hovering nearby and taking the lead on foreign policy.”

Worse yet, she’s become a GOP “punching bag,” and “her stumbles in several instances have made her appear underprepared — in moments quickly weaponized by the right.”

Anyone who tunes in the briefings can see it. She’s woefully under-prepared. She’s like the Kamala Harris of press secretaries. Being a pioneering example of diversity in hiring only takes you so far.

For example, President Biden (too typically) boasted to Naval Academy graduates at their commencement in May that “I was appointed to the Academy in 1965 by a senator who I was running against in 1972.” The New York Post found no evidence, but Politico could only describe it as “a claim met with skepticism.”

When questioned about this, Jean-Pierre replied “I didn’t hear that part of the speech.” It was the second sentence of his speech if you don’t count “Hello.”

The briefings are so bad and so devoid of news that attendance might suffer. “At a certain point it wouldn’t surprise me if people started voting with their feet,” one White House reporter said.

The White House press corps are a really grumbly bunch. Just two months before, Tani wrote a piece on reporters being upset at how boring and un-glamorous their beat had become. He called it “an adjustment at best and deflating at worst.” All the drama is gone in Biden’s liberal bubble.

“Jen [Psaki] is very good at her job, which is unfortunate,” said one anonymous reporter, “and the work is a lot less rewarding, because you’re no longer saving democracy from Sean Spicer and his Men’s Wearhouse suit. Jawing with Jen just makes you look like an a–hole.”

It’s clear that the “objective” White House press corps strangely misses the days of Trump, when they could be praised as bold defenders of democracy. Now, all these Biden voters don’t really relish being an “a–hole” and asking challenging questions at the risk of angry tweets from leftists comparing them to those dastardly Fox News questioners like Peter Doocy.

The network bosses have no interest in displaying clips of their correspondents sparring with a Democrat press secretary, as they did under Trump. All we can expect is anodyne press-secretary talking points. For example, when President Biden prepared for a prime-time speech on gun control on June 2, CBS gave us this little Jean-Pierre clip: “Tonight’s speech is going to focus on what Congress needs to do and Congress’s action, because the president cannot do this alone.”

Biden’s approval rating is dreadful, and there appears to be nothing the new press secretary or her unsatisfied press corps can do about it.