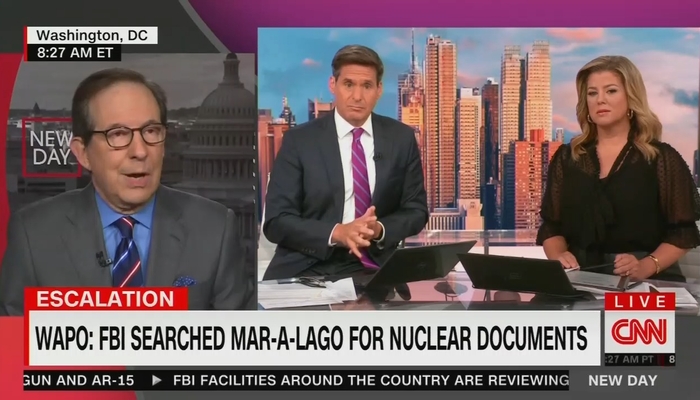 Pam Key at Breitbart noticed on Friday’s New Day, CNN anchor Chris Wallace said Republicans characterizing the FBI’s action at Mar-a-Lago as a “huge” “Gestapo” tactic is “out of touch with reality.” The FBI should not be compared to the Nazis. CNN and their Democrat friends save that for Republicans. Liberal media reaction to the FBI raid has focused heavily on neo-Nazi and racist message boards as the stand-ins for Trump voters.

But we know that if Trump’s FBI raided a Clinton house, the metaphors of tyranny would be free-flowing. CNN focused on the assertion that Republicans weren’t condemning the violent nut who attacked the FBI field office in Cincinnati. That condemnation should be easy and obvious.  Wallace wisecracked “you know, the thing that was, to quote Simon and Garfunkel, ‘The Sound of Silence.’ You heard precious little condemnation from people on the right.”

BERMAN: You know, attorney general, former Attorney General Alberto Gonzales was earlier and said the same thing. He said, where are the Republicans? At this morning saying, you know, no violence, saying this is wrong, saying what happened in Cincinnati was wrong. He, too, was stunned by the silence there.

WALLACE: Well, I mean, again, we’re talking about a party that is, has hit Democrats for not supporting, backing the blue, for not supporting law enforcement. Here we have people doing their job. And, you know, let’s make it clear again, this was not a raid. This was a very carefully-vetted search. They went to a judge. They got a search warrant. They went in. They apparently had notified the Secret Service at least an hour ahead of time. They specifically, reportedly, were concerned to do it when the former president was not on the premises, and went in and did it. They basically did it by the book. You can argue as to whether they should have done it at all, but they did it by the book. And the idea that this is being seen as some huge, and the word has literally been used, Gestapo tactic by the FBI is just so out of touch with the reality of what happened.

KEILAR: Yeah. And they’re playing with fire when they’re talking about this. We see that happening yesterday.

But CNN didn’t mind the Nazi/Gestapo talk when it’s applied to the government under Trump.

— In 2020, CNN’s New Day crew sat by as Rep. Jim Clyburn said of federal law enforcement during the Portland riots: That kind of activity is the activity of a police state, and this President, and this Attorney General seem to be doing everything they possibly can to impose Gestapo activities in local communities.”

— In 2018, CNN’s Twitter account demonized Immigration and Customs Enforcement (ICE) officials as comparable to the Nazis. In a March 14 tweet, CNN touted their own report of a Jewish woman taking in illegal immigrants, “driven by thoughts of the Holocaust.” On air, CNN’s Erin Burnett asked if she heard “the echoes of history.”

Then of course, there’s comparing Fox News owner Rupert Murdoch to the Nazis, as CNN host Fareed Zakaria did in 2021. But he may have been plagiarizing from someone else.