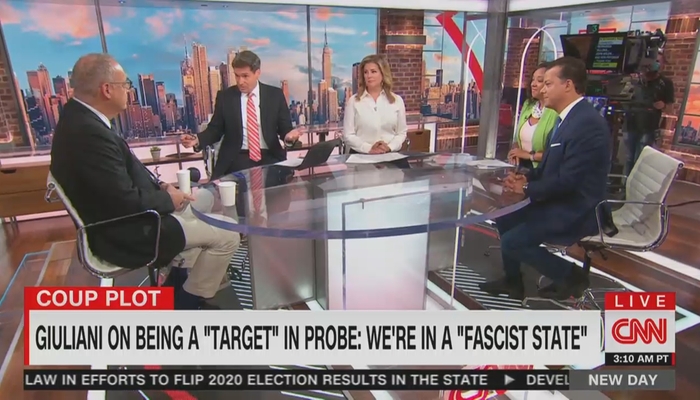 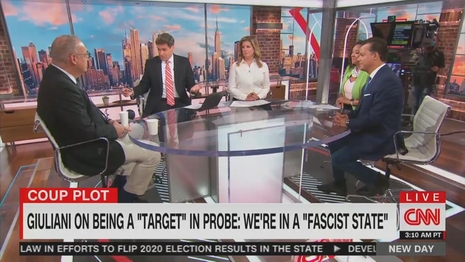 Two of Rudy Giuliani’s former aides turned on him with a vengeance on CNN’s New Day on Tuesday morning.

First up, former Rudy spokesman Ken Frydman. Commenting on Rudy being made a prosecution target by Democrat District Attorney Fani Willis in Fulton County, Georgia, Frydman said that “He knows he lied to legislators. He knows that he concocted this false elector scheme. He knows he lied for his client. And he knows we all know.”

He said Rudy’s strategy is to “delay, delay, delay,” and “At this point in his life, his goal is to die a free man.” Even co-host John Berman was a bit taken aback, saying, “that’s pretty stark.”

So now “the walls are closing in” on Rudy. How has this spin turned out before?

Next up was CNN analyst John Avlon, a former Giuliani speechwriter, back when Rudy was a liberal Republican. He gave a more-in-sorrow-than-anger spiel about “the tragedy of his trajectory. But it’s a self-inflicted tragedy. “

The segment had begun with a clip of Rudy saying that his potential prosecution would be the mark of a “fascist state.” Avlon said: “to throw around terms like fascist state is beneath the man he was, and the credibility he once had.”

Gag me with a subpoena! If there’s anyone throwing around “fascist” nowadays, it’s the liberal media. Take Joe Scarborough over at MSNBC, who’s made a virtual cottage industry out of dropping the f-word to condemn Trump and his supporters. Examples here, here, and here of Scarborough riding his “fascist” hobbyhorse into the ground.

Finally, defense lawyer Bernarda Villalona piled on, taunting: “Rudy Giuliani, you can run but you can’t hide. Your time is up.”

Funny how, when it comes to discussing Trump and his allies, “defense” attorneys on liberal networks turn into pitbull prosecutors!

JOHN BERMAN: This morning, Rudy Giuliani is making his first public comments since learning that he is the target of a 2020 election investigation in Georgia.

RUDY GIULIANI: It’s just a further desecration of the Sixth Amendment. I was his lawyer of record in that case. The statements that I made are either attorney/client privileged, because they were between me and him. Or, they were being made on his behalf, in order to defend him. When you start turning around lawyers into defendants when they’re defending their client, we’re starting to live in a fascist state.

BERMAN: Giuliani has been ordered by an Atlanta-area judge to appear I in person in front of a special grand jury tomorrow.

NICK VALENCIA: Good morning, John. And despite his best efforts, Rudy Giuliani was trying to delay his testimony because of health concerns. He will now have to appear before that special-purpose grand jury, but he will be doing so as a target of Fani Willis’s criminal investigation.

BERMAN: Ken, I want to start with you, as someone who worked for Rudy Giuliani. John did also, but you were Rudy Giuliani’s press secretary. The target, now, of this investigation. That’s a big deal.

KEN FRYDMAN: It is a big deal. And he’s trying to create a smoke screen and delay as long as possible. Listen, Rudy flew too close to the sun, he got too close to Trump, he got burned. He knows how the DOJ works . . . I know he’s nervous. He could have flown to Georgia. You know, he flies all over the world. So, that’s just a typical tactic to try to postpone the inevitable.

BERMAN: Why do you think he’s nervous about this Georgia investigation?

BRIANNA KEILAR: What’s his next move?

FRYDMAN: Delay, delay, delay. Kick the can down the road. You know, at this point in his life, his goal is to die a free man.

JOHN AVLON: That is stark. And, look, it highlights, I think, the tragedy of his trajectory. But it’s a self-inflicted tragedy.

The deal is that Rudy was, as Ken knows, was really one of the most respected legal minds of his generation. I remember him telling many times, the law is about the search for the truth. And that is not what he is, is pursuing right now. He’s trying to evade the truth, because he’s afraid of what will come up. Now he is saying, look, I was acting as in the capacity as lawyer. And whether the ex-president ultimately throws him under the bus is yet to be seen.

But I will also say, Rudy Giuliani is someone who said many times, on tape, from the Blue Room at City Hall, that you respect the sanctity of a grand jury. They know more than we do. And so, to push back against that as aggressively as he has, and to throw around terms like fascist state, is beneath the man he was, and the credibility he once had.

BERNARDA VILLALONA:  Exactly. So, Rudy Giuliani, you can run but you can’t hide. Your time is up.

Are Democrats Rooting for Massive Loss of Life in Florida?
Americans shun fake meat due to high prices and its link to “wokeism”
Sorry, Boy Scouts—or Whatever You’re Calling Yourself These Days. I Refuse to Support Your Fundraisers Anymore.
The Left’s Flirtation With Homophobia
Whoopi Pushes for Splitting the Republican Party, Which Helps Dems