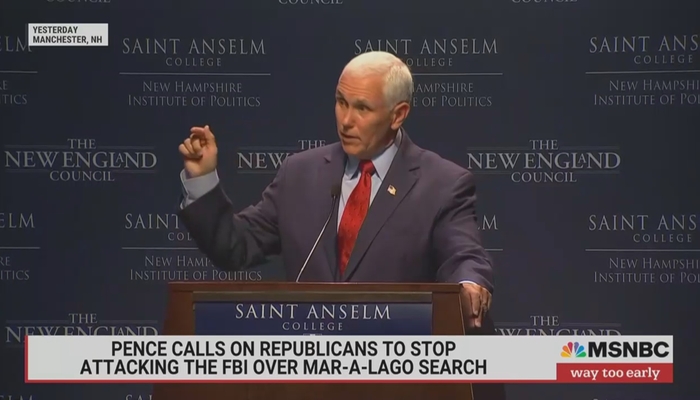 “The Republican party is the party of law and order. Our party stands with the men and women who serve on the thin blue line at the federal, state and local level. These attacks on the FBI must stop. Calls to defund the FBI are just as wrong as calls to defund the police.”

You’d think Morning Joe would give Pence unqualified plaudits for his statement. But no! On Morning Joe, the unadulterated praise of a conservative Republican is strictly verboten!

And so, Willie Geist, despite being the most equitable member of the Morning Joe crew, found something to denounce, saying: 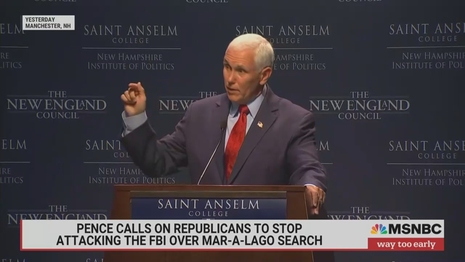 “He said we should question the Justice Department. So he’s not completely clean on this. Because he doesn’t like the raid.”

So, in the august view of Morning Joe, if you dare question the Justice Department. If you don’t “like the raid” on Mar-a-Lago, you’re not “completely clean,” or in other words, partly dirty.

Remember when the liberal media went into paroxysms of rage when Trump adviser Stephen Miller said that Trump’s national security decisions “will not be questioned”?

So, questioning a presidential administration’s decisions was wonderful back when Trump was in office. Indeed, saying such decisions should not be questioned was the sign of an “authoritarian.”

But that was then. Now, questioning a decision by an arm of the Biden administration renders you “not completely clean.” Gotcha!

On Morning Joe, Willie Geist dismissing Pence was sponsored in part by Discover, and GlaxoSmithKline maker of Shingrix.

MIKE PENCE: I also want to remind my fellow Republicans, we can hold the attorney general accountable for the decision that he made, without attacking the rank-and-file law enforcement personnel at the FBI.

The Republican party is the party of law and order. Our party stands with the men and women who serve on the thin blue line at the federal, and state, and local level. And these attacks on the FBI must stop. Calls to defund the FBI are just as wrong as calls to defund the police.

JOE SCARBOROUGH: I’m curious, what did you think of Mike Pence’s speech?

MIKA: It feels — it feels like he’s looking for a lane. I believe his speech, Willie, if I’m not correct, was in New Hampshire, was it not?

WILLIE GEIST: It was. Yes, it was.

MIKA: [Chuckles] That would be, that would be kind of the, I think, the real story there, is, what’s he doing there? And there’s obviously, maybe, a long game being played here. I don’t want to get ahead of anything.

GEIST: Obviously, we know what the climate is right now. We know that people are prone to violence, they’re open to it, see January 6th. And to put that out [theories such as that of armed IRS agents coming for small businesses] is beyond irresponsible.

And as for Mike Pence, Joe, it is such a statement, and such a commentary, and such an indictment on the state of the Republican party, that it’s even noteworthy that the former Vice President of the United States has to come out and say, “hey, leadership of the Republican party, let’s stop attacking the FBI and threatening them. We just had a guy shoot up the Cincinnati field office with a nail gun and had an AR-15. Let’s stop doing that.”

Now, he said, “look, sure, we should question the Justice Department.” So he’s not completely clean on this, because he doesn’t like the raid. But, he is at least having to go out and say, “let’s stop attacking the FBI. That’s a bad idea.”

GEIST: And Mika, they believe that that is something that has to be said! Which is, as I said, an indictment of the party right now.

Report: Biden’s student debt forgiveness expected to cost over $400 billion, roughly twice the White House’s estimate
As menacing storm approaches Florida, Rachel Vindman tweets, ‘We should use they/them pronouns for hurricane Ian to annoy DeSantis’
When the Washington Post Breaks Out ‘Both-Sidesism’ — Victims of Communism Museum!!
Think the Pro-Transgender Crowd Is in the Majority? Guess Again
NPR Roots Against the NFL, Like It’s a Uniquely American Sickness