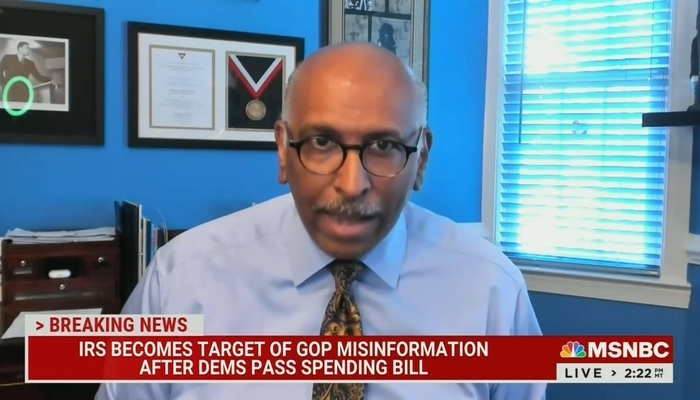 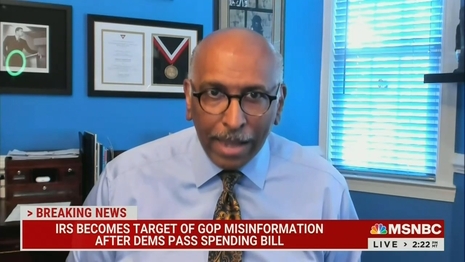 This was a segment on alleged “misinformation.” The screen graphic was “IRS becomes target of GOP misinformation after Dems pass spending bill.” They used a (very brief) clip of the Iowa senator on Fox & Friends on August 11 wondering if the IRS was going to have a “strike force” carrying “AK-15s” [sic].

They did not provide the context that the IRS put out an employment notice for agents playing up they should be fit enough to respond in “life-threatening situations” and “Carry a firearm and be willing to use deadly force, if necessary.” The IRS did take that thing down after it caused a ruckus.

This was a ”Republicans have a deadly Trump infection” moment.

JOHN HEILEMANN: I ask you, Michael Steele, was there a time in my adult lifetime when Democratic kids coming out of my Northwestern University who went to work as summer interns in Chuck Grassley’s office and he was seen as a moderate Republican. Now he’s gotten more conservative over time. That’s not conservative. That’s someone who has been — that’s Invasion of the Body Snatchers.

Chuck Grassley basically saying — painting a picture of IRS agents with automatic weapons looking for people who have pass-through income and brandishing them in strike-force fashion. It’s like crazy conspiracy theory, paranoia run amok. What happened to Chuck Grassley, and by extension to all of the people who used to be like Chuck Grassley in the Republican party who now talk this way?

MICHAEL STEELE: I liken it to an infection. An infection that could have been stemmed back in 2016 on that stage where 15 Republicans stood next to Donald Trump and refused to shut him down, refused to cauterize the wound he was beginning to open.

Instead, they again saw value to that moment, in two ways. One, we can control this guy because he doesn’t know what he’s talking about, and two, the base. The base is feeding off of it gets ‘em stirred up, and we want them to turn out. Chuck Grassley, even though he’s stepping down and going on is still now infected by that particular aspect of Republicanism.

Does Steele honestly feel none of Trump’s Republican opponents tried to argue with him on the debate stage? If there was an actual Republican on the set, they could joke that Steele’s MSNBC buddies Joe and Mika Scarborough were much more encouraging to Donald Trump and refusing to “cauterize his wound.” Most of the media promoted Trump heavily, because that’s who Team Hillary thought would be easy to beat.

Morning Joe also attacked Grassley on this Fox clip. Steele concluded “Chuck Grassley knows damn well the IRS is not armed with AR-15s coming to someone’s small business. He knows that! But there is no upside in being honest about it.”

Michael Steele’s latest Democrat echoes about GOP “infections” were brought to you in part by ClearChoice dental implants.