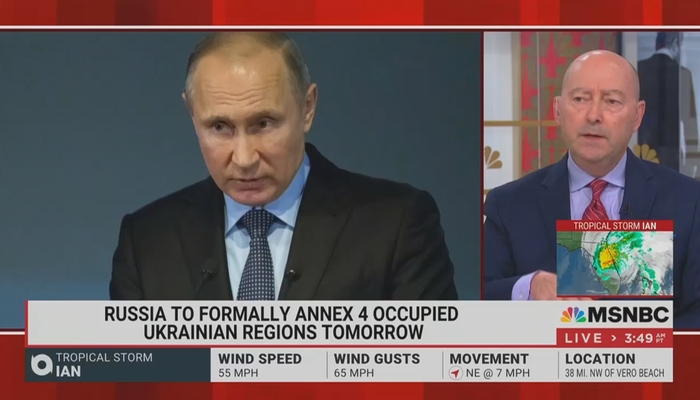 On a morning of concern for those affected by Hurricane Ian, a lighter moment from today’s Morning Joe.

Retired Admiral and NBC security analyst James Stavridis,was underlining how badly it’s going in Ukraine for Russia’s “failing, flailing military” and that includes any new “recruits” Putin is involuntarily grabbing off the streets. Commenting on Putin’s chaotic call-up of 300,000 conscripts, Stavridis came up with a truly strange metaphor, saying:

“This is like pulling a bunch of bartenders off of Fifth Avenue, and sending them out to the front lines. It’s not going to work.”

“I know a lot of those bartenders. You want those men and women on the front lines. Trust me.”

Having been in an NYC bar or two during my lawyer days there, I’m with Willie.

And come to think of it, bartenders should make good soldiers. After all, they are experts when it comes to . . . shots!

On Morning Joe, NBC security analyst and retired Admiral James Stavridis comparing Putin’s conscripts to “a bunch of bartenders pulled off of 5th Avenue” was sponsored in part by Tide, Subway, Abbott, maker of Rinvoq, and Meta/Facebook.

JONATHAN LEMIRE: I wanted to ask: you mentioned the mobilization, 300,000 reservists being called up. But we’re seeing images of protests, men refusing to go, thronging towards the border, hopping on airplanes to get out of the country. Even committing acts of violence at some military recruitment centers because they don’t want to go.

What does that tell you right now about the state of the Russian military, and how much longer Putin can keep this offensive going?

JAMES STAVRIDIS: First and foremost, Jonathan, we can look at this and see a military that doesn’t work. And we know that from seven months ago, when they tried to invade and they couldn’t put together simple logistics, combined arms operations, the ability to keep their soldiers warm and secure and fed on the front lines, let alone supplied with ammunition.

That is NOT what is happening in Russia. This is like pulling a bunch of bartenders off of 5th Avenue and sending them out to the front lines. It’s not going to work.

And it’s going to only provide more fatalities and grievous wounds to these individuals. So, I think Putin has his hands full, not only in a failing effort in Ukraine but also in his own nation.

WILLIE GEIST: I know a lot of those bartenders. You want those men and women on the front lines. Trust me. [Stavridis heard chuckling off-camera.]

According to Elon Musk, Apple CEO Tim Cook says the company never considered yanking Twitter from the App Store
‘Bad ass black trans’ activist fired from own LGBTQ center for allegedly diverting funds to ‘unknown’ bank accounts
‘We can no longer say this is a pandemic of the unvaccinated’: CDC data indicates vaccinated, boosted people together make up majority of COVID-19 deaths
A Wiener Without a Clue
Univision, Telemundo Barely Covered Biden Deal For Venezuelan Oil