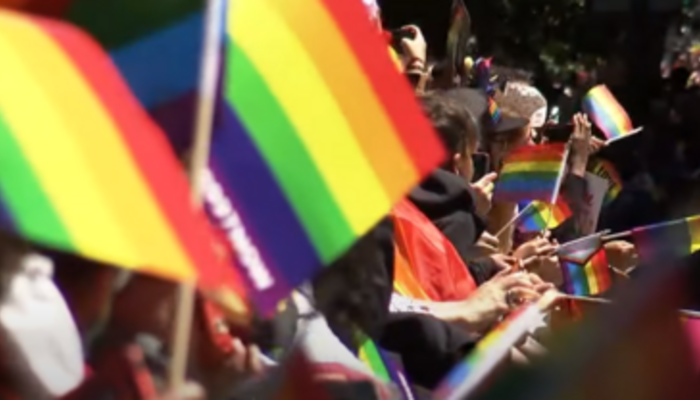 For centuries, nothing has said “traditional Christmas” like twerking drag queens and Pride parades. Think of all those Currier and Ives lithographs of horse-drawn sleighs driven by guys in leather speedos, the Rockwell paintings of Santa dancing suggestively in a low-cut cocktail dress. Not to mention “Don we now our gay apparel.”

But, according to The Washington Post, in one small Texas town, some killjoy conservative Christians suggested that the Christmas parade was no place for a Pride float with dancing drag queens, complaining about a tradition that stretches all the way back to 2021.

The upshot is that the town of Taylor decided to have two Christmas parades: one for the crazy Christians and one for people who appreciate the traditional bump n’ grind. Call it Doomers versus Groomers.

One of these things is not like the others … never mind. The point is that the Christians really don’t want dudes in women’s clothes at their kids parade.

The Post sees this as part of a larger – darker –  trend:

Last month, a Texas lawmaker introduced legislation to criminally charge those who host drag shows that allow minors, part of a slate of proposed laws targeting LGBTQ Texans ahead of the legislative session in January.

Again, “targeting.” Just like conservatives with guns target people in gay bars. You knew that was coming. This is the Washington Post, after all, and an article about pushback to the alphabet soup agenda wouldn’t be complete without repeated reference to the menace of violence.

So the president of the local Pride group is quoted as saying: that the Christians who don’t want banana hammocks with their mistletoe have “become a hate group. And we saw what happened with that … in Colorado.”

And the article quotes a social media post stating, “You don’t get to decide who celebrates Christmas. You are creating an environment of hate and fear, that is what leads men to commit mass murders.”

The Post notes that “Instead of quelling debate, the dueling parades divided Taylor, sparking a war on words online that grew even more pointed in the aftermath of the November attack on an LGBTQ club in Colorado Springs.”

That’s the narrative from the Post: Conservatives “target,” and daring to say you’re not dreaming of a pink Christmas is hate, and the LGBTQ and sometimes Y crowd is always a social media post away from being killed by rednecks and shut up bigot!

Telemundo’s “Con-Law Expert”: Pence Doc Find Is “Christmas” For Trump
CNN’s Bash Asks Schiff, Swalwell & Omar About Their Lies & Chinese Ties
Tech tycoon, 45, reportedly spends $2 million a year on his extreme anti-aging regimen. His goal? To achieve the body, inside and out, of an 18-year-old.
Poll finds almost a quarter of Millennials get their rent paid by their parents, others get groceries, utilities paid
Tucker Carlson Calls Out Antifa Protests As Coordinated, Political Propaganda (VIDEO)