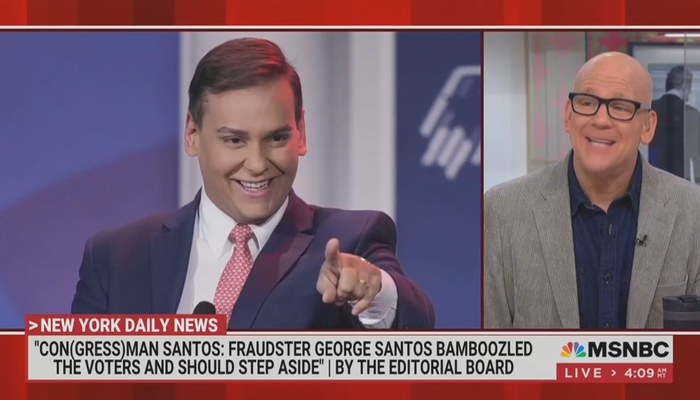 MSNBC’s Morning Joe delighted on Tuesday in the case of Republican Congressman-elect George Santos, who’s now admitted telling a series of fraudulent tales about his biography to get elected in the Third District on Long Island.

That’s shameless, and the voters have every right to be angry and want him to resign. But if multiple lies about one’s background are cause for a politician to resign, when will Democrats and the liberal media be demanding that Joe Biden quit, and how soon should we expect Ol’ Joe to announce his departure from the White House?

Let’s take a walk down the long Memory Lane of some of Biden’s lies, shall we? Among other prevarications, Biden: 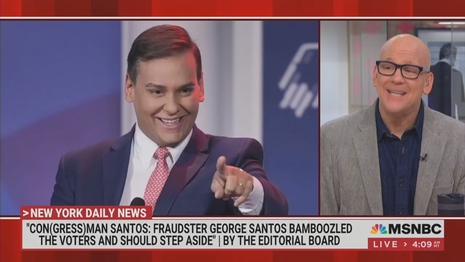 And the show highlighted a New York Daily News editorial calling on Santos to “step aside,” adding “if Santos has any shred of decency he’ll step aside now that his con has been exposed, even as some of his voters are standing behind him. We’re not holding our breath.”

As documented above, Joe Biden has told a multitude of lies about his background. But naturally, Morning Joe never made mention of Biden’s history of lying—let alone suggest that he should resign. There were “lying liars” who are typical in myth-making, and then there’s Santos.

To the contrary, the panel chatted about Biden’s “playbook” of exposing Republicans, and Lemire said the Santos story “certainly feels like the further Trumpification of the Republican Party.”

Morning Joe gleefully leading with the story of Republican Congressman-elect George Santos’s many lies, and highlighting a newspaper editorial calling on him to resign, but never mentioning Biden’s history of lying, was sponsored in part by Liberty Mutual and Booking.com

JONATHAN LEMIRE: We don’t want to wait another moment before diving into our first story. Congressman-elect George Santos, admitting that he lied about several key details in his experience and biography.

In an interview with the New York Post, Santos confessed to what he called “embellishing” his resumé, but insists he will serve in the next Congress.

Santos confessed he had never worked directly for Goldman Sachs and Citi Group, chalking that fib up to a, quote, “poor choice of words.” He also admitted that he never graduated from any college, despite previously claiming to have received a degree from Baruch back in 2010. Quote, “I didn’t graduate from any institution of higher learning. I’m embarrassed and sorry for having embellished my resumé. I own up to that. We do stupid things in life.”

Santos was also accused of lying about his family history, saying on his campaign website that his mother was Jewish and his grandparents escaped the Nazis during World War II. “I never claimed to be Jewish,” Santos said, “I am Catholic. Because I learned my maternal family had a Jewish background, I said I was Jew-ish.”

John Heilemann, have we reached a new low?

JOHN HEILEMANN: A new low? No! I think what we were talking about just a second ago, talking about the Biden White House’s strategy of contrasting against Donald Trump, and deciding that it would be a good idea to say that, hey, when he hangs out with neo-Nazis we should say we’re against Nazis, and when he says that we should shred the Constitution we are for the Constitution. It’s a pretty simple playbook.

We already hit bottom a while ago. Look, this dude, it is the reality. I don’t want to in any way make light of him, because he is a comical example. Politics littered with examples of lying liars who lie. And many who’ve lied about their resumes.

The thing is, usually you do get caught. Eventually they do get caught. So it’s like, people who are scared that like, hey, if I had this problem in my past, maybe I shouldn’t get into politics because someone will find out. They probably will, and that’s — this is what it looks like. You get made into a laughingstock if you decide to make up things whole-cloth about your background.

This gentleman will be the butt of jokes for the rest of his life, and rightly so.

LEMIRE: The editorial board of the New York Daily News is calling for Santos to step aside after these revelations. It writes in part this: “The man we know as George Santos, if that is indeed his name, is a work of fiction. When Santos takes the oath of office on January 3rd, there’s no reason to think it will be worth anything. After all, the trust of his constituents meant nothing to him. Not that he should take any such oath; if Santos has any shred of decency he’ll step aside now that his con has been exposed, even as some of his voters are standing behind him. We’re not holding our breath.”

This certainly feels like the further Trumpification of the Republican party.

Climate cult wants every person’s carbon dioxide emissions to be regulated – no more breathing … for the planet!
Louisiana trucker suing city over ordinance preventing him from flying flags with vulgar message against Biden and his supporters
SWAT officers shoot unarmed man wrongly suspected as hostage-taker — then officer blurts out, ‘F***, bro, f***,’ unaware of home cameras: Video
Bodycam Footage Matches Almaguer’s Reporting – So Why Did NBC Suspend Him?
Mostly Non-American Meta Oversight Board Weighs in on Trump Reinstatement