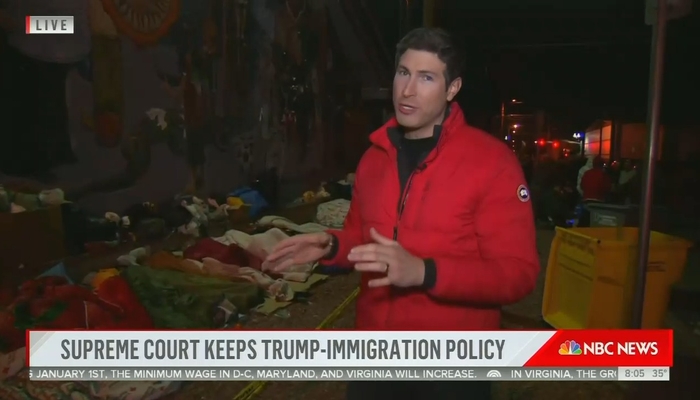 On the top Wednesday morning news shows, the broadcast networks kept up their fiendish attempt to serve as a puppet for both the Biden administration and illegal immigrants as the border crisis waged on with the Supreme Court putting a hold on the end of Title 42 while they hear arguments on the role of states in keeping their borders secure versus an ideology hellbent on flooding the country with unvetted arrivals.

NBC’s Today continued to be the worst. Fill-in co-host and White House correspondent Peter Alexander fretted in a tease: “Border bind. The wait grows for thousands of migrants after the Supreme Court ruled to keep Title 42 in place.”

Fellow fill-in co-host and White House correspondent Kristen Welker did her part and tossed to correspondent Sam Brock by lamenting the Court’s decision “[came] as the immigration crisis at many border towns around the country has reached a breaking point.”

Brock made it his mission over two reports to paint a world of sob stories with El Paso “officials say their chief concern right now is food and shelter for the population that is here, no matter how it fluctuates” with “another six months before we have resolution.”

After describing the scene outside a shelter, Brock bemoaned the Court’s decision as having “ricocheted through this community, sparking mostly disappointment” with one telling him it’s not “fair because…we are…human beings” (click “expand”):

Now, this is a shelter I’m standing next to right now. The line so long last night they couldn’t accommodate everyone. Look at what you’re seeing on the streets right now. People once again bundled up, shoulder to shoulder up, all up and down the block. And, Kristen, it is going to be at least another six months before these folks know whether or not they can even apply for asylum and yet, still, they tell me they would rather be in this position here than back in their home country. As swarms of people gathered for food and collected supplies in this overburdened section of El Paso, news of a Supreme Court decision keeping Title 42 intact for six more months ricocheted through this community, sparking mostly disappointment.

“We’re sad — very sad — they told us they were going to give us an opportunity, we feel betrayed,” Stephen tells me. His friend, Kind Rojas (sp?), an electrician, jumps in. “I don’t think this is fair because at the end of the day we are all human beings,” he says. Yet, moments later when I ask if they’d rather be here or back in their home country of Venezuela — [SPEAKING SPANISH] — widespread agreement, yes. They say at least here we eat bread with ham and cheese. In Venezuela, you might only afford the bread. The Biden administration quickly announcing it will “comply with” this ruling as the legal curveball comes as El Paso officials expect another lengthy strength of uncertainty.

Following more griping that Venezuelans won’t be allowed to officially stay so long as Title 42 is in place, he went to another illegal who told him his mantra, “Everything in the name of love. The past is history. Tomorrow is a mystery and we’re in the present. With the present, you make the best out of the future.”

Back live, Welker said “those images of people sleeping behind you, Sam, really underscore the urgency of the situation” and asked “what does the Biden administration plan to do in the meantime to deal with this crisis.”

Sounding like Karine Jean-Pierre, Brock boasted the (pro-open borders) “administration says they are advancing preparations right now to secure the border in a humane and orderly way, in their words.”

He added: “[T]hey believe Congress needs to step in right now, Kristen, with this situation — this broken immigration system, whether it’s on the enforcement side or the immigration side, cannot be fixed if Congress does not intervene and so far, they have shown no signs of being able to accomplish that theme.”

In the second report, fill-in co-host Jacob Soboroff lamented the Court’s hold “leaves migrants at the southern border and communities dealing with the influx in limbo.”

[C]learly, communities like El Paso are reeling and this just means it’s now going to be six more months before there is any resolution on this topic as the high court is taking up the idea whether 19 Republican-led states intervene in Title 42 policy. And it comes, Jacob, as there is abject human distress playing out on the streets behind. You’ll see all of these folks who are sleeping in blankets, some of them are pretty small. Jacob, we’re talking about families, children, loved ones, all of them shoulder to shoulder out here. I’m standing next to a shelter. The line was so long last night they couldn’t accommodate everyone. But as we look at the scope of this, there is an important point to make. Most of these people are from Venezuela. And the reason that’s relevant is because, under Title 42, Venezuela is one of those countries where the asylum seekers are blocked automatically. So, these folks even if they wanted to go to a shelter, cannot right now.

But almost to a person they tell me they would rather been in a situation like this, sleeping on the streets in temperatures that have dipped in the 20s and 30s than go back to their home country. Now, as far as talking to folks yesterday, trying to understand their reaction to this, many of them told me that they feel a sense of disappointment, certainly fear for their families and they were hoping to get an opportunity now to apply for asylum in this country, not to wait another six months. So, as far as the Biden administration’s response to this, they’re going to comply with the order. They say they’re getting preparations underway right now to secure the border in a humane and orderly way, assuming, Jacob, that Title 42 ultimately is lifted. They say this is a health policy, not an immigration policy, couldn’t stay in effect indefinitely. But the plea right now from the administration to Congress is to step in and act because this situation right now cannot continue to fall on the backyard and doorsteps of cities like El Paso. They has to be, they say, comprehensive immigration reform.

This has been a contentious political issue and while it’s been playing out through the courts, families have been coming here to the border this morning. We’ve seen mothers and kids sleeping on the sidewalks in an all-out downpour of rain and now unsure what to do next. This morning, in a blow to the migrants waiting across the southern border, Title 42 remains in place.

And on CBS Mornings, correspondent Scott MacFarlane took a detour from his life’s passion of January 6 to share the basics and made sure to also throw in a line often recited by Jean-Pierre at briefings: “The Biden administration has acknowledged the eventual end of Title 42 will likely lead to another surge of migrants, but they say the best way to deal with that is for Congress to pass comprehensive immigration reform.”

Wednesday’s White House PR push dutifully carried out by the liberal media was made possible thanks to advertisers such as Amazon (on ABC), Centrum (on CBS), and Liberty Mutual (on NBC). Follow the links to see their contact information at the MRC’s Conservatives Fight Back page.

To see the relevant transcripts from December 28, click here (for ABC), here (for CBS), and here (for NBC).