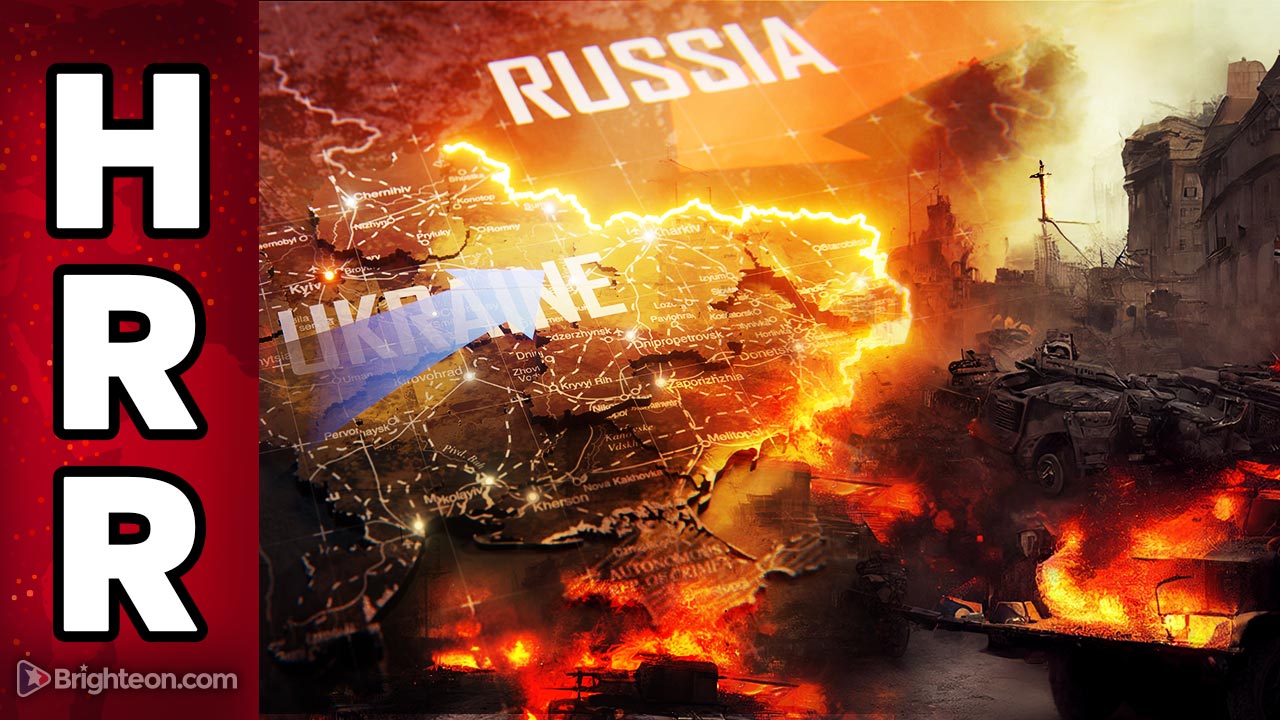 (Natural News)
Today’s article and podcast analysis features Robert Griswold, a highly experienced military analyst who has traveled the world and witnessed firsthand the ravages of war and failed diplomacy. Today he shares with us a stern warning about where the war in Russia is headed and why it could be catastrophic for Western Europe and the United States.

Robert Griswold is the CEO of ReadyMadeResources.com, a retailer of military-grade night vision, thermal vision, rifle scopes and other similar products. You can hear the full interview with him in my daily Situation Update podcast (below).

In essence, as Griswold explains, Russia is very strong on up-close land-based military gear such as artillery. Russia is also extremely strong and competent in the arena of thermobaric bombs (non-radioactive fuel-air explosives) and nuclear warheads, including hypersonic missile delivery and ICBMs with multiple re-entry vehicles (that can perform evasive maneuvers). However, between these two ends of the spectrum of violence escalation, Griswold explains, Russia is not as well equipped with “measured” military responses from which to choose.

The US is running Ukraine’s HIMARS attacks on Russian soft targets, including barracks full of recruits

Even worse, the United States appears to be deliberately provoking Russia into precisely such a response by providing key intelligence, satellite imagery and targeting solutions to HIMARS crews which are widely believed to be US soldiers out of uniform, operating as “contractors” in Ukraine. (HIMARS systems are highly complex and require many months of training to operate with proficiency.)

Additionally, both Griswold and this author believe that Russia is preparing a major offensive against Ukraine that would involve hundreds of thousands of Russian troops, combined with short and medium range missile strikes on key military and infrastructure targets inside Ukraine. This offensive — almost certain to take place before the spring thaw of Southern Ukraine territory — would likely topple Kiev and force the Zelensky regime into fleeing westward.

From there, NATO and Polish forces are likely to enter Western Ukraine under the guise of creating a kind of “safe zone” for whatever retreating Ukrainian forces still exist. This safe zone will almost certainly be used by Poland as a future claim against today’s Ukrainian territory (formerly Polish territory) while providing USA / NATO forces the opportunity to contrive scenarios of direct engagement with Russian forces as they move westward.

The end result is likely a direct war — and a full declaration of war — between the United States and Russia. This is a highly likely outcome in 2023.

Russia has said it will not use nuclear weapons except in cases it deems to be “existential” to Russia itself, yet with US State Department leaders essentially calling for the assassination of Putin and the total destruction of Russia itself, that threshold appears to have already been crossed.

Making matters worse, when Russia and the USA fall into direct conflict, China will be watching closely, waiting for an opportunity to strike, warns Griswold. Since the United States has sent an enormous supply of its weapons and munitions to Ukraine, the continental United States is more vulnerable than at any time since World War II, and both supply chain disruptions and a collapsing domestic labor pool mean it will take years for the Pentagon to replace the munitions, weapons and other equipment shipped to Ukraine.

Some military analysts argue that the United States is incapable of fighting a single front war with Russia, largely due to Russia’s overwhelming artillery capabilities combined with its domestic munitions production infrastructure (which appears to be running at full force, 24/7). Add a second front to that war — a direct conflict with China, likely involving Taiwan — and maintaining combat effectiveness across both theaters of war becomes impossible by today’s US military forces.

While the United States has the strongest naval forces in the world, but even those naval forces may be ordered to stand down by a corrupt, blackmailed Joe Biden and his compromised Pentagon generals who seem far more interested in enriching the nation’s weapons corporations than in achieving real-world combat readiness. Culturally, too, both Russia and China have been removing snowflakes and sissies from their ranks, while the “woke” Pentagon has been pushing transgenderism, cross-dressing and feminization of military culture.

With the US Army failing to meet current recruiting goals — and America’s military-aged men suffering from widespread obesity, substance addiction and mental health issues — it is impossible for the US military to achieve any level of meaningful recruitment that would result in an effective fighting force. The days of brave 19-year-old United States Marines storming the beaches of Normandy are long gone. The average male 19-year-old American living today is a video game addict “metrosexual” soy boy who can hardly change a flat tire, much less operate an M1A rifle.

You can’t raise an army from a culture of sissies. China and Russia already know that, which is why they ban such cultural transformations targeting their own countries.

Beyond the points mentioned above, Russia possesses Poseidon underwater remote vehicles which can plant 100 megaton warheads near the coasts of any continent, awaiting satellite-broadcast detonation orders. These weapons can unleash the much-feared “radioactive tsunamis” that would inundate coastal cities with enormous quantities of radioactive ocean water, rendering these areas uninhabitable for at least three centuries, which is ten half-lives of Cesium-137.

One such weapon system is believed to be parked off the East Coast of the United States, where its radius of effect would destroy Norfolk, Washington D.C. and even New York City. Another weapon may already be positioned off the coast of Britain, ready to rain down radioactive hell upon London and other low-elevation cities across the UK.

These “doomsday” weapons aren’t science fiction. They already exist and are rumored to have already been deployed. This means the United States of America is one detonation away from annihilation… yet the US continues to provoke Russia with economic sanctions, de-platforming from the SWIFT transaction system and continued aiding of Ukraine with enormous quantities of weapons, equipment and (fiat currency) money. To date, the US has so far pledged over $110 billion to Ukraine — a number larger than Russia’s entire annual military budget.

The next escalation may prove fatal for western civilization

At whatever point Russia chooses, it can decide to end the United States of America as we know it. There are zero defenses against the Poseidon doomsday weapon, and there are no western defenses that are effective against Russia’s nuclear-capable hypersonic missiles. This means that Putin can, at whatever time he wants, rain down nuclear strikes upon cities like London, Berlin or Washington D.C.

When someone has a gun pointed at your head, try not to give them lots of reasons to pull the trigger.

But that’s exactly what Biden and Zelensky are doing: Escalating their attacks on targets inside Russian territory while deploying an increasing number of U.S. weapons and military personnel to wage attacks against, for example, barracks full of young Russian recruits who are blown up while they sleep. The emotional impact in Russia that stems from such events risks an emotionally charged, asymmetrical response from Russia itself. Importantly, Russia has the missile hardware and technology to carry out thermobaric or nuclear strikes on western targets, including targets in the United States of America.

What happens when Putin decides one day that since America is running the HIMARS attacks and sabotage explosions in Russian territory, then Russia has the right to retaliate against targets on U.S. soil? Most likely, that threshold has already been reached in the minds of Russian military leaders. And they are well aware that the most effective way to cripple the US military response against a new Russian offensive would be to strike the Pentagon itself, on U.S. soil, and cripple the military infrastructure that coordinates theater of war logistics.

That’s why none of us should be surprised if a Russian offensive in Ukraine is timed with Russian missile strikes (or cyber warfare offensives) on U.S. targets within the continental United States. Additionally, Russia’s hypersonic missiles could destroy US aircraft carriers and weaken the US Navy, crippling its ability to project force in the Taiwan / China theater.

The bottom line? 2023 is shaping up to be a very dangerous year, and the United States of America is currently run by dangerous, incompetent, illegitimate people who rigged the last three elections (2018, 2020, 2022) and only gained power through deception and criminal behavior rather than merit. Almost by definition, they are not qualified to lead the United States through a global war, and this means the US response to attacks from Russia or China will be dismal, if not downright apocalyptic.