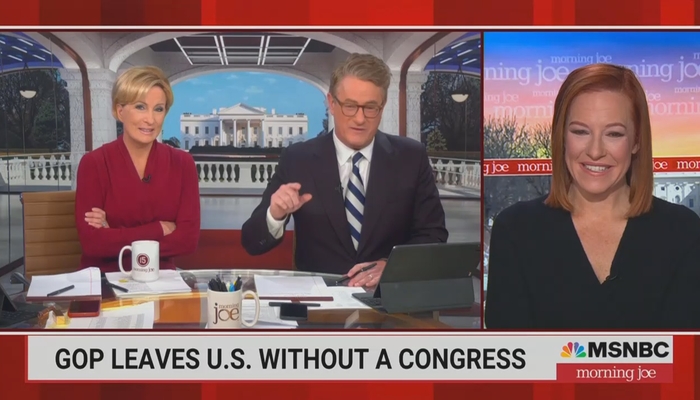 Such a tough hombre, that Joe Scarborough!

On Friday’s Morning Joe, Scarborough said “I’d die before continuing to negotiate against myself” like Kevin McCarthy is doing. Scarborough alluded to McCarthy as “the snowflake, triggered, weak variety of Republicans that appear to be roaming Capitol Hill today.”

The table-pounding Muy Macho Joe said that instead of negotiating, he would “stare down” the holdout Republicans.

Undoubtedly, Scarborough’s only words to the holdout Republicans would be: “do you feel lucky? Well, do you?”

Of course, rather than having the courage to remain in the GOP and fight for change, Scarborough scuttled off to MSNBC and has spent his time there sucking up to the liberals in the exec suites, in his audience, and in his elite Nantucket set.

Note: This isn’t the first time Scarborough bragged about what a tough dude he is. Back in June, we caught him claiming that if he found a visitor to the Capitol taking pictures in a place Joe didn’t like, he’d tell him, “put the camera down or I’m gonna make you eat it  . . . I would slap the camera out of his hand.”

What kind of guy has a habit of going on TV to tell the world what a macho guy he is? Paging Sigmund!

On Morning Joe, Joe Scarborough saying he’d “die” before negotiating like “snowflake” Kevin McCarthy was sponsored in part by Booking.com and GlaxoSmithKline, maker of Parodontax.

JOE SCARBOROUGH: I don’t understand. Sorry to be Tom Hanks in “Big.” I don’t get it. I don’t get it. Jen Psaki, I can’t tell you how many times I’ve given people the advice throughout my life: [bangs desk] don’t negotiate against yourself. Sit back, wait.

If they’re not meeting you halfway, you sit there, and just, just to be blunt, it’s the old Republican in me, not the snowflake, triggered, weak variety of Republicans that appear to be roaming Capitol Hill today.

SCARBOROUGH: He’s not even negotiating with the four or five people who say they will never vote for him. He’s giving away even more of the store, negotiating against himself to only get halfway there! This is one of the weakest public displays I’ve ever seen.