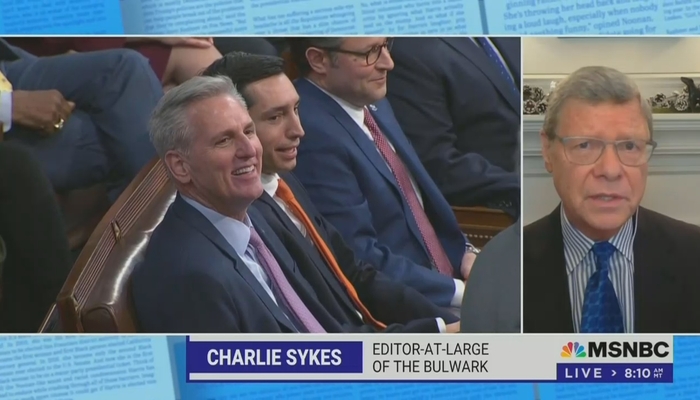 The liberal media likes to depict Never Trumpers like Charlie Sykes as the voice of center-right reason and moderation. But in recent days, founder of The Bulwark and MSNBC columnist has revealed a spiteful, vulgar streak.

Last week, we caught him literally laughing as he reveled in Kevin McCarthy’s sticky predicament in seeking the speakership, and pronouncing with malicious glee the names of George Santos and Marjorie Taylor Greene, as people McCarthy had to rely on. But that was tame compared to his spit take on Jonathan Capehart’s Sunday Show.

Now that McCarthy has secured the Speaker’s gavel, Sykes took Sunday’s Democrat talking point about how the House Republicans will be incapable of governing and headed straight for the crotch:

“You look at the kind of concessions he’s made, putting the bomb throwers on the Rules committee, the motion to vacate. It is extremely difficult to see how Kevin McCarthy can negotiate anything, because the man has self-gelded his speakership.”

“Gelded” is, of course, a synonym for castrated.

You might have thought that the normally proper Capehart would have been offended by Sykes’ crude metaphor. But to the contrary, he and Michael Steele, of the disgraced Lincoln Project, could be heard laughing off-camera, with one of them saying, “that is true.”

For the liberal media, rules of decency and decorum are apparently suspended when it comes to belittling Republicans.

Needless to say, if a Fox News personality had made an equivalent comment about a Democrat—let alone a woman!—the calls for cancellation would echo through liberal land!

On Jonathan Capehart’s Sunday Show on MSNBC, Charlie Sykes, founder of The Bulwark and an MSNBC columnist, saying that as a result of the concessions he made to holdouts in order to get the gavel, Kevin McCarthy has “self-gelded his speakership” was sponsored in part by Babbel and Sandals.

JONATHAN CAPEHART: The debt ceiling fight is a huge test. But he has got a test tomorrow with getting that rules package passed. And it’s not just any rules package, it has all the concessions that McCarthy gave a way to secure the gavel. So how likely is it, Charlie, and then Chairman Steele, that we’re gonna see the same chaos tomorrow that we saw all last week?

CHARLIE SYKES: Well, we’re going to see a lot, a lot of chaos. It might fail on the first few votes, eventually they will get something done. And this is why this has become a much bigger crisis than just Kevin McCarthy for the Republican party. Because as Chairman Steele said, now the question is, has Kevin McCarthy made so many concessions that Congress is going to be unable, unable, incapable of fulfilling its basic functions: keeping the government open, funding major government programs including the military, paying the bills, and avoiding an absolutely economically catastrophic default on the debt.

And you look at the kind of concessions he’s made — putting the bomb throwers on the Rules committee, the motion to vacate.

It is extremely difficult to see how Kevin McCarthy can negotiate anything. Because the man has self-gelded his speakership. [Laughter.]

SYKES: And I think there’s reason to be very, very concerned with that chaos.