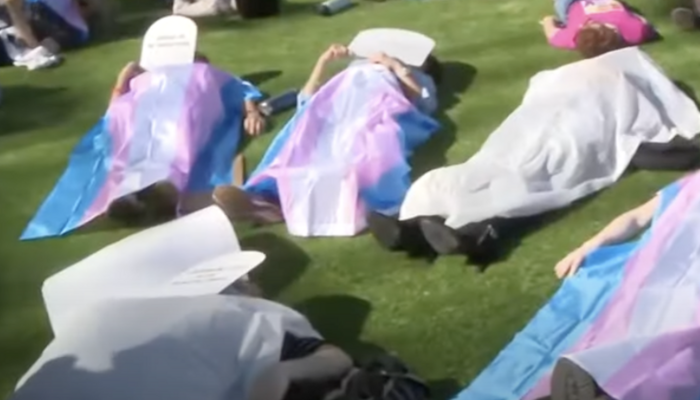 Don’t let that door hit ya on the way out.

Rynn Willgohs, a 50-year-old transgender woman, is trying to figure out ways to leave the United States and seek asylum abroad due feeling targeted and attacked within the nation. WIllgohs started TRANSport to help others do the same.

Willgohs told VICE that theres “like 30 states” that he would not feel comfortable driving in due to the “increasingly hostile national climate.” He also added, “All you need to do is look at the news and see how bad it’s going to get in the country. We’re accused of being pedophiles and of grooming children. We’re being accused of being a social contagion that makes every child think they are in the queer community. That’s the farthest from the truth.”

Maybe he’s disregarding the plethora of transgender/lgbtq teachers who specifically target their students to be part of the gender spectrum. I’d consider that a “social contagion” but maybe that’s just me. I’m sure TRANSport’s European destinations are more enlightened.

Willgohs supposedly was inspired to flee after Roe v. Wade was overturned in June of 2022. Maybe he feared he wouldn’t be able to abort a child that he couldn’t ever become pregnant with? Regardless, TRANSport was coined.

The group is in its beginning stages and is is hopeful to “start taking applications toward the end of February and help people get the ball rolling to make the leap across the ocean.”

Presently the group has about 30 people who have expressed interest in seeking asylum abroad. Running as a non-profit organization, TRANSport can accept donations, which it plans to use to  help people legally change their gender prior to fleeing the U.S, as well as help with passport and travel fees.

Regardless of whether TRANSport launches people out of the States, there’s still a lot of details to work out. Nora Noralla, a human rights researcher in Berlin, told VICE that Americans can come to Europe if they want and don’t need to/won’t be able to qualify for asylum. In order to apply for asylum, Noralla said that people have to prove that the entire country isn’t safe for an individual and there’s plenty of blue states, as she mentioned, that have woke values that may align better with trans individuals.

I guess time will tell what the future holds for TRANSport but hey, maybe the U.S. will get a little less crazy.

‘No way I was going to leave him like that’: Cop risks tornado winds for his K-9 partner
Video: Drag queens perform during Milwaukee Bucks ‘Pride Night’ halftime show. But not everyone is gleeful about it.
Kroger Begins Selling World’s First Carbon-Neutral Eggs in the US
‘Sit this one out’: Father of teen killed in Parkland shooting responds when Newsom criticizes Florida permitless carry proposal
Florida man sues; says sheriff recklessly featured him on ‘Wheel of Fugitive’ spoof video when he was in jail