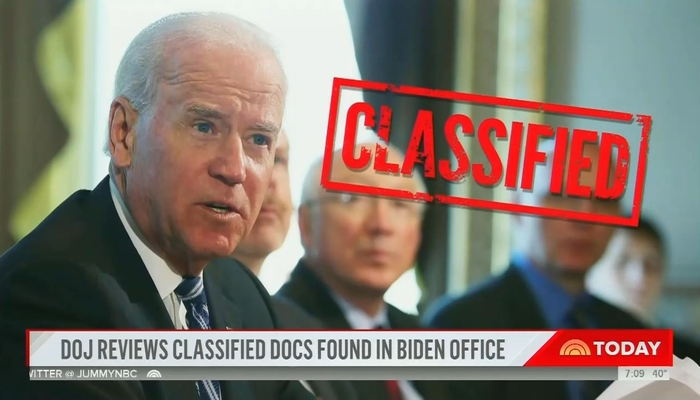 Along with the Monday night network evening newscasts, the Tuesday morning broadcast network news shows tried to dial back the heart rates of liberal viewers by insisting there’s no there there to classified documents being found in the Washington D.C. office of President Biden’s University of Pennsylvania think tank. Instead, it was a case of Republicans “pounc[ing]” despite “key differences” between Biden and what they hope to be the jailing of former President Trump for classified documents found in Mar-a-Lago.

And predictably, none of them mentioned how the Penn Biden Center has received over $50 million in money from communist China.

NBC’s Today wasn’t pleased. Co-host Hoda Kotb griped in a tease that Republicans are “outraged” with the news. During the actual report, chief White House correspondent Peter Alexander made sure to state off the top that Team Biden was “cooperating with the Justice Department review of those classified documents that date back to Mr. Bidens’s time as Vice President” and, upon discovery on November 2, were immediately reported.

Of course, the powers that be in the intelligence agencies waited to leak this to their friends until the 2022 midterms concluded.

“[T]he Justice Department is reviewing the discovery of what one of the President’s attorney calls ‘a small number of documents with classified markings’ found last November in Mr. Biden’s former office at the Penn Biden Center,” he added.

Alexander continued to excuse the taking of classified documents from SCIFs so long as you say you’re sorry and insist you have no idea how they got there. After stating that they were found by Biden’s “personal lawyers” and they were immediately turned over to the National Archives, Alexander trotted out one of the top drinking phrases in politics: “Republicans quickly pounced on the revelation.”

ALEXANDER: Republicans are also drawing comparisons to former President Trump, who’s under investigation for taking hundreds of classified documents when he left the White House and resisting repeated requests to return the materials even after being subpoenaed. The FBI ultimately recovered the materials after carrying out a court-ordered search of the former President’s Mar-a-Lago estate. Overnight, Mr. Trump posting on his social media site, “when is the FBI going to raid the many homes of Joe Biden, perhaps even the White House? These documents were definitely not declassified.” Last fall, president Biden criticized Mr. Trump when asked on 60 Minutes about this FBI photograph of the seized documents spread out by agents on the floor at Mar-a-Lago.

BIDEN [on CBS’s 60 Minutes, 09/18/22]: How that could possibly happen, how anyone could be that irresponsible?

ALEXANDER: President Biden did not respond to a reporter’s shouted question about the issue last night. [REPORTERS SHOUTING] But the White House says the circumstances are far different than those in the Trump case, emphasizing that the recently discovered documents were not the subject of any request or review by the Archives and that once found, they were turned over immediately. Attorney General Merrick Garland looking to avoid the appearance of a potential conflict of interest has assigned a U.S. attorney in Illinois appointed by former President Trump to review how the documents ended up at the Penn Biden Center, Savannah.

ALEXANDER: Congressman James Comer, he’s the Kentucky  Republican set to become the chairman of the House Oversight Committee, he said yesterday that he plans to send letters to the White House and to the National Archives within days demanding answers. Comer also said he thought it was unlikely President Biden did anything wrong by taking the documents, but that he was more concerned Mr. Trump may have been treated unfairly.

ABC’s Good Morning America co-host and former Clinton official George Stephanopoulos also made it seem benign: “To Washington where President Biden’s lawyers reveal that documents marked classified were found in office space that he used as a private citizen. The Justice Department is reviewing how that happened.”

After chief Justice correspondent Pierre Thomas laid out what we know so far, Stephanopoulos chimed in to make clear “there are key differences between this and the case involving former President Trump.”

Thomas agreed and explained how it was all above board: “[T]hese were found by attorneys for President Biden and they immediately notified the National Archives, which was apparently unaware that they were missing. Former President Trump received a subpoena from a federal grand jury after a long-running dispute with the National Archives over boxes of documents he had taken from the White House upon leaving office.”

CBS was first to report this troubling story, so CBS Mornings naturally had the most time (four minutes and 44 seconds versus ABC’s two minutes and four seconds and NBC’s three minutes and 49 seconds).

Co-host Nate Burleson also made sure to temper expectations by saying only “roughly ten documents” were “marked classified.” Having broken the story at CBSNews.com, correspondent Adriana Diaz framed the reactions as political: “[A]s soon as we broke this news, it set off a political firestorm with Republicans who are now control the House of Representatives, and they are asking for answers.”

“CBS News learned roughly ten classified documents found inside this former office of President Biden…Sources told CBS News the Justice Department launched a review into the matter after the President’s personal lawyer found a small number of documents with classified markings in a locked closet,” she said.

Diaz signaled this was a nothingburger because, while “[i]t is illegal to keep classified material in an unsecured location,” it’s unclear whether anyone committed a crime and will face charges.

Of course, her two experts dismissed the finding (click “expand”)

JAVED ALI: If there was some other nefarious purpose or criminal intent behind that, that remains to be seen, but this could just be a case of sloppy record-keeping.

DIAZ: The classified documents in Biden’s former office were discovered November 2nd, about three months after the FBI issued a search warrant at former President Trump’s Florida home and office. That’s after he refused to comply with repeated requests to return the materials. FBI agents laid out on the floor some of the more 100 seized documents marked classified. Mr. Biden was critical when he spoke to Scott Pelley in September for 60 Minutes.

BIDEN [on CBS’s 60 Minutes, 09/18/22]: How that could possibly happen? How anyone could be that irresponsible?

DIAZ: Former federal prosecutor Scott Frederickson says there are key differences between the Biden inquiry and that involving former President Trump. [TO FREDERICKSON] How significant is that they were self-reported, voluntarily turned over?

FREDERICKSON: I think the self-reporting is the single most important part of the situation. It indicates a lack of intentional conduct. It’s completely different from the Mar-a-Lago case, which tends, based on reporting, to indicate there was an intentionally activity to take those documents.

Co-host and Democratic donor Gayle King nonetheless fretted: “Oh boy, Adriana. I’m still wondering if anything is marked classified how it leaves the White House to begin with, but that’s a whole other story, I’m sure.”

This attempted Jedi mind trick by the liberal media was brought to you by advertisers such as Ashley Homestore (on CBS), Citi (on NBC), and Google (on ABC). Follow the links to see their contact information at the MRC’s Conservatives Fight Back page.

To see the relevant transcripts from January 10, click here (for ABC), here (for CBS), and here (for NBC).