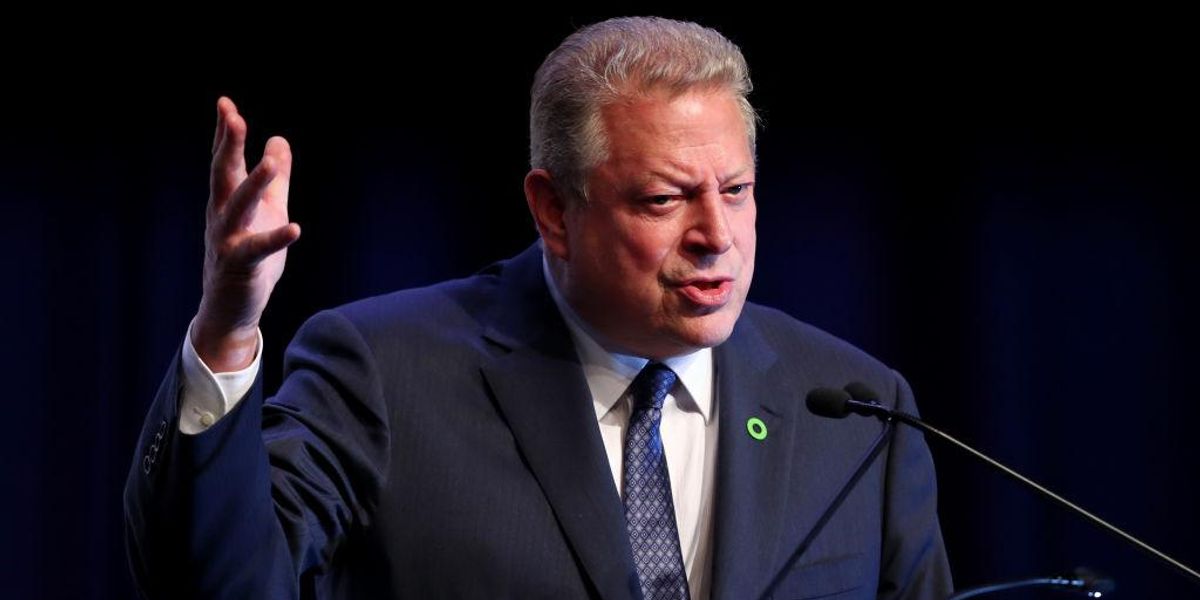 Climate activist and former Vice President Al Gore (D) was mocked by Twitter users for going on an animated, “unhinged” tirade this week at the World Economic Forum’s annual summit in Davos, Switzerland, where he talked about the dangers of climate change, Fox News Digital reported.

Gore participated on a panel with other climate activists to present a discussion on “Leading the Charge through Earth’s New Normal,” according to the World Economic Forum website.

The discussion aimed to answer the question, “What visionary leadership is needed for systems thinking, transformative solutions and global collaboration to build a more inclusive, prosperous and sustainable future?”

During Gore’s energetic speech, he ranted about how climate change has led to “boiling” oceans and weather events like “rain bombs.” He predicted that there would be 1 billion climate refugees within the next century if people continued to use the sky like “an open sewer.”

“People are familiar with that thin blue line that the astronauts bring back in their pictures from space,” Gore stated. “That’s the part of the atmosphere that has oxygen, the troposphere, and it’s only five to seven kilometers thick. That’s what we’re using as an open sewer.”

“We’re still putting 162 million tons [of greenhouse gas] into it every single day and the accumulated amount is now trapping as much extra heat as would be released by 600,000 Hiroshima-class atomic bombs exploding every single day on the earth,” he continued.

“That’s what’s boiling the oceans, creating these atmospheric rivers, and the rain bombs, and sucking the moisture out of the land, and creating the droughts, and melting the ice and raising the sea level, and causing these waves of climate refugees,” Gore added.

Gore warned that a climate refugee crisis would lead to “xenophobia and political authoritarian trends” that would ultimately hinder “our capacity for self-governance.”

“Look at the xenophobia and political authoritarian trends that have come from just a few million refugees,” Gore exclaimed. “What about a billion? We would lose our capacity for self-governance on this world! We have to act!”

At one point during his speech, Gore lauded the Inflation Reduction Act as “primarily a climate act” and claimed that “renewable energy” is “now the cheapest source of electricity in almost the entire planet.”

Twitter users shared clips from Gore’s speech, mocking him for his animated tirade.

Journalist Tom Elliott wrote, “Al Gore goes on unhinged rant, claims we’re ‘boiling the oceans’ and creating ‘rain bombs’ and ‘sucking the moisture out of the land and creating the droughts and melting the ice and raising the sea level.'”

Noah Pollak, a contributor with Washington Free Beacon, replied to a clip of Gore’s speech, stating, “If he wasn’t at Davos in an expensive suit you’d hold your kids’ hands tighter as you hurry past and hope he gets the help he needs.”

u201c@algore Al Gore goes on unhinged rant, claims we’re “boiling the oceans” and creating “rain bombs” and “sucking the moisture out of the land and creating the droughts and melting the ice and raising the sea level”u201d

Florida man caught on viral video beating his dog gets 3-year prison sentence and is forbidden from owning any animals
Australian Olympic Bobsledder and Rugby Player Dies Suddenly at 35
Florida Man Friday: Get the Real Poop on His Late-Night Deposit at Joe’s Crab Shack
Leftist Privilege Gets Lawyer-Turned-Firebomber Off Easy
‘Truly an authoritarian personality’ NYU professor pounces after DeSantis suggests students shouldn’t have access to their phones during class