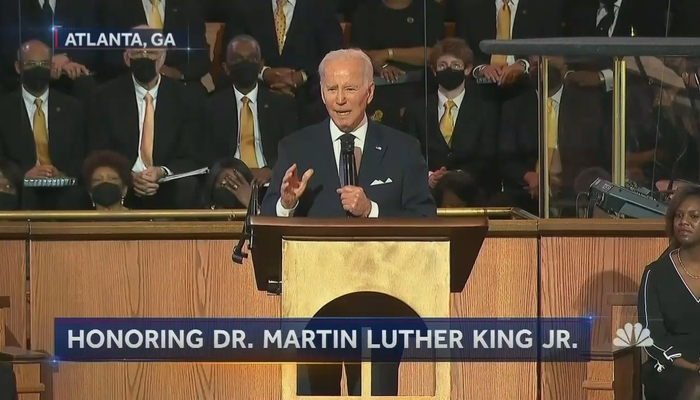 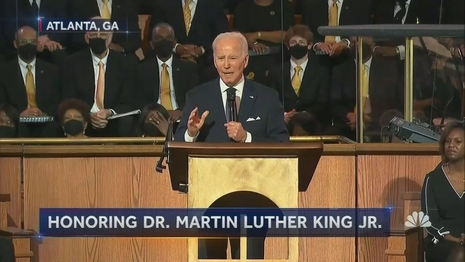 Many years ago, radical leftists accused reporters of being “stenographers to power,” but in the modern age, our elite reporters are only stenographers to one party, whether it’s in power or not. Just examine coverage of President Biden’s speeches for Martin Luther King Day.

Madhani began: “President Joe Biden made a historical pilgrimage Sunday to ‘America’s freedom church’ to mark Martin Luther King Jr.’s birthday, saying democracy was at a perilous moment and that the civil rights leader’s life and legacy ‘show us the way and we should pay attention.’”

This reads like White House press release copy. Biden’s speech was quoted in seven paragraphs. The only other person quoted was Sen. Raphael Warnock, who “noted that the president was ‘a devout Catholic’ for whom ‘this Baptist service might be a little bit rambunctious and animated. But I saw him over there clapping his hands.’”

To describe Biden as a “devout Catholic” is to ignore his entire record on social issues. While he touted the Catholic rosary on his wrist on Sunday, the president’s Monday speech in Washington for Rev. Al Sharpton’s National Action Network touted enshrining “marriage equality” and “protecting a woman’s right to choose.” That’s the polar opposite of “devout Catholic.”

On the front page of Monday’s USA Today was the headline “In the pulpit of MLK’s church, Biden preaches promise.” The gusher was Francesca Chambers.

“President Joe Biden took his battle for the soul of the nation on Sunday morning to the pulpit of the historic Atlanta church that Martin Luther King Jr once led,” the Gannett stenographer began. Then she added the flourishes about how Biden would “redeem” America’s soul, and other phrases coined by Biden speechwriter Jon Meacham.

The nation’s soul had to be redeemed from “those who traffic in racism, extremism, and insurrection.” We can guess Biden is discussing Republicans here. That’s certainly what pro-Biden reporters are hearing….and probably enjoying.

Biden’s speech was quoted in four paragraphs and summarized in others. Chambers added quotes from Warnock, Democrat adviser Donna Brazile, and leftist activist Melanie Campbell, and ended with White House adviser Keisha Lance Bottoms. No Republican reaction to the speech was required in this POTUS-polish.

Republicans did critique the speech. The “RNC Research” Twitter account noted how Biden began: “I used to go to 7:30 Mass every morning in high school and then in college, before I went to the Black church. Not a joke.” But when he tried out this line in 2020, the Washington Free Beacon found congregants at the black church nearby said they couldn’t recall Biden ever attending.

Biden added the church was “where we’d organize to march to desegregate the city.” Jessica Chasmar at FoxNews.com reported that in 1987, during his first campaign for president, Biden said that during the Sixties, “I was not an activist. I worked at an all-Black swimming pool in the east side of Wilmington, Delaware. I was involved in what they were thinking, in what they were feeling….But I was not out marching, I was not down in Selma, I was not anywhere else.”

As president, Biden makes up his own teenage dream history to impress the people in black churches, and it’s “too good to check” for reporters at AP and USA Today and elsewhere.  The fake biography of George Santos is brand-new and shocking, but Biden’s fifty years of never-ending biographical invention has become a non-issue to reporters. All that matters is that Democrats had a warm and happy MLK Day.