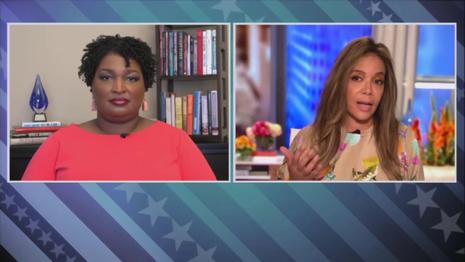 The View continued boosting Joe Biden’s presidential campaign this week by having on another guest from his VP shortlist on Thursday’s show. This time it was Stacey Abrams, who lost her gubernatorial race in Georgia in 2018 but is still treated by the media like she won. With the aid of The View hosts, she spent the majority of the show fearmongering that the 2020 election would be plagued by voter suppression at the hands of Republicans.

Co-host Whoopi Goldberg set the tone for the interview by introducing Abrams as familiar with another “controversial Georgia election,” referring to her 2018 race and Tuesday’s primary debacle in Georgia, where there were long lines from broken machines and understaffed and under trained poll workers. After repeatedly blaming Georgia’s Republican Secretary of State, co-host Meghan McCain called her out for what she was conveniently leaving out in her blame game:

MEGHAN MCCAIN: There’s a lot of finger pointing going on, and you seem to be implying that it was Georgia’s secretary of state who was targeting communities of color. But most of the counties that had issues this week were run by Democrats. Do you think we should be quick to blame Republicans when most of the problems like consolidated polling solutions and older poll workers canceling over health concerns were a result of the coronavirus?

Since Abrams runs an organization entirely devoted to the belief that we have widespread voter suppression problem in this country, of course she provided more fearmongering about Republicans cheating:

“One of the things that’s most dangerous is indeed the dry run Republicans are holding across our country, but it’s also why we created Fair Fight 2020,” Abrams acknowledged before plugging her group some more.

Co-host Whoopi Goldberg also gave the Joe Biden VP shortlist pick the opportunity to tout how she agrees with Biden on his ideas for police reform: “So are you a supporter of shifting how we are policed or do you think it’s better to just think about getting rid of it? What’s your take on it? Because Biden says he wants to shift towards making it better.”

Back in April, The View hosts declared that Abrams “obviously” should be Biden’s VP pick, and that it was “offensive” if a black woman at the very least, wasn’t.

You can read a relevant transcript, below:

MEGHAN MCCAIN: Hello, Ms. Abrams. It’s Meghan. I just want a little bit of clarity, if it’s okay. There’s a lot of finger pointing going on, and you seem to be implying that it was Georgia’s secretary of state who was targeting communities of color. But most of the counties that had issues this week were run by Democrats. Do you think we should be quick to blame Republicans when older poll workers canceling over health concerns were a result of the coronavirus?

ABRAMS: So I want to say a couple of things. Number one, in the state of Georgia, the secretary of state is the election superintendent. It is in the constitution that it is his responsibility to direct, train and to oversee the conduct of our elections. We allow counties to do the direct implementation, but it’s it’s the responsibility of the secretary of state, and if there are problems, the secretary of state’s office should have the resources and responsibility to hold them accountable. Number two, it is a false narrative that the secretary of state has pushed out this is only happening because of democratic leadership. Our two most populous counties, Fulton and gwynnette, and we had to give judicial orders to extend the times to vote. Let’s also be clear in the area where the speaker of the house lives, they also had issues because machines weren’t operable. This affected every single part of our state, and the reality is your access to democracy shouldn’t depend on your county of residence. We know this is also a challenge faced in South Carolina and in Nevada, but Georgia’s collapse and disaster was so large that it’s been over — it’s overshadowed everyone, but fundamentally we deserve to have elections that work for everyone, and yes. I believe that we saw a combination of malfeasance which is a continuance of the voter suppression we saw, and we will see a breakdown of our voting in November.

SUNNY HOSTIN: Yes, Stacey. You know, Georgia’s a battleground state that’s expected to be fiercely competitive between Biden and Trump. Do you worry that the type of voter suppression that we saw this week was a dry run for the November election? Is there time to fix it, and what about the type of psychological effect that will happen that you write about in your book? Because this type of voter suppression may convince people like your grandmother that it’s just not worth voting, that their vote won’t happen, their votes won’t be counted.

STACEY ABRAMS: One of the things that’s most dangerous is indeed the dry run Republicans are holding across our country, but it’s also why we created Fair Fight 2020. We started this in August of 2019 because we knew we needed to use the primaries and every state to understand what the playing field was going to look like for voter suppression. There were those who were concerned that we couldn’t stop it.You can’t stop what you don’t know is going to happen, and in every state, the 18 states where we’re supporting voter protection teams, these are all battleground states.Where we are learning what they’re doing, we’re collecting stories that can be used for litigation, and for training. We’re doing our best so we know what’s at stake so we can use the next five months to fix the problems. That’s what fair fight 2020 exists for, but it also exists as you pointed out — I talk about my grandmother, and the fact when she had the first chance to vote in 1968, she was afraid to do so because she remembered what — how vicious voter suppression felt, and she was not afraid that she didn’t have the right. She was afraid to use that right, and what we’re doing through fair fight 2020, fair fight action, is to work on enlisting people and fighting back. What we’re seeing in these demonstrations is that people are tired. They are exhausted by the systemic inequities, by the racism. They are exhausted by a federal government that refuses to acknowledge that more than 100,000 people have died from a disease that if we had done our job, could have been mitigated. They are tired of the lack of leadership, they are tired of the [indiscernible and they want better], and what we saw in Georgia, as devastating as the election caucus was, it was also a celebratory moment because we saw more people turn out in this primary than we saw turnout in 2016. That means that the conversation is working. We want people to be angry about voter suppression, not defeated by it.

WHOOPI GOLDBERG: And is there — I mean, I feel there’s a huge debate being waged in the country about the best path forward towards police reform because I don’t believe you should get rid of the police, but you’ve got — you cannot — you can’t not see that we have an issue. So are you a supporter of shifting how we are policed or do you think it’s better to just think about getting rid of it? What’s your take on it? Because Biden says he wants to shift towards making it better.

And no one should believe that systemic racism, that inequities, the challenges with drug addiction and mental health issues, that those should be allowed to run rampant and to only have one solution, which is criminalization. What people are talking about is transformation. We have to rethink what we do because what we are doing doesn’t work, and I think what vice president Biden has called for is part of that solution, but we also have local elected officials, mayors and police chiefs and sheriffs and DAs that all have a part of picking our systemic inequities in our justice system. And As much attention as necessarily was focused on George Floyd, we still  have the challenge we had Ahmaud Arbery being murdered in the streets by using citizen’s arrest laws, and those laws were designed to terrorize black and brown folks. We know that cities have to remove their no-knock warrant rules that allow Breonna Taylor to be murdered in her home. The new question has to be how do we transformation public safety so that the entire public can be safe?