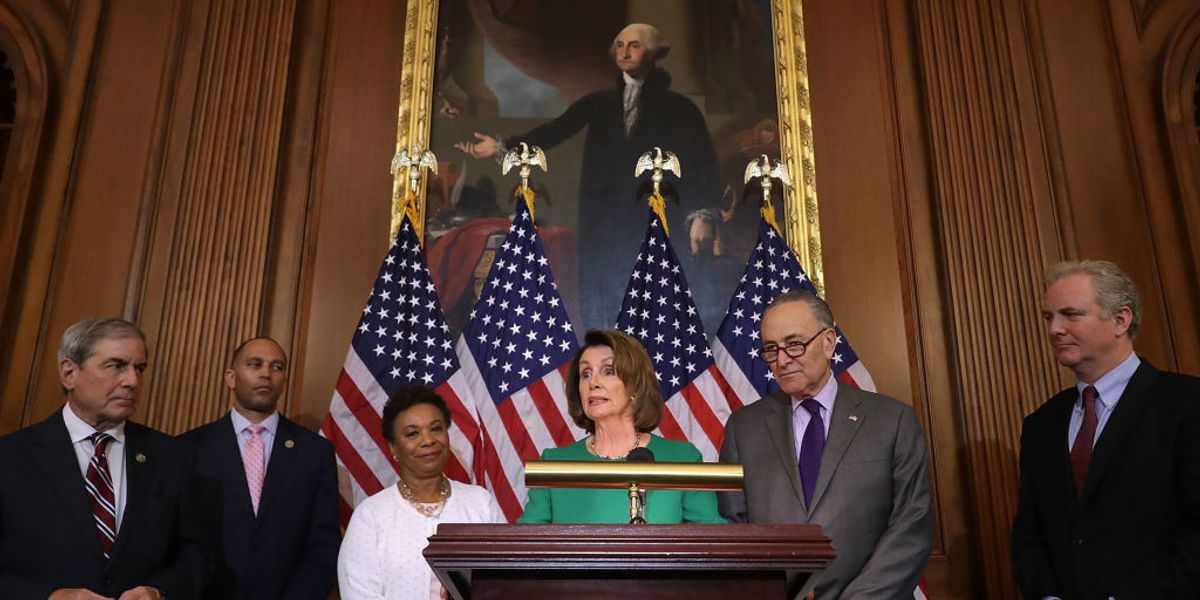 News & Politics
As the United States’ budget deficits and national debt have reached post-World War II highs during President Donald Trump’s administration, thanks in part to the trillion-dollar coronavirus stimulus, Democrats are openly telling voters ahead of the election they can’t stop and won’t stop the spending if they win.

For the first time in a decade, Congress next year will face no budget caps or automatic spending cuts as the limits on spending imposed by the Budget Control Act of 2011 are set to expire. Also, next year Congress is set to vote on another debt ceiling increase to allow the government room to borrow the trillions of dollars to cover its profligate spending. Knowing this, Democrats openly told Politico that if they win the election, controlling the House, the Senate, and the White House, the plan is to spend, spend, spend on anything and everything they want.

Democratic presidential candidate and former Vice President Joe Biden has proposed $5 trillion in new spending on universal pre-K child care, tuition-free community college, Green New Deal-lite policies, expanding Obamacare, and more. Though the national debt is over $27 trillion and a full 37% bigger than the size of the U.S. economy, Democrats believe there is no consequence to the amount of spending they envision.

“There’s really been no negative economic impact from a doubling of the national debt,” House Budget Committee Chairman John Yarmuth (D-Ky.) said in an interview with Politico. “I think economists are thinking differently about the national debt and how much room we have in the economy for fiscal stimulus. … We can afford to do almost anything we want to do.”

There’s always the chance that the U.S. Senate may block some of the most extreme spending dreamed up by progressives in the House, but Yarmuth and other Democrats have a plan for that. According to Politico, Democrats intend to use a legislative maneuver called budget reconciliation — the same tactic they used to pass Obamacare — to dodge a Senate filibuster and pass massive bills related to infrastructure and other Democratic priorities with a simple majority in the Senate.

“I don’t think there’s any question of whether we’d use it, if we had to,” Yarmuth said. “The possibilities are endless. I think you’d want to do it for the biggest possible package you could.”

Rep. Pramila Jayapal (D-Wash.) echoed Yarmuth and said now is the time for progressives to “use every tool” to pass their agenda.

Democrats are emboldened by the end of the Budget Control Act. Without limits on overall total spending for defense and non-defense programs, progressives are eyeing major cuts to defense spending to make room for their expensive domestic agenda.

“This will be a top priority of the progressive caucus — to really get some meaningful budget cuts in Pentagon spending this next cycle,” Jayapal said. “It shouldn’t be considered patriotic to just sign up for more money for defense contractors.”

There is little reason, however, to think that Republicans will do much to cut spending if they win the election. Under President Trump, the budget deficit grew $3.9 trillion — and that was before the coronavirus pandemic. Though the White House claims reducing the budget deficit would be a second-term priority for Trump and Trump’s budgets have repeatedly called for reduced spending, the president has done little to signal to lawmakers he would veto the spending bills Congress sends him.

Dr. Birx says Americans who gathered at Thanksgiving need to assume they’re infected with COVID-19, get tested this week
Biden’s Socialism Will Be Green, Not Red
Trump teases “I’ll see you in four years” to guests at White House reception
Pennsylvania Supreme Court Tosses GOP Lawsuit on Absentee Ballots, Lifts Block on Certification of Election
The Squad Pushes Back after Obama Criticizes ‘Defund the Police’ Slogan