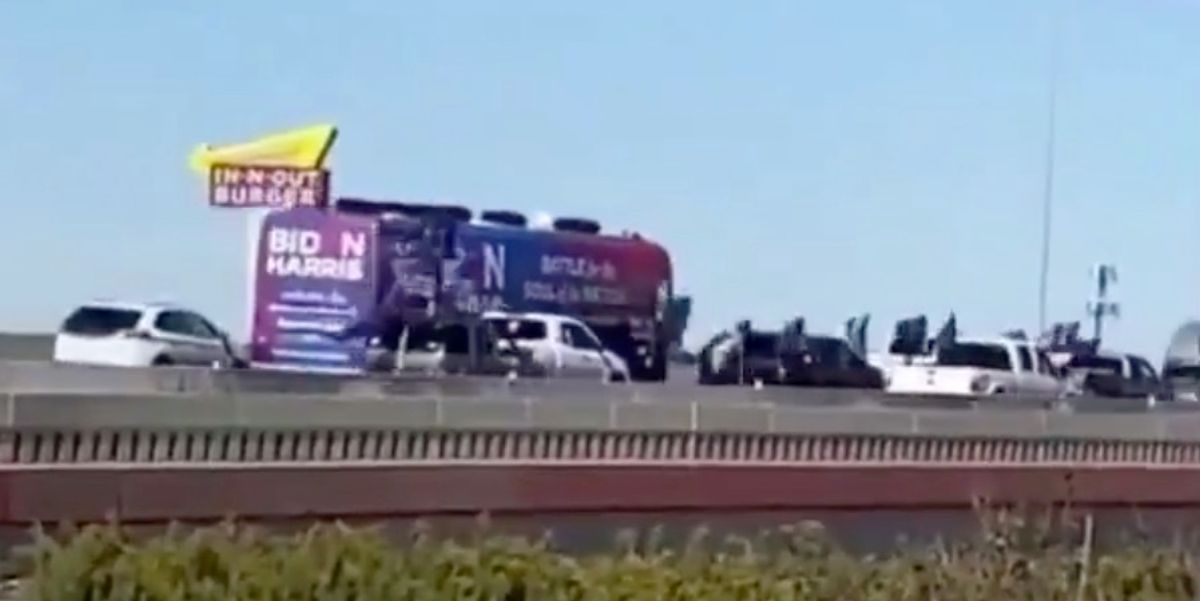 The Joe Biden campaign canceled numerous campaign events across Texas that were scheduled to take place this weekend after the Biden-Harris tour bus received a big Texas welcome from President Donald Trump’s supporters.

Now this is some southern hospitality!

The Biden Bus got trolled so badly by Trump trucks in Texas that they cance… https://t.co/Cn9TjhqSYr

Tariq Thowfeek, Biden for President Texas communications director, claimed that Trump supporters put “our staff, surrogates, supporters and others in harm’s way,” according to KXAN.

Historian Eric Cervini said that he flew to Texas to help the Biden campaign with their events in The Lone Star State ahead of Election Day. He admitted to calling 911 on the Trump supporters, claiming many were waiting to “ambush” the Biden-Harris bus.

I flew down to Texas to help with the Biden/Harris bus tour, intended to drum up enthusiasm at polling locations. Instead, I ended up spending the afternoon calling 911.

See all these pickup trucks with Trump flags? They were sitting along I-35, waiting to ambush the Biden/Harris campaign bus as it traveled from San Antonio to Austin. These Trump supporters, many of whom were armed, surrounded the bus on the interstate and attempted to drive it off the road. They outnumbered police 50-1, and they ended up hitting a staffer’s car.

The police refused to help. When I flagged down one officer, he said his hands were tied: “not my jurisdiction.” He was wearing a blue stripe bandana. Understandably, though nobody was hurt, the rest of the tour was cancelled. And as a historian who studied the rise of the Third Reich, I can tell you: this is how a democracy dies.

Perhaps most appalling, Cervini implied a comparison between Trump’s supporters and Adolf Hitler’s “militia of Brownshirts.”

“While Germany still had elections and Hitler was merely a disgraced politician, his militia of Brownshirts interrupted his opponents’ political meetings and incited violence on the streets. You know what happened next,” Cervini tweeted.

I flew down to Texas to help with the Biden/Harris bus tour, intended to drum up enthusiasm at polling locations. I… https://t.co/po6DHZwvts

WAYNE ROOT: Democrats Don’t Give a Damn About This BLM: “Babies Lives Matter.”
Brian Broome says he thinks ‘conservatives couldn’t care less about whether or not mothers of color terminate pregnancies’
Why Is Biden Looking to Limit Charter Schools in the Midst of an Education Crisis?
Has Starbucks Finally Pushed Me Away?
Court slaps down California ban against selling semiautomatic rifles to young adults